Gallup has been tracking the favorability of unions for decades, and it’s been steadily rising since the recession ended. 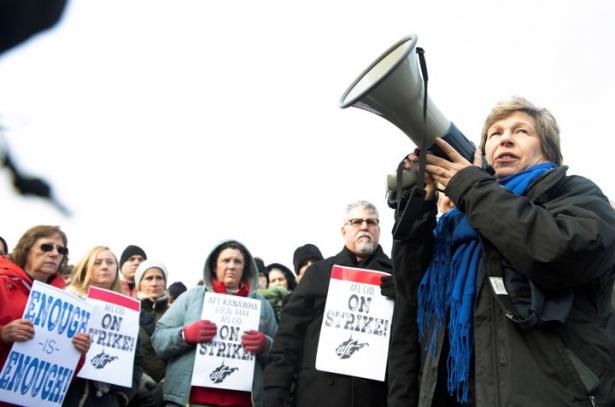 Randi Weingarten, president of the American Federation of Teachers, speaks before a crowd of striking educators at Capital High School in Charleston, West Virginia, in February.,LEXI BROWNING / REUTERS

Membership in labor unions in the U.S. may be on a long, downward slide, but the share of Americans who view unions favorably continues to increase.

Sixty-four percent of people polled by Gallup earlier this month approve of labor unions, one of the highest rates in half a century. Americans have not viewed unions in such a positive light since 2003, when the rate hit 65%.

Gallup has been tracking the public’s feelings about unions since the 1930s. After bottoming out in 2009 at an approval rating of 48% ― the lowest on record ― their favorability has increased steadily over the past decade, as the economy has been on the rise.

Americans now have a more positive view of unions than they generally did in the 1970s, 1980s and early 1990s, though unions still fall short of the marks they hit in the 1950s.

Gallup has found over the years that people’s feelings about unions often move in tandem with the economy. When joblessness rises, respondents tend to say they disapprove of unions and their role in the U.S. workplace, which may be why the approval rate reached its nadir during the Great Recession.

But when the unemployment rate falls ― it now stands at just 3.7% ― respondents are more bullish on organized labor and how it can shape the American job market. 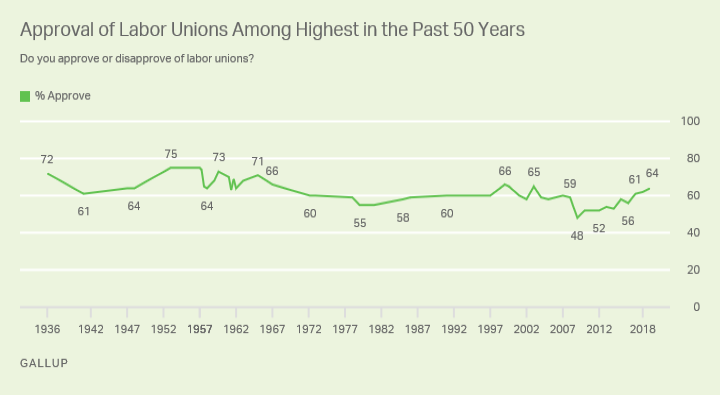 Not surprisingly, Democrats are still more likely to approve of unions than Republicans are, at 82% and 45% respectively.  But rates for both party affiliations have climbed by 16 points since the recession ended.  Independents approve of unions by a rate of 61%, up 17 points over the same period.

Those most familiar with unions are more likely to have favorable views of them. According to Gallup, there was an 86% approval rate in union households, compared with 60% in nonunion households.

Age also plays a factor: The younger the respondent, the more likely they were to have a positive view of unions. Sixty-seven percent of people between ages 18 and 34 approved of unions. The rate was 64% for those between 35 and 54, and 61% for those 55 and older.

While the public perception of unions may be improving on the whole, the strength of unions has been eroding for decades. Roughly one in every three workers was a union member in the mid-1950s, at the height of organized labor’s power. Now that number is more like one in 10. (Only 14% of Gallup respondents said there is a union member in their home.) The membership rate is especially dismal in the private sector — just 6.4%, compared to 33.9% among government workers, according to the Bureau of Labor Statistics.

Nonetheless, unions have appeared to experience a bit of a resurgence, particularly with the massive teacher walkouts that rocked states across the country last year. More workers went on strike in 2018 ― 485,000 of them ― than in any year since 1986. And although the majority of those were teachers, many strikers also came from the private sector, from companies like Marriott, Frontier Communications and AT&T.

Dave Jamieson has been HuffPost's labor reporter since 2011. Before joining the D.C. bureau, he was a staff writer at Washington City Paper and a freelancer contributing to Slate, the New Republic, the Washington Post and Outside magazine, among other outlets.