Jellyfish is the latest dish cooked up by gastrophysicists, who combine food science and physics to change the appearance, feel, and taste of what we eat. 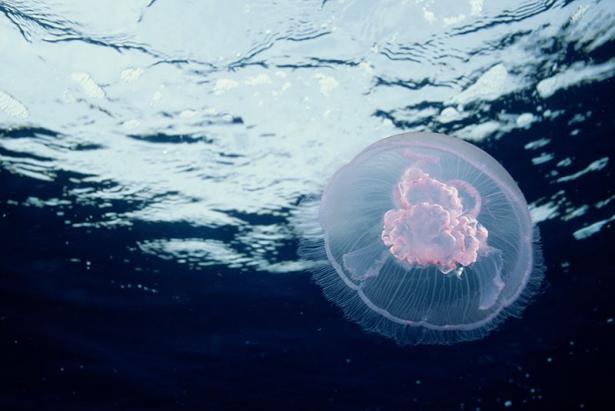 In Asia, many jellyfish species find their way into cuisine. The largely tasteless animals are used predominantly for their texture., David Fleetham/The Image Bank/Getty Images Plus

It is a dining event like no other. Your ears fill with the sounds of crunching snow and crumpling paper while ripples of light cascade across your plate. And then, you pop into your mouth something once described as having the texture of both a cucumber and a condom: a jellyfish. Welcome to sustainable seafood for the climate change era.

Ryujin’s servant, a jellyfish-based dish—or, really, an experience—is on the menu at the London, England experimental restaurant of Kitchen Theory run by chef Jozef Youssef. As diners eat the jellyfish—tentacles removed, cured, seasoned, cut into strips, and served alongside fermented cucumber—they wear headphones to get the most from the soundscape while images of swimming fish are projected onto the table.

It’s the latest dish cooked up by gastrophysicists, who combine food science and physics to change the appearance, feel, and taste of what we eat. Ryujin’s servant is an attempt to harness a light and sound show to persuade people in Western countries to eat a traditionally Asian food. Details of the dish, including the recipe and the accompanying ambiance, are revealed in a recent scientific paper.

“We often forget that eating is something that requires us to use all of our senses,” says Steve Keller, the sonic strategy director for Pandora, a streaming music platform based in California, who helped design the experience. “This is a way to hack our perception of flavor to make jellyfish more pleasing to a Western palate.”

The intricate effort to make jellyfish appetizing to new audiences arrives as people around the world grow increasingly annoyed by jellyfish blooms, in which vast swarms of jellyfish seem to appear out of nowhere. On the west coast of the United Kingdom, jellyfish the size of sewer covers are appearing as oxygen levels and predator populations fall and pollution and temperatures increase. In response, governments have released jellyfish-eating fish and turtles into their waters, sent out spotter boats to locate the swarms, and set up dedicated phone lines to report them. Jellyfish, the paper notes, could be “one of the few foods that we could remove from the sea that would have a net positive effect.”

But getting people to eat jellyfish isn’t easy. Charles Spence, a psychologist at Oxford University in England who helped study diners’ reactions to the experimental dish, says people’s perceptions of new foods are heavily influenced by the first time they try them. So, if people in the West are to take to jellyfish, it’s important to make their first exposure as positive as possible. “We can try to make jellyfish a feel-good food,” he says. The reaction to the dish, its creators report, has been uniformly positive.

Spence has tried jellyfish several times. “It has no taste at all. It’s just the crunch that gets you,” he says. “Nothing else is wet and crunchy at the same time.”

Crunchiness is one of the food’s most appealing attributes, but it’s not the jellyfish’s natural state. This crunch comes from the way Asian cooks have prepared jellyfish for centuries—by soaking it for a month in a salt solution, a process similar to the tanning of leather. Scientists in the West have turned to gastrophysics to find a way that takes a lot less time.

A team led by Mie Pedersen at the University of Southern Denmark in Odense has discovered that dropping jellyfish into 95 percent alcohol can turn them into crunchy crisps. Pedersen just published a technical analysis of the process, which she calls the point where “soft matter physics meets the culinary arts.”

Thomas Vilgis, a gastrophysicist at the Max Planck Institute for Polymer Research in Mainz, Germany, who worked with Pedersen, says that by using their process, jellyfish can even be given new flavors, such as strawberry, by adding them to the alcohol.

Taste and texture aside, Vilgis says there are other factors that may make people consider adding jellyfish to the menu. For example, the ethical qualms some people have about cooking live lobster by dunking them into boiling water don’t apply to jellyfish, Vilgis says, because they have no brain or heart and cannot feel pain.