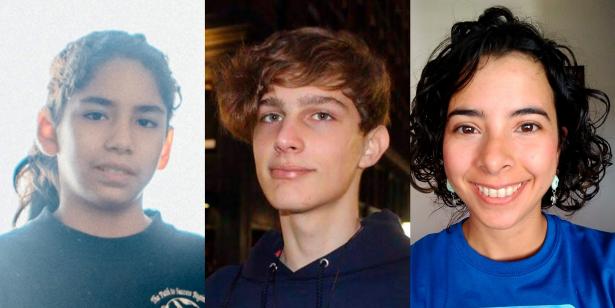 One of the most important moments in 16-year-old Tristán Queriot Rodríguez Vélez’s climate activism came at the international airport in San Juan, Puerto Rico, in mid-July. Puerto Rico’s former secretary of education, Julia Keleher, was flying back to the island from Washington, D.C. to stand before a federal judge and confront corruption charges. Rodríguez Vélez and the other protesters had come to welcome her back. Before Hurricane Maria hit, Keleher had already ordered the closure of 183 schools, and in its aftermath, she simply never reopened more than 250.

Not long afterward, the Center for Investigative Journalism released hundreds of text messages from Roselló and his inner circle, including a joke from his former chief finance officer about the bodies that had piled up in morgues in the wake of Hurricane Maria. Hundreds of thousands of people poured into the streets for two weeks until Roselló stepped down.

Two years to the day after Hurricane Maria made landfall in Puerto Rico, Rodríguez Vélez will join the international climate strike on Friday, skipping school to rally in front of Puerto Rico’s capitol building in San Juan with students from numerous high schools, universities, and elementary schools, alongside adult allies. The global day of action centers around the experience of the first generation to come of age at a time when the impacts of the climate crisis are undeniable.

The climate strike movement may have been inspired by Swedish activist Greta Thunberg, but the most powerful youth-led climate movement of the moment may actually be in Puerto Rico. In the island territory, the climate strike generation has a name: “la generación del ‘yo no me dejo,’” or “the generation of ‘I’m not going to let you do this to me.’” They’ve also been called the “Maria Generation.” They’re part of a subset of the climate strikers whose way of seeing the world will be forever shaped by their early experiences of a climate-driven disaster.

The storm, said Rodríguez Vélez’s 17-year-old classmate, Fernando Ramírez, “gave us not only a sense of what’s in us, but also a reality check telling us that climate change is real — to tell us that we need to fight.”

In New York, 13-year-old Marisol Rivera, who will also be striking Friday, has had her entire life shaped by the impacts of disasters. She was 5 years old when her home in Brooklyn was destroyed by Superstorm Sandy. “I don’t remember a lot of Sandy, but what I do remember is me waking up to my mom telling me that we can’t stay at the house anymore,” she said. She got out of bed and looked behind her. “The ceiling had collapsed on my bed that I was laying on seconds ago.”

Her mother, Rachel Rivera, has been active in the climate movement ever since. She said it took around seven years for the family to truly feel like they were back in a home that was a home. They lived in a hotel for a year, and then for a few years in an apartment infested with insects and rodents. Marisol has been treated for PTSD related to the trauma of the storm and subsequent displacement. “It’s our new normal,” said her mother.

Then, in 2017, Maria hit Puerto Rico. A friend of the family died, the home of Marisol’s aunt was reduced to its foundation, and her grandmother struggled to access insulin to treat her diabetes. Marisol grew up visiting Puerto Rico. “That’s basically my second home right there. That’s where I first learned how to walk,” she said. “Now I have two places that I’ve known as home ruined.”

To 18-year-old Nyiesha Mallett, a youth organizer with the Brooklyn climate justice organization Uprose, the climate strike participants who have experienced the impacts of the crisis firsthand hold the knowledge essential to navigating the emergencies ahead. She’s involved in organizing a Frontline Climate Strike that will include representatives from numerous communities impacted by climate disasters, including Puerto Rico and New Orleans.

Uprose works with the neighborhood of Sunset Park, which was hit hard by Sandy and includes a significant Puerto Rican community whose family members were also hit by Maria. In Sunset Park, climate activism means developing survival strategies. After consultations with residents, organizers have been working to identify “block captains” who know everybody in the neighborhood and can identify who will need the most help when the next storm comes. They’re working with auto shop owners in the area to reduce their use of toxic chemicals, so when there’s a flood, their neighbors are hurt less.

Twenty-eight-year-old Amira Odeh, who has long been an environmental activist and is involved in organizing the Puerto Rico climate strike, saw what it means to suddenly become a front-line organizer. Her thinking around climate changed dramatically after Hurricane Maria. “I never doubted it. I always knew it was real,” she said. “It’s not the same seeing it in the news and reading it on paper as actually living it and asking yourself, Can I live through this again?”

When the winds started to blow two years ago, Odeh was staying with her grandmother, who began to have an anxiety attack. After taking medication, her grandmother slept through most of the storm. As the water began to come through her closed windows, Odeh texted with a group of friends to avoid feeling alone. “I started texting with them at midnight, and every hour that passed, a different friend stopped texting, and that meant that the cellphone towers were coming down. The last text I got from a friend was at 6:30 a.m.” She could hear her two cats meowing in the other room, but the wind pressure on her door was so strong that she couldn’t open it to let them in. It lasted for eight hours.

Then came the aftermath: “this eternal loop of trying to get food, get water, and nothing else. You couldn’t even sleep because it was so hot; it was unbearable to sleep in the heat and the sweat and the mosquitos annoying you. It was extremely tiring, and you kept hearing on the news and the radio more and more bad news,” she said. “The power company started to release this map of the places where they were restoring power, and you kept seeing the map grow, and that gave people a bit of hope. But once the power was restored, it was just makeup over the ruse. Power was back, water was back, but you kept seeing a bunch of people unemployed.”

After the storm, for Odeh, the climate crisis was “not just urgent, it’s scary on top of that. It’s my life and the people I love and the places I care about. It’s not being able to imagine yourself in a stable future because there’s so much uncertainty around it,” she said. “You have to plan, I need to buy a house in a place where I can farm in case a next disaster happens, and I need to grow my own food to survive. I don’t think that’s the way anyone should have to visualize their own future.”

Back in New York, 18-year-old Aryaana Khan, who used to miss school routinely because of flooding in her home country of Bangladesh and later missed school when Sandy hit her home in New York, worries for a future when her country may become all but unlivable. “As a Bangladeshi American, my biggest fear is that because of climate change, my identity will be further erased,” she said. “I wonder what identity crisis my people are going to go through when that land is gone.”

“Honestly, most days I feel hopeless, and I know that’s not something I’m supposed to say as someone that does climate work,” said Khan. “The only way I do restore hope is by having conversations with other people that are also doing this work.”

Odeh has found a similar kind of solace. She was a part of the movement to oust Roselló, and since then, she’s participated in the community assemblies that have popped up in municipalities across the island in the wake of the protests. In her city of Bayamón, assembly members have split into different groups who are talking about a potential climate plan for the municipality, transparency initiatives to confront corruption, and how to address the lack of public transportation. “It’s great to see people that didn’t know each other, that went to those meetings not knowing anyone, planning together, meeting at each other’s houses, designing presentations, plans, and timelines to build their dream cities,” she said.

Rodríguez Vélez is optimistic. “I think it’s going to be so great when people my generation start being elected,” he said. He’s not sure if he’ll go to college in Puerto Rico or the mainland United States, but he said he’s committed to growing old on his island. “When I end up growing old,” he said, “I am most definitely planning once again to uplift the voices of young people, who will continue to be effected more than old me by whatever new crisis is going on.”

This story is part of Covering Climate Now, a global collaboration of more than 250 news outlets that aims to strengthen coverage of the climate crisis.

Alleen Brown is New York-based reporter, focused on environmental justice issues. Prior to joining The Intercept, she worked as an education reporter in Minnesota. Her work has been published by The Nation, In These Times, YES! Magazine, and various Twin Cities publications.