Elites are finding more ways to ensure that their children never run out of chances to fail. 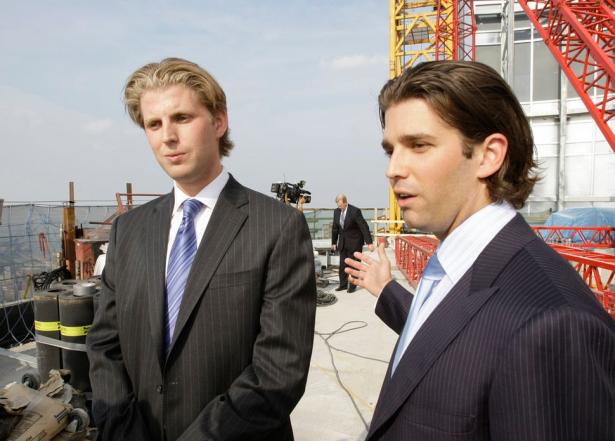 In 2014, Zach Dell launched a dating app called Thread. It was nearly identical to Tinder: Users created a profile, uploaded photos and swiped through potential matches.

The only twist on the formula was that Thread was restricted to university students and explicitly designed to produce relationships rather than hookups. The app’s tagline was “Stay Classy.”

Zach Dell is the son of billionaire tech magnate Michael Dell. Though he told reporters that he wasn’t relying on family money, Thread’s early investors included a number of his father’s friends, including Salesforce CEO Marc Benioff.

The app failed almost instantly. Perhaps the number of monogamy-seeking students just wasn’t large enough, or capping users at 10 matches per day limited the app’s addictiveness. It could also have been the mismatch between Thread’s chaste motto and its user experience. Users got just 70 characters to describe themselves on their profiles. Most of them resorted to catchphrases like “Hook ’em” and “Netflix is life.”

After Thread went bust, Dell moved into philanthropy with a startup called Sqwatt, which promised to deliver “low-cost sanitation solutions for the developing world.” Aside from an empty website and a promotional video with fewer than 100 views, the effort seems to have disappeared.

And yet, despite helming two failed ventures and having little work experience beyond an internship at a financial services company created to manage his father’s fortune, things seem to be working out for Zach Dell. According to his LinkedIn profile, he is now an analyst for the private equity firm Blackstone. He is 22.

Most accounts of this trend focus on the breakdown of upward mobility: It’s getting harder for the poor to become rich. But equally important is the decline of downward mobility: The rich, regardless of their intelligence, are becoming more likely to stay that way.

“There’s a lot of talent being wasted because it’s not able to rise, but there’s also a lot of relatively untalented people who aren’t falling and end up occupying positions they shouldn’t,” said Richard Reeves, a Brookings Institution researcher and the author of “Dream Hoarders: How the American Upper Middle Class Is Leaving Everyone Else in the Dust, Why That Is a Problem, and What to Do About It.″

“If we were becoming less of a class-bound society, stickiness at the top should have gone down,” Reeves said. “But the evidence shows that it’s gone up.”

This phenomenon — Reeves calls it “the glass floor” — has taken on a new political urgency. Over the last two years, Donald Trump has put his family members in charge of child care policy and Middle East peace. Hunter Biden’s Ukrainian board membership has highlighted how corporations and foreign governments seek to influence elected officials through their children.

And who can forget Koch nephew Wyatt and his line of $79 floral button-ups?

But billionaire heirs are only a tiny part of the problem. Over the last 30 years, nearly every institution of social mobility, from education to work to government spending, has been systematically tilted toward the wealthy. Rather than sending our most brilliant minds up the income ladder, America is ensuring that the wealthy, no matter their mediocrity, retain their grip on the highest rung.

“The sense that there’s a self-sustaining and self-dealing group at the top isn’t wrong,” Reeves said. “When you create a ‘meritocratic’ selection process where the production of merit is increasingly skewed by parental income, you end up with a hereditary meritocracy.”

The rich, in other words, are not sending their best. And the more institutions they control, the more of their kids will be running the country.

Last month, a Duke University study revealed that 43% of white Harvard students were not admitted on merit. They were ALDCs: recruited athletes, legacies, students on the dean’s interest list, and children of faculty and staff. The “dean’s interest list” is a roster of applicants with ties to wealthy donors.

The study — and the racial discrimination lawsuit that forced Harvard to reveal its admissions data — demonstrated the extent to which elite universities concentrate the privilege of their already-privileged students. To pick just a few representative statistics, children from the top 1% of the income distribution are 77 times more likely to attend Ivy League schools than the poorest 20%. Harvard’s class of 2022 includes more legacy students than African American students.

But when it comes to social mobility, the outsized scrutiny of the top-tier colleges conceals a much larger problem. Harvard, Stanford, Yale and Princeton admit only a tiny number of students each. In 2016, the University of Washington enrolled more low-income applicants than the entire student bodies of all four colleges combined. Among the nation’s top 10% of income earners, fewer than 1 in 20 attended the tiny number of “Ivy-plus” universities. Even if those elite schools enrolled low-income students exclusively, America’s abysmal social mobility statistics would barely budge.

The more important engine of elite entrenchment is the group of selective colleges that sit one rung lower in the rankings. More than half the children of the top 0.1% of income earners attend these schools, compared with fewer than 1 in 50 poor children.

Having a college degree is most beneficial to the kids who aren’t that smart. Richard Reeves, Brookings Institution researcher

Over the last 20 years, selective universities have become just as dominated by the wealthy as the elite colleges — while receiving a fraction of the attention. Notre Dame, the University of North Carolina and the University of Southern California, for example, admit higher percentages of legacy students than Princeton. Thirty-eight colleges — including upper-crust mainstays Colgate and Tufts — admit more students from the top 1% than from the bottom 60%. At Washington University in St. Louis, the worst offender, the ratio is 3-to-1.

Public colleges are subject to the same trend. In 2017, University of Georgia students had a median family income of $129,800. Two-thirds of the students at the University of Michigan came from the richest fifth of the income distribution; just 1 in 30 came from the poorest fifth.

“This is what inherited wealth looks like for the top 20%,” Reeves said. “You don’t save your money and give it to your kids as a bequest. You spend it on your kids so they don’t need the bequest. It’s an upfront investment.”

But as universities tilt their admissions toward the wealthy, Reeves said, they aren’t just leaving talented low-income students behind. They’re also lifting mediocre rich students up. A 2005 study found that wealthy middle-schoolers with the lowest standardized test scores were more likely to graduate from college than poor middle-schoolers with the highest scores. Students with average SAT results are nearly six times more likely to be admitted to top-tier universities if their parents are alumni. One of Reeves’ studies found that 43% of the members of upper-class households had skills and intelligence that predicted lower incomes.

“Having a college degree is most beneficial to the kids who aren’t that smart,” Reeves said. Intelligent kids will have thousands of opportunities to demonstrate their skills. Less-talented kids, on the other hand, have to rely on credentials that make them seem intelligent — high SAT scores, top-tier diplomas and corporate internships.

As elites take over selective colleges, invest more in test-prep courses and reserve entry-level jobs for their peers, they will continue to monopolize these credentials for themselves.

The U.S. economy produces fewer secure, well-paying jobs than it used to. Most American industries are consolidating into a few dominant players. Technology, globalization and outsourcing have pushed entry-level and support roles out to low-wage workers.

This leaves a growing number of Americans competing for a shrinking number of jobs. And all the evidence indicates that corporations are reserving them for people who are already wealthy.

In 2016, researchers sent hundreds of résumés to high-end law firms. They were identical in degrees and grade-point averages, but researchers tweaked the extracurricular activities to make some candidates seem rich (sailing, classical music) and others seem poor (track and field, country music). At the end of the study, upper-class men had been invited to 12 times more interviews than lower-class men.

Other studies have found similar class-based sorting practices in elite professions. In a 2012 survey, more than half the hiring managers in corporate law and finance firms said “cultural fit” was their No. 1 criterion for assessing candidates in job interviews. Some human resources managers screened out qualified candidates who had the “wrong” extracurricular activities. Others admitted to throwing out applicants without elite college credentials.

And then there’s the nepotism. According to a 2011 study, 70% of boys born into the top 1% of income earners ended up working at their father’s company at some point in their lives, a larger percentage than other income brackets. In 2006, researchers found that nearly one-third of new CEOs were hired through a family connection.

There’s a fixed number of people who will be upper class in the future, and elites have the tools to make sure that their children are among them. But the more power they have and the more they’re worth, the more damaging it will be to everyone else. Joseph Fishkin, author of “Bottlenecks: A New Theory of Equal Opportunity”

There is, of course, nothing special about human beings showing favoritism to their friends and relatives. But, according to Joseph Fishkin, a University of Texas at Austin professor and the author of “Bottlenecks: A New Theory of Equal Opportunity,” the rise of inequality has created a vicious cycle. The harder life gets for people at the bottom of the income distribution, the more desperate elites become to preserve their status for their children.

“The greater the inequality, the greater the impact on opportunity,” Fishkin said. “There’s a self-fulfilling class anxiety among the middle- and upper-middle class because they sense that the spaces are scarce now. There are fewer secure jobs. And the scarcer they are, the more valuable they are.”

And though it may be understandable for wealthy parents to use their power to insulate their children from downward mobility, the broader effect of this trend could be severe. According to Reeves, dozens of studies have estimated the negative effects of failing to tap into the talents of low-income students. Far fewer, however, have considered the drag on the gross domestic product caused by unintelligent CEOs and Ivy League HR staffers hiring people just like themselves.

“No one is in favor of downward mobility,” Reeves said. “But if there isn’t enough circulation of elites at the top of their professions, you’re going to get stagnation.”

There is also the question of diversity. If social mobility continues to fall, America’s ruling class will become increasingly insular, considering almost exclusively the perspectives of wealthy heirs and elite college graduates. Already, 90% of families that earn over $118,000 per year are white. Of the 102 new senators and representatives elected in 2018, more than half attended the most selective colleges in the country. Eight of the nine Supreme Court justices graduated from just two law schools.

“There’s a fixed number of people who will be upper class in the future, and elites have the tools to make sure that their children are among them,” Fishkin said. “But the more power they have and the more they’re worth, the more damaging it will be to everyone else.”

In 2012, Zach Dell was featured on the Rich Kids of Instagram social media account, growling at the camera as he ate a four-course meal on a private jet. His sister Alexa, now a “branding consultant” for the dating app Bumble, captioned the picture “Snachary en route to Fiji.”

After the picture was widely mocked online, Alexa and Zach shut down their media accounts and have made few public statements since. In a rare interview five years later, Alexa was asked about the advice she got from her father growing up.

“Hard work,” she said, “is really the foundation of success.”