Sound of a Coverup: Vindman Was Told to Keep Quiet 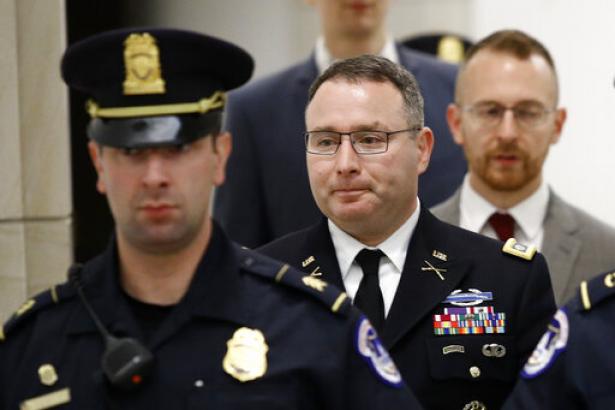 Vindman told House lawmakers Tuesday that after he expressed his concerns about the July 25 call, John Eisenberg, a top NSC legal adviser, told him to tell no one about his reservations, according to sources familiar with the testimony. Trump’s call — in which he pressed Ukraine President Volodymyr Zelensky to launch an investigation into his political rival Joe Biden and his son — is now the focus of an impeachment inquiry by the House. Trump was withholding U.S. military aid to Ukraine at the time of the call.

Vindman said Eisenberg took notes on a yellow legal pad about his concerns. Then Eisenberg and his deputy Michael Ellis decided to move a rough transcript of the call to a highly classified computer server, Politico reported. Days later, Vindman testified that Eisenberg instructed him to keep quiet about the call.

The startling information exposes significant early concern within the White House about Trump’s call — but also reveals possible efforts to keep the contents under wraps not only through use of the classified server, which was first reported by the Post, but by instructing at least one official to keep it quiet.

Trump has repeatedly characterized his phone call with Zelensky as “perfect.” But one of the Post’s sources asked: “If this is such a perfect call, why is everybody going to these extraordinary lengths? Why is the White House counsel telling people not to talk about it?”

Vindman, the first witness to testify in the impeachment inquiry who personally listened to Trump’s call, testified that he was troubled about what he viewed as the president’s quid pro quo demands for a Biden investigation in exchange for U.S. military aid.

Vindman also told lawmakers that the White House’s reconstruction of the conversation had key omissions, The New York Times reported.

The NSC and Eisenberg have not responded to reports that Vindman was ordered to keep quiet.