Marie Yovanovitch Explains How Trump Opened the Door for Corruption

“Shady interests, the world over, have learned how little it takes to remove an American ambassador who does not give them what they want,” Yovanovitch testified on Friday 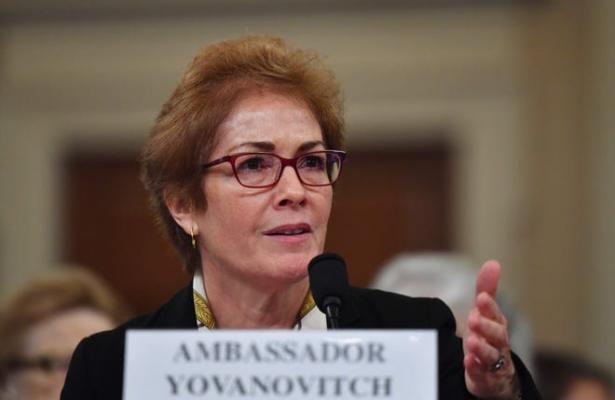 Over hours of testimony, Marie Yovanovitch described how the Trump administration bought into and advanced a coordinated campaign of lies about her launched by a Ukrainian official accused of corruption, right-wing pundits and Trump’s own lawyer. Trump warned that Yovanovitch was “going to go through some things” on his now-infamous July 25 call with Ukrainian President Volodymyr Zelensky.

Even as Yovanovitch testified, Trump continued to attack the career foreign service officer who had served under every president since Ronald Reagan. “Everywhere Marie Yovanovitch went turned bad,” he tweeted. The president’s live commentary led House Intelligence Committee Chairman Adam Schiff (D-Calif.) to interrupt the hearing and ask Yovanovitch what she thought of his tweet. “It’s very intimidating,” she said.

But Trump’s attacks only bolstered Yovanovitch’s argument. As Trump tweeted, Yovanovitch told Congress that although the campaign against her was not based in fact, Trump had given U.S. enemies worldwide a road map for how to remove U.S. officials they don’t like.

“Shady interests, the world over, have learned how little it takes to remove an American ambassador who does not give them what they want,” Yovanovitch testified on Friday.

The process Yovanovitch described is simple:

Late last year, the ambassador began hearing from Ukrainian officials that Giuliani was in touch with Yuriy Lutsenko, Ukraine’s prosecutor general at the time. In an earlier closed-door hearing, Yovanovitch testified that a senior Ukrainian official had told her that “I really need to watch my back.” She was told that Giuliani and Lutsenko “had plans, and that they were going to, you know, do things, including to me,” she said.

Giuliani and his associates started planting false rumors that Yovanovitch was an Obama administration loyalist who used her post in Ukraine to undercut Trump. The false allegations became public in March when Solomon quoted Lutsenko claiming that Yovanovitch gave him a list of people he should not prosecute. The claim — which Lutsenko later retracted — helped fuel right-wing rumors that Democrats had pressured Ukrainian officials to ignore wrongdoing by former Vice President Joe Biden and his son Hunter, who sat on the board of a Ukrainian gas company headed by an oligarch accused of corruption.

Trump — who believes he is the victim of a so-called deep state conspiracy by Democrats who colluded with Ukraine to block him from becoming president — was receptive to this false rumor. He and his son both tweeted about Solomon’s story shortly after it went up. (The Hill has not updated Solomon’s original story to reflect Lutsenko’s retraction.)

Yovanovitch knew it would be impossible for her to effectively represent U.S. policy in Ukraine with the president and his son publicly denouncing her, she testified on Friday. She tried to get Secretary of State Mike Pompeo to issue a statement of support but learned that he declined to do so out of concern that Trump would undermine that statement in another tweet.

Soon Yovanovitch began hearing ominous warnings about “concern” from her colleagues back in Washington. She received a phone call at 1 a.m. in April, after hosting a dinner honoring a Ukrainian anti-corruption activist, ordering her to take the next flight back to D.C. Once she returned, she met with Deputy Secretary of State John Sullivan, who told her Trump had lost confidence in her.

“Individuals ... were able to successfully conduct a campaign of disinformation against a sitting ambassador, using unofficial back channels,” Yovanovitch said Friday. “They shared baseless allegations with the president and convinced him to remove his ambassador, despite the fact that the State Department fully understood that the allegations were false and the sources highly suspect.”

Yovanovitch asked Sullivan how he would explain her removal from Ukraine. “Everybody is watching,” she said. ”If people see that I, who have been promoting our policies on anti-corruption — if they can undermine me and get me pulled out of Ukraine, what does that mean for our policy?”

Sullivan didn’t have an answer, she testified.

Yovanovitch said her ouster sets a dangerous global precedent. “When other countries, other actors … see that private interests, foreign interests can come together and get a U.S. ambassador removed, what’s going to stop them from doing that in the future in other countries?”

Trump’s crusade against Yovanovitch wasn’t limited to derailing her career. The president told his Ukrainian counterpart Volodymyr Zelensky that Yovanovitch was a bad ambassador and that “she’s going to go through some things,” according to a White House transcript of a July 25 phone call. During that same call, Trump praised Lutsenko, the prosecutor-general who helped spread false information about Yovanovitch and who was dismissed by Ukraine’s parliament the following month.

Yovanovitch first learned about Trump bad-mouthing her to another foreign leader when the White House released the call transcript in September. It felt like a vague threat from the president, she said on Friday.

Trump, whose spokesperson said the president didn’t plan on watching Yovanovtich’s testimony, continued attacking the former ambassador as she testified. “She started off in Somalia, how did that go?” he tweeted during the hearing.

Asked by Schiff if Trump’s real-time attacks would influence other witnesses’ willingness to testify in the impeachment inquiry, Yovanovitch responded, “I can’t speak to what the president is trying to do, but I think the effect is to be intimidating.”

Trump denied his tweet constituted witness intimidation. “I have the right to speak, I have freedom of speech, just as other people do,” he said.

“The whole hearing turned on a dime when Trump tweeted about her,” Baier said. Trump’s tweet allowed Schiff to characterize the president’s behavior as witness intimidation or witness tampering, Baier continued. “Adding essentially an article of impeachment [in] real time as this hearing is going on.”