The United Kingdom’s chalky soil is all-but identical to the soil in the Champagne region, but its climate simply couldn’t compete--until recently. As average temperatures rise and extreme weather events become more common, vintners must adapt. 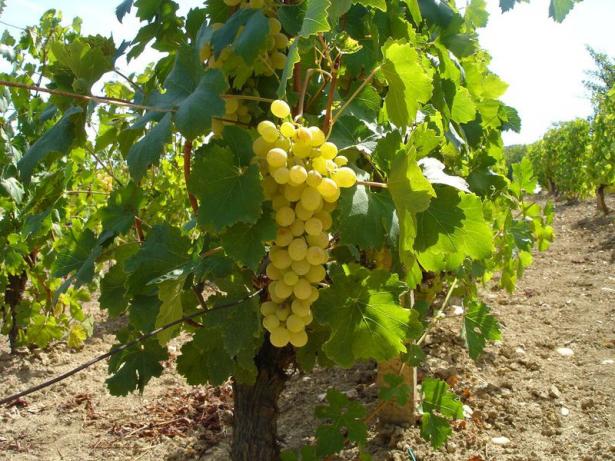 Changing temperatures affect how quickly wine grapes ripen, how sweet they are, and how much acid they have, all of which influences the quality of the end product, Македонец via Wikicommons under CC BY-SA 4.0)

In the spring of 2016, something happened that sent the wine community into a bit of a tizzy: In a blind tasting, a selection of English sparkling white wines were chosen over comparable French champagnes. In fact, some of the experts gathered at the tasting—including well-regarded French tasters—believed the English wines they tried were actually French.

The vinous upset shouldn’t only alarm wine aficionados. While English sparkling wines’ new challenge to French champagne is undoubtedly due to the hard work of its winemakers, it’s also due, in no small part, to climate change. While the United Kingdom’s chalky soil is all-but identical to the soil in the Champagne region, its climate—until very recently—simply couldn’t compete.

The U.K.’s cold, wet conditions have turned ever-so-warmer, giving English wines an edge. Some winemakers have become climate scientists in their own right, adapting to and experimenting in new and changing weather patterns.

Since 1900, many regions of Western Europe—including the U.K. and France—have seen their average temperatures rise by about 3 degrees Celsius, says Martin Beniston, a climate change expert and honorary professor at the University of Geneva. But in the last two decades, heat waves have caused record-breaking temperature spikes, including a 46.1 degrees Celsius—or 114.98 degrees Fahrenheit—day last July in Provence, France.

Summer droughts have become common in the last 10 years in both the U.K. and France, Beniston says, which, combined with extreme heat, can be detrimental to plant growth and survival. “Cold waves are decreasing in parallel to the increase in heat waves,” Beniston says. “Today, we see record heat events outnumber cold temperature events by between 6:1 to 15:1,” and heat waves are moving northward.

In the Champagne region specifically, the average temperature has increased by 1 degree Celsius in the last half-century, says Valéry Laramée de Tannenberg, a climate change expert and author of Threats to Wine: The Challenges of Climate Change. The increase might not sound like much, but one degree makes a huge difference in the production of Champagne’s grapes. Hotter summers, long-lasting droughts, and unexpected weather events—such as record-breaking heat waves and sudden spring frosts—have presented challenges to Champagne growers. Last year, the award-winning Champagne producer Drappier lost 8 percent of its grapes following a spring frost and another 15 percent after the record-breaking July heat wave, says Michel Drappier, president of the company.

Champagne Gallimard has a similar story: The winery saw a 13,000-kilogram (28,660-pound) yield eight years ago, says winemaker Didier Gallimard, but “today it’s 10,000 kilos.” He says that 20 percent of the grapes the winery harvested this year were totally dried out “due to the hot temperatures.”

Farther north, warmer temperatures have benefited the U.K.’s sparkling wine regions, which include Kent, East and West Sussex, Hampshire, Dorset and Cornwall. Previously, soil alone wasn’t enough to give English sparkling wines a boost over French champagnes. Patty Skinkis, a viticulture specialist at Oregon State University, says that “the growth and yield of a grapevine is dependent on the soil, water inputs and environment combined.” With the ideal soil composition already in place, English sparkling wines got a boost from the warmer weather.
“Temperature is arguably the most important variable that affects grape composition and wine style and wine quality,” says Greg Dunn, a curriculum manager of the wine division at Plumpton College. “Climate change has led to parts of the U.K. experiencing similar growing temperatures to those in Champagne 60 years ago. This gives us a good start … to make high-quality sparkling wine—fruit with a sugar and acid balance ideally suited to sparkling wine.”

Even so, the U.K.’s sparkling wine producers are also struggling to adapt to climate change. The change in temperature—paired with a lack of weather predictability—is forcing winemakers to adapt year by year rather than having a standard, trusted formula for grape growth and harvest.

At Gusborne—one of the sparkling wine producers that trumped French champagne in the blind taste test—head winemaker Charlie Holland says that he’s observed a dramatic change in grape composition in recent years. “As a result of increased average temperatures, we are now seeing increased levels of ripeness in our grapes, meaning higher sugars, lower acidity, and a riper flavor profile,” he says. Those changes have “allowed us to produce wines to a level of ripeness that simply wasn’t possible 20 to 30 years ago,” he says. But “with climate change also comes changeable and unpredictable weather patterns, making it very difficult to forecast and adapt farming techniques accordingly.”

For example, spring frosts during bud-bursts have increased, so the winery has had to invest in cold air drains—what Holland describes as “huge horizontal propeller fans that are able to evacuate cold air from the coldest parts of the vineyard and expel it 90 meters up into the air to break up the inversion layer.”

In 2016 and 2017, despite its best frost-protecting efforts, Hattingley Valley lost 90 percent of its buds, says head winemaker Emma Rice. “Conversely, 2018 was exceptionally warm,” she says. “We had a few sites that almost got too ripe for sparkling wine, and the harvest was one of the earliest on record for English vineyards.”

Hattingley Valley has adapted to climate change by sourcing its grapes from a diverse portfolio of partner vineyards all over the south and southeast of the U.K., an effort that seems to have offered the winery some protection. “Suppliers in Kent produced ripe, clean, and abundant fruit, whilst some vineyards in Berkshire and Hampshire produced nothing at all,” Rice says.

Otherwise, “we have invested heavily in frost protection, gas burners, bougies—[large candles that produce heat]—trials with cloches and heated water pipes, netting to trap warm air, and ventilation to allow cold air to escape,” she says. “With a ‘normal’ spring frost of minus 1 or 2 degrees Celsius, we can handle it. When we get events like minus 6 Celsius in 2016 and 2017, we don’t stand a chance.