Trump is now remaking his administration as a government version of the Trump Organization, where he only tolerates sycophants 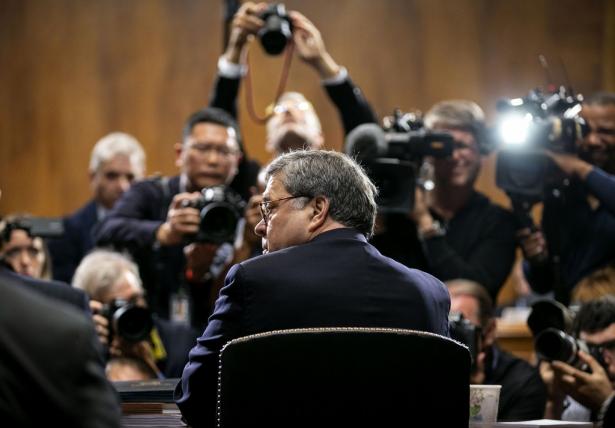 Attorney General Barr, who claims to work for the Justice Department, is in fact the personal lawyer for the Trump family criminal organization. He has taken the place of Michael Cohen, a two-bit crook now in prison, who never quite lived up to the standards of criminality and viciousness set by Cohn.

Cohn, of course, was Sen. Joseph McCarthy’s top lieutenant at the height of the witch-hunting anti-communist paranoia of the 1950s. He went on to become Trump’s personal lawyer and mentor, helping him become a shameless, loudmouthed bully who fought off countless lawsuits and investigations into his shambolic real estate business.

Barr has turned out to be a sort of reincarnation of Roy Cohn.

In 2018, in the midst of special counsel Robert Mueller’s Trump-Russia investigation, the New York Times reported that an angry and frustrated Trump asked: “Where’s my Roy Cohn?” The president was lamenting the fact that he had yet to find any government lawyer sufficiently willing to help him lie, obstruct justice, and abuse his power in the ways that he was certain Cohn would have done if he were still alive. (Cohn was eventually disbarred; his death from AIDS in 1986 is at the heart of Tony Kushner’s play “Angels in America.”)

Since he took office, Trump has fired almost everyone who has shown any tendency to stand up to him and is now remaking his administration as a governmental version of the Trump Organization, where he only tolerates sycophants.

Two figures have clambered to the top of that pile: Mike Pompeo and William Barr. Secretary of State Pompeo, secretary of state and the only senior member of Trump’s original national security team to survive the president’s purges, has personally wrested control over all matters related to national security, intelligence, and foreign policy. He has flourished because he has been willing to do Trump’s bidding at every turn, including murder a top official of a foreign government in an airstrike. Barr, meanwhile, has gained control over the federal government’s law enforcement powers and is using them to secure Trump’s personal legal standing.

Maybe Pompeo and Barr see a path to wealth and power through a willingness to perform unethical or illegal acts at Trump’s behest. But they are no longer men of moral standing, only the avaricious lieutenants of a cult leader.

Trump fired former Attorney General Jeff Sessions in November 2018 because he dared to recuse himself from the Trump-Russia investigation, as required by Justice Department ethics rules, and allowed the Mueller investigation to proceed. When Trump nominated Barr to succeed him, few Democrats balked. They thought Barr’s previous stint as attorney general under George H.W. Bush meant that he was a mainstream conservative who would respect the rule of law.

But Barr has turned out to be a sort of reincarnation of Roy Cohn. Like Cohn, Barr seems determined to protect Trump by covering up his crimes. In the process, Barr is quickly destroying any credibility the Department of Justice ever had.

This week, Barr intervened in the Justice Department’s recommended sentencing in the case of Roger Stone, a longtime Trump acolyte who lied to Congress and intimidated a witness in connection with the Trump-Russia case. Stone was convicted in November of obstructing Congress and witness tampering, and prosecutors had recommended that he be sentenced to seven to nine years in prison.

But hours after Trump tweeted his outrage over the length of Stone’s potential sentence, calling it “a miscarriage of justice,” Barr intervened. On Tuesday afternoon, the four prosecutors who had been handling the case withdrew from it, and one of them resigned from the Justice Department in protest. The Justice Department wrote in a new filing that the previous sentence “could be considered excessive and unwarranted under the circumstances” and said it “defers to the Court as to what specific sentence is appropriate.”

Trump also withdrew the nomination to a Treasury post of the former U.S. attorney who had earlier handled the Stone case and on Wednesday launched a Twitter assault against U.S. District Judge Amy Berman Jackson, who is presiding over the Stone case. The scuffle over the Stone sentencing is just the latest example of Barr’s eagerness to politicize the Justice Department to protect Trump. Last April, Barr misled the nation about the findings of the Mueller report, purposefully downplaying how damaging it was to Trump before it had been publicly released. It was the spin job of a political hack, an act unworthy of an attorney general.

Barr has also aided and abetted Trump’s lying and scheming in the Ukraine scandal. When a whistleblower came forward to report Trump’s efforts to pressure the Ukrainian government to fraudulently investigate former Vice President Joe Biden in order to damage Biden’s presidential campaign, Barr’s Justice Department quietly decided that Trump had not broken any laws, and so there was no reason to launch an investigation of any sort. Barr kept that decision secret, and it wasn’t until news of the whistleblower’s complaint leaked to the press that the House of Representatives began to investigate and launched impeachment proceedings.

The criticism Barr took for his efforts to cover up the Ukraine scandal hasn’t stopped him from continuing to intervene in legal matters related to Trump and his loyalists — far from it. Just last month, Barr’s department reduced its sentencing recommendation in the case of Michael Flynn, Trump’s former national security adviser, who lied to the FBI about his contacts with Russian officials. Prosecutors had sought prison time for Flynn, but Barr’s department now says that probation is reasonable.

Earlier this week, Barr again intervened to help Trump’s illegal efforts to get Ukrainian officials to help him win reelection, telling reporters that he had set up an “intake process in the field” for the Justice Department to collect information on Biden from Rudy Giuliani, Trump’s personal lawyer, who is still trying to get Ukrainian officials to falsify information about the former vice president.

BARR’S INTERVENTION IN the Stone case brought the conversation about Trump’s disdain for the rule of law full circle, right back to his 2018 comment about Cohn. It was reportedly Cohn who introduced Trump to Stone, a longtime dirty trickster who got his political start working for Richard Nixon.

Now, in the wake of Trump’s impeachment and the Senate’s acquittal, the president has set off on a rampage of vengeance against the career professionals who told the truth about his illegal pressure campaign against Ukraine. Both Barr and Pompeo are standing by ready to enable Trump’s rage. Pompeo has refused to defend the career State Department officials assaulted by Trump, while Barr is supporting Trump and Giuliani’s ongoing efforts to get Ukraine to intervene in the election.

In order to stop the U.S. government from being transformed into a corrupt criminal organization, House Democrats must take the nuclear option: stop all funding to the Department of Justice until Barr resigns.

On Wednesday, Democrats on the House Judiciary Committee released a letter confirming that Barr has agreed to testify before them on March 31. The attorney general has “engaged in a pattern of conduct in legal matters relating to the President that raises significant concerns for this Committee,” the letter said. “In the past week alone, you have taken steps that raise grave questions about your leadership of the Department of Justice.” The letter referred specifically to the Flynn and Stone cases, as well as to Giuliani’s efforts to “feed the Department of Justice information, through you, about the President’s political rivals.”

But a stern letter and an oversight hearing will not be enough to stop Barr. The only thing that will make him respond will be the use of the House’s power of the purse. In order to stop the entire U.S. government from being transformed into a corrupt criminal organization by Trump and Barr, House Democrats must take the nuclear option: They must use their power to stop all funding to the Department of Justice until Barr resigns.

“Congress must act immediately to rein in our lawless Attorney General,” Sen. Elizabeth Warren said in a Twitter post on Wednesday. “[A]busing official power to protect political friends and attack opponents is common in authoritarian regimes like Putin’s Russia. Trump and Barr’s conduct has no place in our democracy.”

Shutting off funding to the Justice Department would be politically risky for Democrats. But Trump and Barr are bulldozing the norms of government and daring Democrats to do something about it. The House’s constitutional power over funding may be the only way to stop these criminals.

Risen also serves as director of First Look Media’s Press Freedom Defense Fund, which is dedicated to supporting news organizations, journalists, and whistleblowers in legal fights in which a substantial public interest, freedom of the press, or related human or civil right is at stake.

Risen was himself a target of the U.S. government’s crackdown on journalists and whistleblowers. He waged a seven-year battle, risking jail, after the Bush administration and later the Obama administration sought to force him to testify and reveal his confidential sources in a leak investigation. Risen never gave in, and the government finally backed down.