Some of the rank-and-file members of the Culinary Workers Union backed Sanders in the caucus, despite the union leaders’ opposition to Medicare for All. 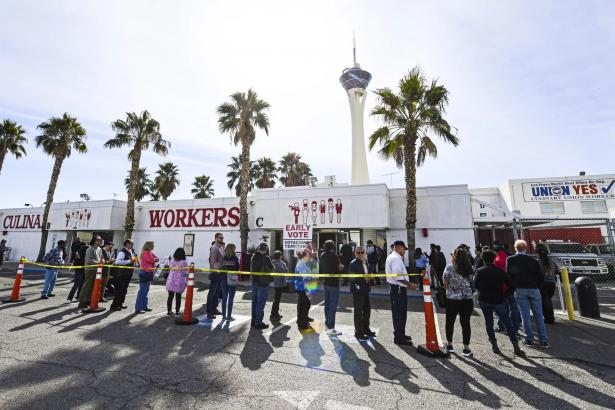 Voters line up outside the Culinary Workers Union Hall Local 226 on the first day of early voting in Las Vegas, Nevada, on February 15, 2020. , Ethan Miller/Getty Images

LAS VEGAS — Despite the leadership of Nevada’s largest union criticizing Bernie Sanders over his health care plan in the lead-up to the state's presidential caucus, the majority of union members caucusing at the Bellagio Hotel and Casino on the Las Vegas strip backed Sanders on Saturday.

Some workers who spoke to BuzzFeed News said they support Sanders’ Medicare for All proposal, even though they appreciate the union health care they have, because they have friends and relatives who don’t have union health care and worry about what would happen if they lost their jobs.

Health care is “the number one issue,” said Monica Smith, a Culinary Workers member since 1987 and an in-room dining server at the Bellagio, who caucused for Sanders.

“We have so many people that have walked that picket line, blood sweat and tears, for us. We’re going to be here to protect it, but I worry about other people that aren’t protected by unions. How do they get healthcare. What's the dollar amount that they have to go through, do they have to worry about not being able to go to a hospital?”

The results of the caucus, which was the only caucus site open to press on Saturday on Las Vegas’ hotel- and casino-lined strip specifically for workers, saw Sanders walk away with 76 supporters, followed by Joe Biden with 45 supporters, out of a total 123 caucusgoers.

Across the Las Vegas strip, the pattern of Culinary union members backing Sanders despite the conflict with leadership appeared to be repeating. In CNN’s caucus entrance poll, Sanders had the by far most support of any candidate amongst union members, with 34%.

“We’re hearing that other casinos are also kind of breaking the same way, where there was an overwhelming support for workers and the working class for the Senator,” Sanders’ political director Analilia Mejia said.

“You know, the point is, if the leader of our union, Geoconda [Argüello-Kline], can go on TV and say that whoever is elected by the Democrats they are going to support and give money and whatever to the candidate, why do they play that when on the back end you’re telling people Bernie is not good. That’s ridiculous,” said Sanders supporter and union member Jose Alvarez, referring to the union’s criticism of Sanders’ Medicare for All plan.

The union’s leadership said last week that they would not endorse any candidate in the primary, while escalating criticism of Sanders’ health care proposal. The leadership did say that they’ll support whoever the Democratic candidate is come November.

“I’m proud to be a member of the union, there’s no problem with that. They have to understand that the union is democratic, they can't decide for us what we want, that’s what I asked them. Just don't get involved,” Alvarez said.

Others said they weren’t especially paying attention to the health care issue, but decided to back Sanders because they liked his policies on college tuition, immigration, and unions.

“I have always been with the union, but I'm with Bernie and I know he’s going to be a great president. I haven’t thought about his health plan, but it doesn’t matter. I’m with him and everything he’s proposing,” said another Culinary union member, Maria Luisa, speaking in Spanish.

Mejia, who was at the Bellagio during the caucus, said she wasn’t surprised to see Culinary union members backing Sanders despite the tension of the past few weeks.

“It's not surprising because again, on the issues, the senator has been big and bold on immigration, on health care, on college for all, these are all things that have impacted the community,” she told BuzzFeed News after the caucus.

Last week, when union leadership announced they would not be endorsing any candidate, the union distributed a flyer, obtained by the Nevada Independent, advising its members that Sanders would “end Culinary Healthcare.” The document stated Elizabeth Warren's Medicare for All plan would "replace Culinary Healthcare after three-year transition or at end of collective bargaining agreements” and “lower drug prices.

Culinary union members did not vote on the endorsement question but did take surveys, Argüello-Kline, the secretary-treasurer for the union, said last week.

The union then put out a statement saying it was receiving "disappointing" attacks from Sanders supporters over their position on health care.

“The union obviously had decided to take a position, to stay out, they didn't make a formal endorsement. There were some members who seemed to be with other camps but in the end the workers voted with their feet,” Mejia said on Saturday.

The union’s 60,000 members are 54% Latinx and 15% Asian, representing workers who keep Las Vegas’s billion-dollar casino and hotel industry running. In 2016, the union said, 60% of its membership was registered to vote — including members’ families. As of 2019, according to the union, they have approximately 82,400 people registered to vote.

Mejia said that the campaign has “connected with [workers] in their communities, in their homes.”

“There’s a lot of Latino workers, there’s a lot of immigrant workers in Vegas, and we made a point to speak to them in their language in their community,” she said, referring to the Spanish language campaign events the Sanders campaign hosted, including one headed up by Rep. Alexandria Ocasio-Cortez and others lead by labor activist Jose La Luz.

Biden came in second to Sanders at the Bellagio. But the union’s non-endorsement came as a blow to the Biden campaign — which stood to gain significant support and perhaps win over more voters of color in Nevada if the union had explicitly endorsed him. Argüello-Kline called Biden "our friend" last Thursday.

Union members who supported Sanders said that while they ultimately make their own decisions, they do look to leadership and would have given any candidate a closer look if leadership had officially endorsed them.

“I checked with them walking into this building today … I was asking people as I walked by other shop stewards, people I know, come on, ‘Where am I at, where should I be when I walk in here?’ Not that I would change my mind like that, but I wanted to know what my leadership’s opinion was,” said Smith. “The last email they sent me, they said they were not endorsing. So I came here and I used my free will to stand with Bernie Sanders.”