New York City Has Done Almost Nothing to Protect 70,000 People in its Homeless Shelters from Coronavirus Spread

"These people are not socially distancing. It’s just not possible for them. Every day that it doesn’t happen, the problem gets worse.” 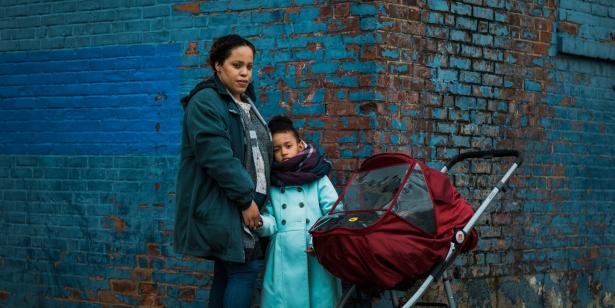 Johanna Garcia, left, her daughter, Abigail, 4, and son Logan, 10 months, pose for a portrait during their daily walk through the South Bronx. She worries about Coronavirus spread in their homeless shelter., Photo: Ryan Christopher Jones for The Intercept

JOHANNA GARCIA is doing her best to keep her family and others safe during the coronavirus pandemic. She washes her hands a lot; she cleans constantly; she goes on social distance walks with her kids, 10-month-old Logan and 4-year-old Abigail. But there’s only so much she can do while living at one of New York City’s approximately 450 homeless shelters.

Garcia, a 27-year-old former preschool teacher who now works at the community group Legal Hand, has asthma, and Logan has a respiratory condition tied to fibromyalgia, meaning they are at high risk for Covid-19, the disease caused by the novel coronavirus. Even though New York City is the epicenter of the pandemic in the United States, the shelter where they live has done little to mitigate the potential spread of the virus. The conditions, in fact, could contribute to its spread: There are no cooking facilities except for a single microwave, shared by almost 70 adults and 55 children. Each family has only one room, meaning that if a family member gets sick, quarantine — what medical experts recommend to prevent spread of the highly contagious disease — is not an option. The facility’s case managers, like countless people across the country, are working from home — leaving Garcia and others in the shelter behind.

As the number of coronavirus cases in New York City continues to rise — 75,000 as of midday Tuesday — the city’s hospitals and morgues are struggling to keep up. Along with incarcerated populations, people experiencing homelessness in the city are among those most susceptible to getting infected. In fact, as of Sunday, at least 99 people living in the city’s shelters had tested positive for the virus, the New York Times reported. In other large cities, the number remains in the single digits. The city, however, has taken little meaningful action to protect the approximately 63,000 people living in shelters or the streets, a particularly crude reality as the homelessness crisis in the city is the result of years of poor policy decisions, including by Gov. Andrew Cuomo, whose handling of the pandemic has inspired nationwide adulation.

During his three terms as governor, which have overlapped with the tenures of mayors Michael Bloomberg and Bill de Blasio, homelessness in New York City skyrocketed. The mayors and governor failed to coordinate and fund policies to stem the rise and even actively worsened it. In 2011, Cuomo, who served as the secretary of Housing and Urban Development under President Bill Clinton, pulled state funding for Advantage, a rent subsidy program, prompting Bloomberg to abruptly end it. The move sent at least 8,500 families back into shelter.

The city’s response to the particular needs of homeless populations during the pandemic has been feeble. The Department of Homeless Services website has the same generic advice as all city agencies, such as “stay home if sick.” For those forced to choose between staying at a homeless shelter or sleeping in the streets or on trains, staying “home” is not much of a choice, since the shelters make it virtually impossible to practice social distancing and quarantine.

Recently, the city has been conducting sweeps, but that’s not much of a solution either. “They move to another block or they’re likely arrested,” said Craig Hughes, a social work supervisor with the Safety Net Project at the Urban Justice Center. The Centers for Disease Control and Prevention advises that “Unless individual housing units are available, do not clear encampments during community spread of Covid-19.” 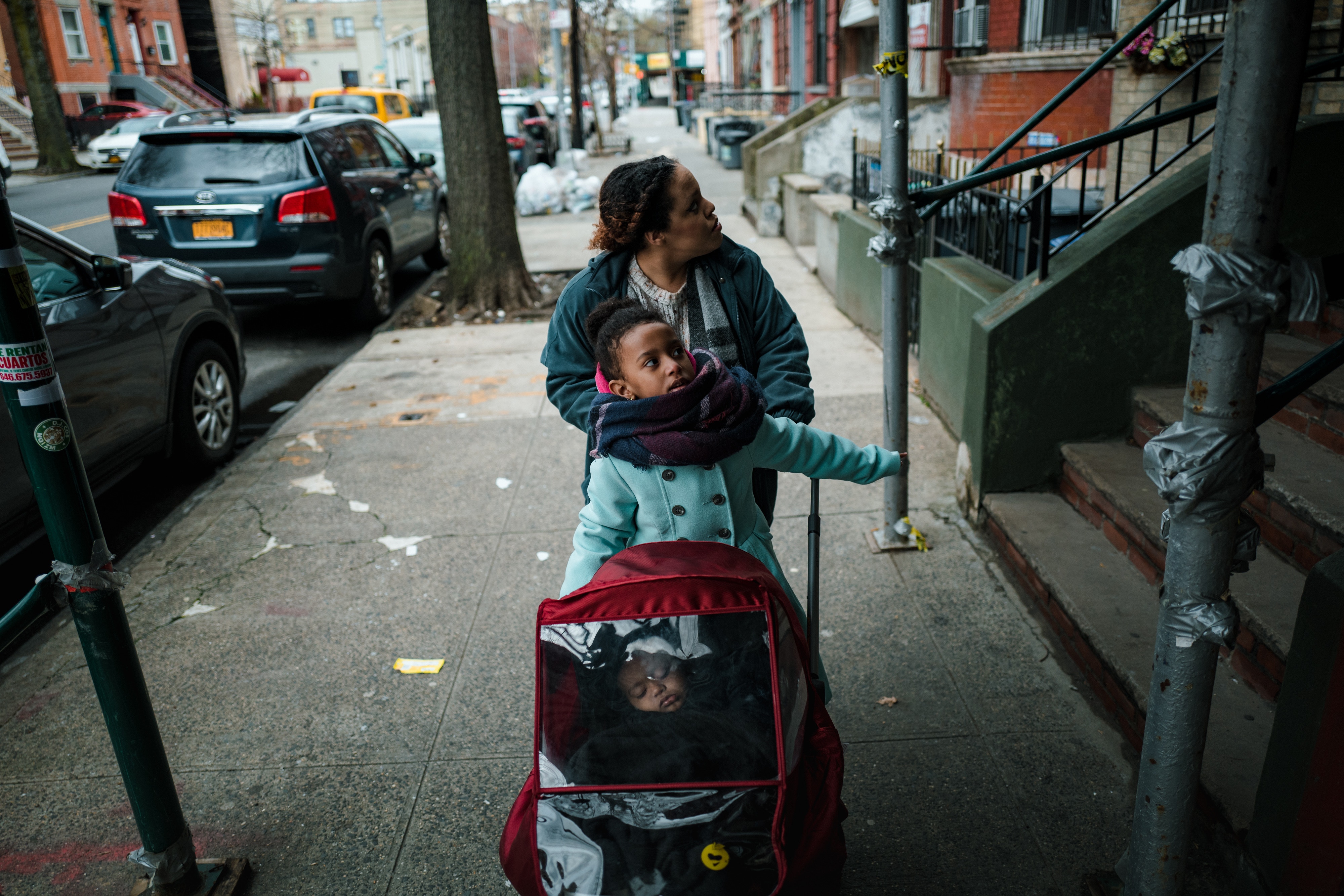 Garcia and her kids — Abigail, 4, and Logan, 10 months — on their daily walk through the South Bronx.  Photo: Ryan Christopher Jones for The Intercept

The city’s plan appears limited to securing 500 hotel rooms for people experiencing homelessness to self-isolate if they feel ill. According to a letter from the Legal Aid Society and the Coalition for the Homeless to de Blasio’s administration, there are undue burdens on sick homeless people trying to access these rooms, including denying access to Covid-19-positive or likely positive homeless single adults who haven’t had recent contact with the Department of Homeless Services. That’s resulted in adults continuing to live in aggregate shelters with people who’ve tested positive for the virus.

Joshua Goldfein, a staff attorney at the Legal Aid Society, estimates the need will be much higher than 500 rooms. “We’re going to have thousands of people who need to be isolated,” he said. (The mayor’s office, which oversees the shelters, did not respond to a request for comment.)

“Every day we don’t do it, more people will become infected. These people are not socially distancing. It’s just not possible for them. Every day that it doesn’t happen, the problem gets worse.”

With about 100,000 vacant hotel rooms in the city, there are enough empty rooms to get both street and sheltered homeless people their own rooms, said Hughes. “The shelter system should be emptied into hotels. Every single person on the street should be in a hotel room to keep them safe.” Hughes says. “The actions they’re taking shows that’s not the priority in any way for the Mayor or Governor.”

People in shelters “are essentially packed together,” Hughes said. “And that’s a recipe for humanitarian disaster.”

Victoria Wolf, who is 66 years old, knows that experience all too well. She lives in a shelter in Brooklyn housing 102 women on two floors. There are seven women in her room, while other rooms have 11-13 people in them. There are two Purell hand sanitizer dispensers for the entire facility. Some staffers at the shelter have been wearing face masks, but when Wolf asked when the women would get them, she was told “when you have a cough.”

Wolf, who is blind and ended up in the shelter after her husband left her, is worried about her health and also about how the virus will amplify tensions in the shelter. Victoria Wolf, 66, poses for a portrait near East New York, Brooklyn. Wolf is worried about her health and also about how the virus will amplify tensions in the women’s shelter where she lives.  Photo: Ryan Christopher Jones for The Intercept

“There’s fear. Emotions are volatile. There’s a lot of fighting going on consequently. You don’t trust the people taking care of you, because they lie. You already feel like you’re at the bottom of the social barrel.”

She said that a lot of the women were staying at the shelter after a stint in jail — raising the possibility of transmission between the jails, where conditions also make the risk of infection very high, and the shelters. “To treat us like the dregs of society is not nice,” Wolf said. “We all are equally important, and I wish sometimes people would see that.”

“We’re second-class citizens, on par with the prisons, no supplies [there] either.”

At another shelter, in Crown Heights, Brooklyn, 34-year-old J. W. Tokuhisa, who shares a room with another man, is worried. “I am acutely aware if anyone contracts the virus here, especially my roommate, odds are I will contract it, as well.” There hasn’t been a house meeting to address concerns. They got gloves about two weeks ago, he says, but those have since run out.

Tokuhisa, who in the past few days has developed a fever and cough, has a message for public officials. “This crisis has been a long time coming and had they not continually neglected and put off the needs of the most vulnerable New Yorkers, it would be much easier to manage,” he said. “I am reminded of the words of Malcolm X all those years ago when he mentioned, ‘Chickens coming home to roost.’”

Tana Ganeva is a reporter covering criminal justice, drug policy, immigration, and politics. She's written for the Washington Post, RollingStone.com, Glamour, Gothamist, Vice, and the Stanford Social Innovation Review. Prior to that she was deputy editor of The Influence, a web magazine about drug policy and criminal justice. For years she served as the managing editor of AlterNet.org.