labor AS AMAZON, WALMART, AND OTHERS PROFIT AMID CORONAVIRUS CRISIS, THEIR ESSENTIAL WORKERS PLAN UNPRECEDENTED STRIKE

The May Day strike is the latest in a wave of actions led by union and nonunion front-line workers. Last month, Amazon workers in New York City and more than 10,000 Instacart workers across the country staged a walkout.

May 1, 2020 Daniel A. Medina The Intercept
printer friendly 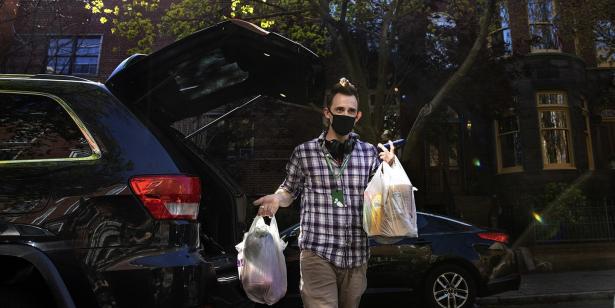 AN UNPRECEDENTED COALITION of workers from some of America’s largest companies will strike on Friday. Workers from Amazon, Instacart, Whole Foods, Walmart, Target, and FedEx are slated to walk out on work, citing what they say is their employers’ record profits at the expense of workers’ health and safety during the coronavirus pandemic.

The employees will call out sick or walk off the job during their lunch break, according to a press release set to be published by organizers on Wednesday. In some locations, rank-and-file union members will join workers outside their warehouses and storefronts to support the demonstrations.

“We are acting in conjunction with workers at Amazon, Target, Instacart and other companies for International Worker’s Day to show solidarity with other essential workers in our struggle for better protections and benefits in the pandemic,” said Daniel Steinbrook, a Whole Foods employee and strike organizer.

The labor action comes as workers and organizers say Amazon, in particular, has not been forthcoming about the number of Covid-19 cases at its more than 175 fulfillment centers globally.

Jana Jumpp, an Indiana Amazon employee, along with her small team of fellow Amazon workers, has over the last month tallied Covid-19 cases at Amazon warehouses in the U.S. According to Jumpp, there have been at least 500 coronavirus cases in at least 125 Amazon facilities.

Jumpp suspects that the number is much higher, but says this is what she and her team have been able to directly confirm through their sourcing, which includes screenshots of internal company texts and voicemails to employees when cases have arisen, in addition to messages received from Amazon workers on private Facebook groups. The numbers, which have not been previously reported, are the most comprehensive to this point.

Amazon declined to comment on the numbers of sick workers compiled by organizers. “While we respect people’s right to express themselves, we object to the irresponsible actions of labor groups in spreading misinformation and making false claims about Amazon during this unprecedented health and economic crisis,” said Amazon spokesperson Rachael Lighty. She added, “We have gone to extreme measures to understand and address this pandemic.”

The May 1 strike is the latest in a wave of actions led by union and nonunion front-line workers. Last month, Amazon workers in New York City and more than 10,000 Instacart workers across the country staged a walkout. Whole Foods employees led a national sickout on March 31, while upwards of 800 workers skipped their shifts at a Colorado meatpacking plant as coronavirus cases were confirmed among employees. Sanitation workers in Pittsburgh and bus drivers in Detroit both staged wildcat strikes.

“These workers have been exploited so shamelessly for so long by these companies while performing incredibly important but largely invisible labor,” said Stephen Brier, a labor historian and professor at the CUNY School of Labor and Urban Studies. “All of a sudden, they’re deemed essential workers in a pandemic, giving them tremendous leverage and power if they organize collectively.”

The workers coalition will unveil a set of demands. Among them are: compensation for all unpaid time off used since the beginning of the Covid-19 crisis in March; hazard pay or paid sick leave to be provided for the duration of the pandemic; protective equipment and all cleaning supplies to be provided at all times by the company; and a demand for full corporate transparency on the number of cases in facilities.

The workers chose May 1, International Workers Day, as a signal to workers everywhere that collectively, they can take on corporate behemoths, said Christian Smalls, a lead organizer of the strike. Amazon fired Smalls on March 30, only hours after he led his colleagues at a company warehouse in Staten Island, New York, on a walkout in protest of Amazon’s response to the pandemic. Amazon said Smalls was fired for violating a company-enforced quarantine.

The firing galvanized front-line workers everywhere, who sent dozens of messages daily to Smalls asking how they too could organize work stoppages to protest their workplace conditions. Smalls joined forces with workers rights groups like Amazonians United, Target Workers Unite, Whole Worker, and the Gig Workers Collective, among others.

The coalition organized the strike over the last several weeks on Zoom calls and encrypted messaging apps like Telegram and Signal. Civil rights icon Rev. Jesse Jackson joined in on one Zoom call to briefly address the organizers, offering the full support of his Rainbow Push network. “I am with you in your struggle,” Jackson told the call’s participants.

The Intercept spoke to 20 organizers from more than half a dozen states, reflecting the widespread nature of the strike. From Whole Foods workers in Boston to Instacart gig workers in Silicon Valley to Amazon warehouse organizers in Kentucky and Michigan, their stories and demands varied but together illustrated a pattern of corporate neglect toward workers now regarded as essential — alongside doctors, nurses, and EMT workers — during the coronavirus outbreak that has forced much of the nation into home lockdown.

“All of these workers are coming together and building power,” said Vanessa Bain, an Instacart worker and co-founder of the Gig Workers Collective, which counts more than 17,000 members and advocates for gig workers’ rights. “May Day is not just a one-time symbolic action, but also about building real, vast, and broad sweeping networks of power.”

The company that has faced the most sustained criticism throughout the outbreak has been Amazon, whose CEO Jeff Bezos has personally become $24 billion richer during the pandemic.

Last week, Amazon announced that it was ending its temporary policy of unlimited, unpaid time off on April 30. In response, on early Sunday morning, more than 50 Amazon workers in Minnesota walked out of a company warehouse in suburban Minneapolis to protest the move and decry their working conditions.

In March, Amazon announced plans to hire 100,000 workers to meet surging demand and to cover for workers who had taken out the unpaid leave over fears of exposure to the virus at their workplace. This month, the company announced plans for an additional 75,000 hires. For its part, Instacart hired 300,000 new shoppers in March alone — more than its entire existing workforce to that point — and last week announced that it would hire an additional 250,000 workers to meet the historic demand.

The hiring binge by Amazon and Instacart exposed the winners and losers in the pandemic, as businesses not deemed essential by the state fight mass layoffs, said Brier.

Critics say the opportunities to “cash in” on the pandemic have not come without risks. Pressured by worker protests and elected officials, companies granted some concessions to workers. Amazon, Walmart, and Target increased hourly pay by $2. Amazon now provides personal protective equipment at its facilities and more actively cleans workspaces, while Target has mandated its workers to wear masks after weeks of reports that they were reprimanded for doing so.

The Intercept reached out to all six companies targeted in Friday’s strike. FedEx and Walmart did not offer comments. Instacart said the company remained “singularly focused on the health and safety of the Instacart community.” In a statement, Target said it had taken many measures to ensure the safety of its employees and customers. Of the May Day strike, the company said, “While we take them seriously, the concerns raised are from a very small minority. The vast majority of our more than 340,000 frontline team members have expressed pride in the role they are playing in helping provide for families across the country during this time of need.”

After publication of this story, a spokesperson for Whole Foods said the company had taken measures to enhance its cleaning operations and impose policies to minimize the spread of coronavirus among its workers. “Our focus right now is ensuring the safety and wellbeing of our Team Members, which remains our top priority, while continuing to serve our customers and communities,” said the spokesperson.

A Staten Island Amazon worker, who requested anonymity for fear of retaliation from the company, has been on unpaid leave for more than a month. As someone with a number of underlying health conditions, the worker said contracting the virus would be “a death sentence.” They are surviving off meager savings and had to move into a friend’s home because they could no longer pay rent.

“They need to close down the warehouse and do a thorough, deep cleaning for it to be safe,” the worker told The Intercept. “If someone dies, they have blood on their hands.”

An Amazon worker in Detroit, who plans to call out sick on Friday, described a warehouse where, for weeks, there was no enforced social distancing and no gloves, masks, and hand sanitizer provided to workers, even as the city became a national coronavirus hot spot. Multiple colleagues confirmed the worker’s claims to The Intercept.

“You either come to work or take an unpaid leave of absence,” said the worker, who has a serious underlying health condition. “If I miss one paycheck, it would mean I lose my vehicle, I lose my place to live. I lose everything.”

A Whole Foods worker in Southern California spent weeks organizing colleagues to strike on May 1, as the number of coronavirus cases have increased at stores. The worker said that managers — even those sympathetic to their demands — are helpless against the Amazon subsidiary’s corporate office. The strike, like the sickout last month, is the only way that employees can get concessions from the company, said the worker: “Nothing happens unless they see their bottom line affected.”

Whole Worker, the group that advocates for Whole Foods workers rights, has compiled its own list of positive coronavirus cases at Whole Foods stores in a document shared with The Intercept. According to the group, there have been a total of 249 cases in at least 131 stores. (The Whole Foods spokesperson said, “Statements made by this group misrepresent the full extent of Whole Foods Market’s actions in response to this crisis and do not represent the collective voice of our more than 95,000 Team Members,” adding that the grocery giant was following guidance from authorities.)

Adam Ryan, a Target worker in southern Virginia and liaison with Target Workers Unite, said the May 1 strike is the first collective action by Target employees in the company’s nearly 60-year history.

Ryan said, “It’s up to us to fight for ourselves.”

Update: April 29, 2020
This story has been updated to include statements from Whole Foods received after publication.