May Rent Is Due, and Hundreds of Thousands of Tenants Are Going on Strike

Activists and some members of Congress are calling for rent to be canceled, as the coronavirus pandemic wreaks economic havoc

May 1, 2020 Rebecca Burns HuffPost
Printer friendly
May Rent Is Due, and Hundreds of Thousands of Tenants Are Going on Strike Published May 1, 2020 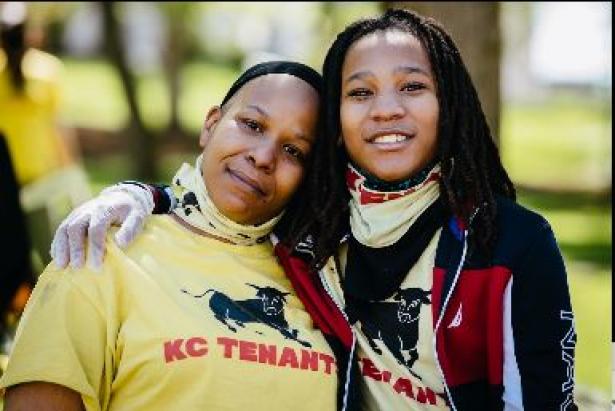 Kansas City, Missouri, resident Tiana Caldwell is on a rent strike out of necessity. An ovarian cancer survivor with congestive heart failure, Caldwell pays $300 a month in out-of-pocket medical costs. She and her husband have both been furloughed since March; they haven’t been able to get unemployment; and their stimulus checks have yet to arrive. As a result, they missed April rent for the apartment where they live with their 12-year-old son, and they won’t be able to make their $650 payment for May, either.

“When the choice is between paying your rent or being able to get your medication and feed your child, there’s no question,” Caldwell said.

There are hundreds of thousands of tenants who, like Caldwell, have said that they either can’t or won’t pay rent this month, according to a national coalition of community organizations calling itself ”We Strike Together.” Tenants who miss rent aren’t typically doing it as part of a coordinated political movement, but the campaign is trying to change that by asking people who can’t pay to sign onto a “rent strike pledge” demanding relief.

Some tenants are temporarily protected by state and local eviction freezes, though they’ll still face massive debts when emergency orders are lifted. But six states, including Missouri, have yet to take any action to freeze or limit evictions during the COVID-19 pandemic, according to a policy scorecard released by Princeton University’s Eviction Lab. Instead of a patchwork of local policies, rent strikers are clamoring for a universal solution as part of Congress’ next relief bill: Cancel payments for tenants and homeowners entirely.

A bill introduced in April by Rep. Ilhan Omar (D-Minn.) would suspend rent and mortgage payments for the duration of the crisis, with landlords and mortgage holders receiving federal assistance to cover their losses if they agree not to evict tenants without cause, among other conditions. For property owners who want out of the market, the bill would also create a fund for acquisition by nonprofits, public housing agencies, cooperatives, community land trusts and local governments.

“We must take major action to protect the health and economic security of the most vulnerable, including the millions of Americans currently at risk of housing instability and homelessness,” Omar said in a statement. “Congress has a responsibility to step in to stabilize both local communities and the housing market during this time of uncertainty and crisis.” 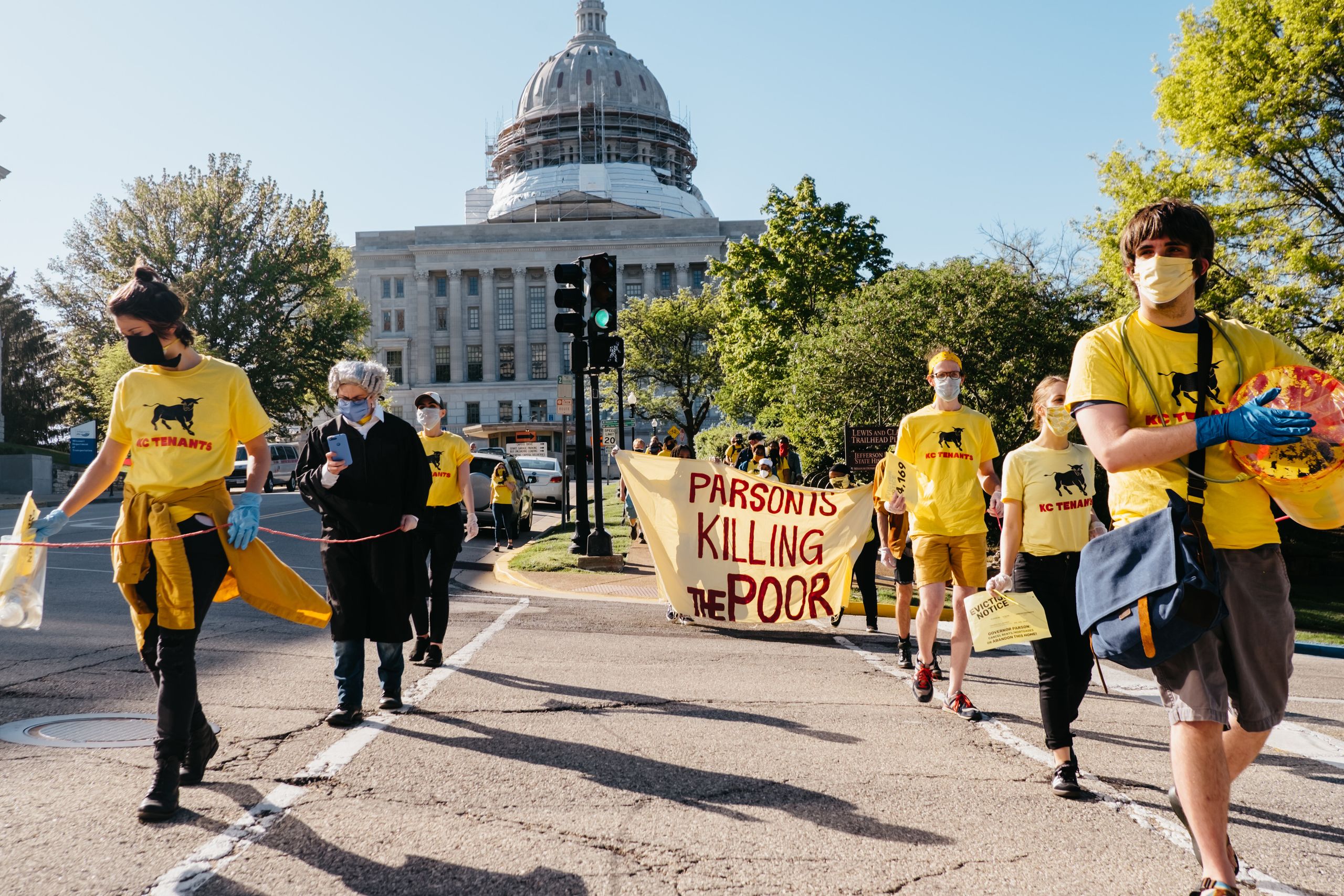 Cancel Rent protesters march from the Missouri state Capitol to the Governor’s Mansion to place an eviction notice on the front gates.

The situation for tenants is especially dire in states set to begin reopening next week.

Evictions slowed in Ohio last month as the result of extended deadlines and closed courts, even though the state did not enact a moratorium. As the state begins lifting restrictions and reopening services, renters will be at increased risk of losing their homes.

That means that Ayo Phifer’s top concern this weekend is packing her things and moving out of her Dayton, Ohio, home. She has been suffering from flare-ups of her autoimmune disorder and recently had a miscarriage, but she wants above all to avoid returning to housing court or ending up on the street.

Phifer’s landlord won an eviction judgement against her when she missed March rent, after her son was nearly killed in a shooting the month before. Just hours before the sheriff was set to arrive on March 19, Phifer won an emergency stay with the help of a legal services organization, buying her more time to remain in her home as everything around her shut down. But the Montgomery County municipal court is reopening now, and remaining in the property any longer would require Phifer to report for an in-person hearing next week.

If she can get through the move, Phifer thinks she’ll be okay. She’s back at her job as a residential assistant at a drug and alcohol rehab facility, after taking time off to care for her son and 1-year-old granddaughter. And after a stressful search, she thinks she has secured new housing for her family.

But she’s still shaken by how easy it would have been to end up homeless during a pandemic. A few weeks after the eviction judgement, her landlord, Gary Whitaker, gained notoriety on social media for a text message that went out to tenants suggesting that they “move out” if they had been laid off and couldn’t find another job. Whitaker did not respond to a request for comment, but said in a March interview with local news that his phone had been hacked.

“My landlord didn’t care if my son was shot ― those were his exact words,” said Phifer. “When things happen that we have no control over, I think there should be a little more sympathy.”

When Missouri begins lifting stay-at-home restrictions next week, Caldwell and her husband have a difficult decision to make. Her husband, a maintenance worker who makes $23 an hour, wants to return to his job to ensure that the family can pay their bills. But since Caldwell is immunocompromised, that would likely mean that the couple would have to live apart, with her husband going to stay with other family members. She’s still waiting to hear whether she’ll be officially laid off from her job at a business training company.

Wake up to the day's most important news.
Subscribe to HuffPost's Morning Email. 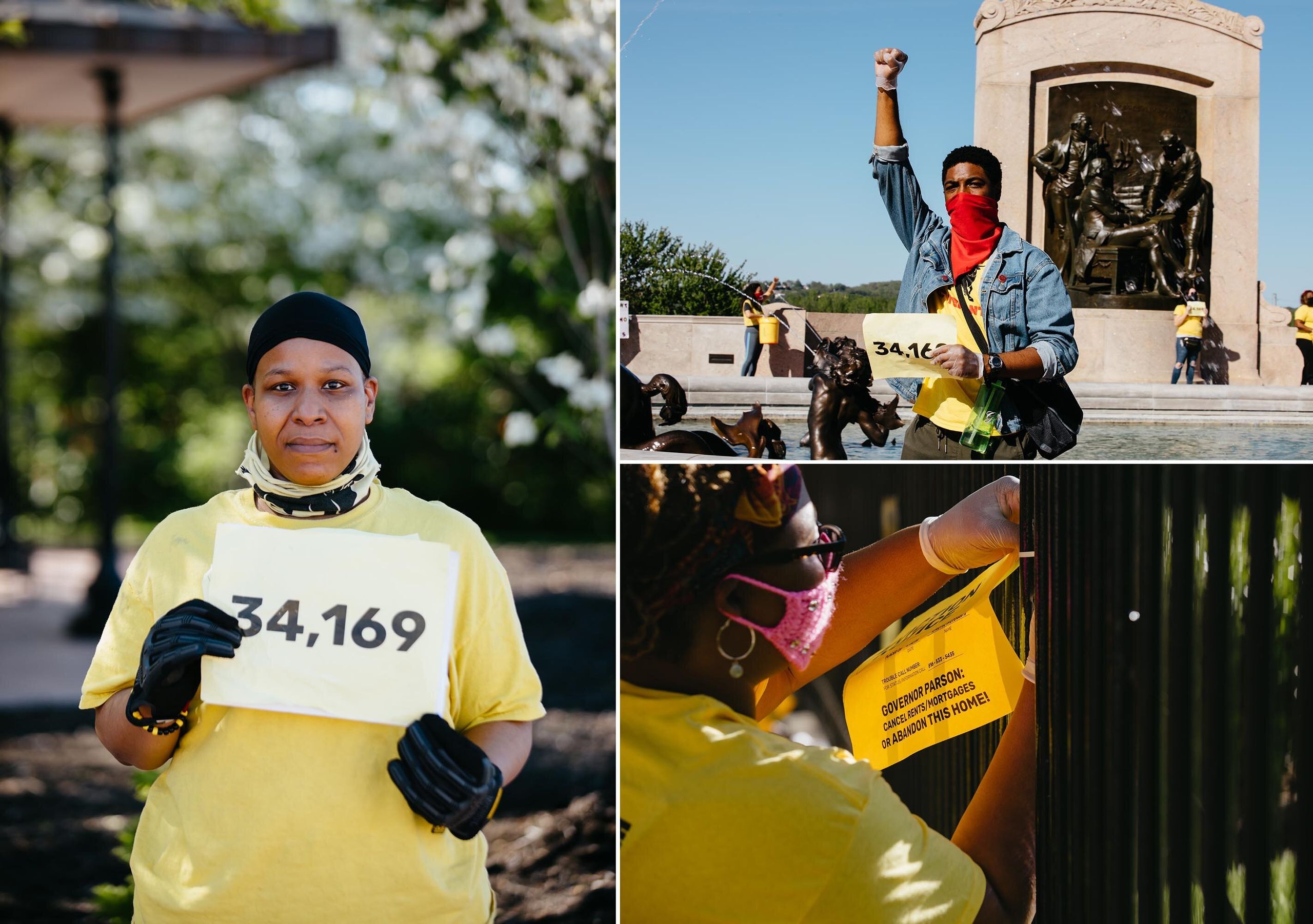 Tiana Caldwell is a tenant from Kansas City, Missouri. She is a two-time cancer survivor and an instructor at a community college. She’s been out of work for five weeks as a result of the pandemic. Her family was unable to pay rent in April and won’t make May rent, either. Her husband has an opportunity to go back to work, but he would have to live separately from the family because of Caldwell’s compromised immune system. “Either way, I’m fighting for my life,” Caldwell said, describing what it was like for her as an immunocompromised person looking for work and as an activist.

As she considers her own dilemma, Caldwell is advocating for herself and other tenants with the group KC Tenants. She joined them at a protest in Jefferson City, Missouri, on Thursday, where they marched to the governor’s mansion ― following strict social distancing guidelines ― to demand an immediate moratorium on evictions and foreclosures and the suspension of rent and mortgage payments.

Caldwell also spends her days talking to Kansas City tenants as a volunteer organizer. She said she’s heard from scores of residents who received letters from their landlords demanding payment before it came due on the first of the month. One call, from a pregnant mother of two struggling to deal with the spread of black mold in her apartment on top of eviction threats, stuck with Caldwell.

“People were already living in crisis,” she said. “This has devastated them beyond what we can imagine.”

Landlords insist they’re hurting, too. Spooked by talk of rent strikes, the president of the National Multifamily Housing Council wrote an op-ed last month urging tenants to “stop a potential housing catastrophe by committing to do their part — pay their rent — especially those who are fortunate enough to maintain employment.”

The National Apartment Association is lobbying Congress to grant property tax relief to landlords and create a rental assistance fund that would allow tenants to keep making payments. The trade group also wants to narrow the ban on evictions from federally subsidized properties — which is already going largely unenforced — that was part of the Coronavirus Aid, Relief and Economic Security Act passed in March.

Landlords are equally vocal about what they don’t want Congress to do: Cancel rent altogether. Some real estate attorneys have argued that this would represent an unconstitutional “taking” of private property under the Fifth Amendment.

John Pollock, a staff attorney for the Public Justice Center, said it’s not that simple.

“In a situation where the government is not literally taking your property away from you ― this would not eliminate rent forever ― there has to be a more nuanced analysis,” he said. “There’s a strong justification for this type of government action in an environment when we’re talking about millions of lives at stake. Being removed from your home because you can’t pay rent is literally putting your life in danger.”

Suspending rent and mortgage payments is the best way to ensure that no one falls through the cracks, said Tara Raghuveer, housing campaign director for People’s Action, which helped craft Omar’s bill.

“Rental assistance is not universal, and we’ll run into the same problem that we see with the stimulus checks ― undocumented immigrants and many others will probably be left out,” said Raghuveer. “Since the landlord is going to get relief either way, the burden should be on them to apply for it.”

Raghuveer speculated that the ongoing relief fund created through Omar’s bill might even be a better deal for property owners than short-term rental assistance payments. The National Low Income Housing Coalition estimates that the U.S. needs an investment of between $76 billion to $100 billion to keep the lowest-income households stably housed over the next year. But a one-time investment, even of that scale, isn’t the same thing as guaranteeing that all canceled rent would be covered by the federal government. Many would likely still struggle to pay, resulting in losses for landlords one way or another.

“Whether or not we call for it,” said Raghuveer, “there’s a rent strike happening.” Protesters write notes to Missouri Gov. Mike Parson in the street in front of the Governor’s Mansion in Jefferson City.