Defunding the Police Must Include Ending the Surveillance of Muslims 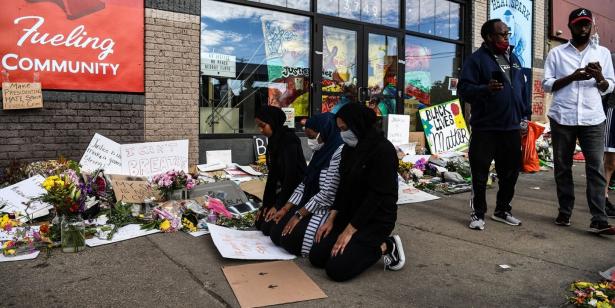 It started in Minneapolis.

The murder of George Floyd by Minneapolis police officers, the ensuing uprisings, and the work of Black women abolitionists like Mariame Kaba, Ruth Wilson Gilmore, and Angela Davis have sparked a global conversation with demands to defund the police. The movement has focused primarily on state and local governments, which spend over $100 billion on policing every year, but has also set in its sights on federal funding of law enforcement, most prominently a community policing program known as COPS. There are less direct ways the federal government helps perpetuate dangerous policing programs, among them controversial Countering Violent Extremism grant programs that unnecessarily expose immigrant, Black Muslim communities, including Minneapolis’s Somali community, to law enforcement scrutiny. To defund the police, CVE programs must also come to an end.

The U.S. Department of Homeland Security allocated a combined $20 million in 2016 and 2020 toward so-called Countering Violent Extremism programs that operate on the false assumption that Muslims are uniquely predisposed to commit violence and merit specialized government interventions. Under CVE models, First Amendment-protected activities like vocalizing opposition to U.S. foreign policy or attending a mosque are deemed “risk factors” and “indicators” of future acts of violence and are categorized as behaviors that the state must monitor. Under the guise of stopping violence, CVE programs insidiously target Muslim communities for police interactions and surveillance by local and federal law enforcement. Posing as a “community-partnership,” CVE programs have paired vulnerable Black Muslim youth with police officers, while simultaneously training police officers to pathologize dissent and criminalize mental health issues.

CVE programs have their roots in a long history of FBI investigations of Muslim communities and Black liberation movements. According to declassified FBI records, the agency piloted a “Specialized Community Outreach Team” in 2008 to make contacts with the Somali community in Minneapolis. One goal of the program was “[t]o develop a baseline profile of Somali individuals that are vulnerable to being radicalized or participating in extremist activities in order to establish a more focused outreach effort.”

This FBI outreach was a precursor to the CVE program established by the Obama administration. In 2011, DHS launched CVE pilot programs in Los Angeles, Boston, and Minneapolis, “in large part because of the strong relationships that local law enforcement has developed with the Somali community,” according to a Justice Department document, which noted that the pilot programs sought to address “violent extremist ideologies.” Despite using ostensibly neutral language, the target demographic was Muslim youth — and in Boston and Minneapolis, Somali youth in particular. In 2016, CVE was formalized as a $10 million grant program reaching 19 cities and 25 grantees. Nearly $5 million was awarded to law enforcement, emergency response, and criminal legal agencies. Some nongovernmental grantees, like Crisis Intervention of Houston and the Global Peace Center, allocated portions of their CVE funds toward the training of law enforcement.

CVE programs have their roots in a long history of FBI investigations of Muslim communities and Black liberation movements.

In its CVE grant application, Boston’s Police Foundation focused on Somali boys between the ages of 13 and 17, claiming that their “risk for violent extremism” increases due to “unaccountable times and unobserved spaces,” and that “[t]hey are enticed by their capacity to carry weapons, their loyalty, and almost gang-like dress code.” This profiling fractured local communities. Public records obtained by Boston’s Muslim Justice League revealed a Somali liaison withdrew from the program due to concerns that “focusing on efforts on one subgroup will ultimately create deeper divisions in our fractured society, doing more harm than good.” Following the implementation of CVE programming in Minneapolis and Boston, Somali youth lost trust in community spaces like mosques and community associations that accepted CVE grants and collaborated with local police.

Besides directly monitoring Black youth, CVE programs conduct briefings for law enforcement on “violent extremism.” In presentations delivered to community groups and local police departments, “Black identity extremism” is presented as an equivalent to white nationalism and white supremacist ideology. However, “Black identity extremism” is a fictive concept resurfaced and utilized by the FBI in response to the Black Lives Matter movement — a connection hearkening back to the FBI’s shameful COINTELPRO program that surveilled individuals involved in 1960s Black civil rights movements. CVE trainings recirculate the language of “Black extremism” to local police departments, allowing Black Muslim youth to be characterized as extremists twice, based on their race and also their religion. As Black youth lead demonstrations across the country against anti-Black police violence, CVE programs have trained police officers to recklessly interpret this political movement within the framework of criminality and counterterrorism.

Despite vast federal efforts and funding, researchers at the Brennan Center for Justice and Duke’s Triangle Center have concluded there is no evidence that CVE programs actually prevent violence. Additionally, civil rights and community organizations have consistently opposed CVE programs, noting in coalition letters the stigma and harm that governmental targeting causes to already marginalized communities. This year, DHS rebranded the program as Targeted Violence and Terrorism Prevention. TVTP almost entirely replicates the 2016 CVE grant program, including an additional $10 million in CVE grant funding. It separately allocates $70 million for additional federal law enforcement training, cybersecurity, and enhanced data collection. Muslim organizers are not fooled by the programs new name, and they wrote to DHS in June to again demand the program’s discontinuation.

The letter, which I wrote in conjunction with the Stop CVE Coalition, notes new and egregious privacy violations within the grant program application process. For example, any individual publicly affiliated with an organization applying to the grant program is subject to an investigation by DHS’s Office of Intelligence and Analysis. DHS’s over-broad interpretation of “affiliation” means that if a mosque were to apply for a grant, any individual who posted about their attendance at the mosque on social media has “tacitly accepted” the possibility they will be investigated; DHS’s intelligence arm could also share the results of the investigation with other DHS offices, all without notifying the subject. This distortion of security checks provides another opportunity for DHS to investigate an individual solely on account of the community spaces they frequent.

In Minneapolis, the sheriff’s department in Hennepin County, where George Floyd was murdered, received $347,600 in CVE funding in 2016. Floyd’s death was a manifestation of the brutal realities of exposing Black communities to law enforcement. Organizers demand an end to police violence against Black communities by defunding the police. These calls must include defunding federal surveillance programs like CVE.

It can end in Minneapolis.

Nabihah Maqbool is an attorney and legal fellow at Muslim Advocates, a national civil rights organization, where she investigates and litigates issues related to surveillance and racial justice. She organizes with Believers Bail Out, a community-led bail fund for Muslims.