Progressive Wave Rolls Through Texas With Big Wins in Dallas, Austin, and Houston

If Siegel and Valenzuela maintain their leads and win in November, it means a progressive message can not just win a primary in suburban New York or Chicago — as Mondaire Jones and Marie Newman showed, respectively — it can flip a red district too. 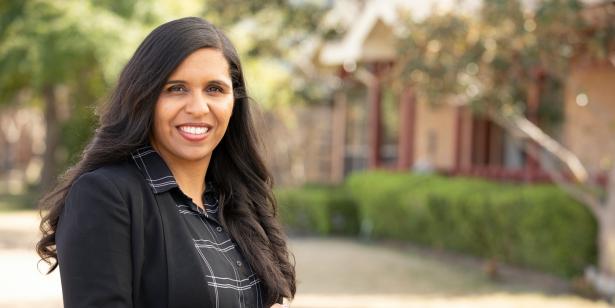 Candace Valenzuela, If elected, Candace Valenzuela would be the first Afro-Latina in Congress. As someone who grew up homeless, at one point “sleeping in a kiddie pool outside a gas station,” she would also be bringing this economic perspective to Congress.

The recent wave of progressive primary victories rolled into Texas on Tuesday evening, with Candace Valenzuela and Mike Siegel pulling into strong leads against centrist opponents for the chance to flip Republican-held suburban districts. In the Travis County district attorney race, José Garza, an immigrant rights activist and former public defender backed by the Democratic Socialists of America, ousted incumbent Margaret Moore. The Democratic national party’s pick for Senate, M.J. Hegar, meanwhile, found herself locked in a much closer fight than expected with Royce West, though by the end of the night, she appeared headed for a general election race against Republican Sen. John Cornyn.

With well more than half of the precincts reporting, Siegel was leading physician Pritesh Gandhi by 9 percentage points and declared victory around 10 p.m., Texas time. Valenzuela was up nearly 20 points over veteran Kim Olson, and also declared victory.

Computer engineer Donna Imam was leading Christine Mann, a physician who backed single-payer health care, by almost 14 percentage points in a race where the ideological lines were less clearly drawn.

Texas initially held its primary on Super Tuesday, with runoffs postponed to July due to the coronavirus. Siegel was heavily outspent and attacked as too progressive to win the general election, giving his victory more resonance, and Valenzuela mounted a major comeback after trailing Olson by 11 points in the first round of voting. Valenzuela had broad progressive backing but was also the recipient of a major spending spree by the Congressional Hispanic Caucus, looking to show it can compete in the suburbs of the new Democratic Party.

If Siegel and Valenzuela hold on to their leads, their fates in the general election could have a major impact on the politics of the House Democratic caucus next session, with 2021 potentially turning into a landmark legislative year for the party.

They join Kara Eastman in Omaha, Nebraska, and Dana Balter in Syracuse, New York, as progressives who have won contested primaries in Republican-held districts this year. That’s as many progressive wins against moderate opponents in GOP districts, many who were backed by the Democratic Congressional Campaign Committee, as there were in all of 2018, even though this year there were 40 fewer races to compete in (since Democrats flipped that many seats in 2018).

The four progressives who won their 2018 primaries were Eastman, Balter, and Katie Porter and Mike Levin in California. Eastman and Balter lost their general election races (but won their primaries again this year), making Porter and Levin the only two progressives who won competitive primaries and went on to win general elections in red districts. That created a conventional wisdom in Washington that as Democrats become an increasingly suburban party, moderate candidates will be needed to hold those seats. (And Levin’s win was difficult for progressives to capitalize on, because he beat, among other opponents, progressive Douglass Applegate, who had run a close race in 2016.)

The type of districts where Valenzuela and Siegel competed have become a focal point for a Democratic Party that has been increasingly seizing suburban territory from Republicans.

The type of districts where Valenzuela and Siegel competed have become a focal point for a Democratic Party that has been increasingly seizing suburban territory from Republicans. Siegel, running in Texas’s 10th Congressional District, which stretches from suburban Austin to suburban Houston, now faces incumbent Rep. Mike McCaul, running for an eighth term in Congress. Valenzuela, in the 24th District, which covers suburban areas outside Fort Worth and Dallas, will face Beth Van Duyne, the former mayor of Irving. The seat is currently held by Rep. Kenny Marchant, a Republican first elected in 2004, who narrowly fended off a Democratic challenger in 2018.

Marchant’s 2019 retirement announcement was part of what became known as “Texit,” as longtime suburban GOP incumbents headed for the doors. Texas’s suburbs are exploding with out-of-state transplants, many voting Democratic, which more than balances out the flow of conservatives leaving California for the Lone Star state. That changing demography has made the Texas suburbs culturally indistinguishable from suburbs around the country, and that spells trouble for Republicans.

When Democrats took control of Congress last, in 2006, they did so significantly by winning back rural districts that had been gradually becoming more Republican. Despite the wave and Barack Obama’s 2008 win, those districts continued trending away, and Republicans took many of them back in the 2010 tea party wave. This time around is different, as the suburban districts picked up by Democrats in 2018 are trending toward the party, becoming more Democratic, meaning that more progressive candidates may be able to hold them.

If Siegel and Valenzuela maintain their leads and win their general elections, it means that a progressive message can not just win a primary in suburban New York or Chicago — as Mondaire Jones and Marie Newman showed, respectively — it can flip a red district too. That would put pressure from the left on Democratic incumbents in suburban districts, many of whom have not yet established name recognition, and could be vulnerable to challenges. That dynamic could push them leftward in their voting and messaging to fend off a challenge, a shift they’d be more comfortable making if they know it won’t fatally undermine their general election chances. Porter, now a high-profile progressive, did not even draw a top-shelf Republican challenger.

The wins would be well-timed. Simply winning a handful of House races each cycle is nowhere near enough to change the structure of Congress fast enough to stave off cataclysmic climate change tipping points, to rescue the economy from a tailspin, or to address the unfolding health care crisis. But if the window for big legislative maneuvering opens in 2021, and House Democrats feel that their seats are in jeopardy if they don’t go big, the consensus within the party of what the most strategic move is could shift left.

SIEGEL, A CIVIL rights attorney who supports a Green New Deal and Medicare for All, first ran in 2018, when Democrats considered the district out of range, but surprised officials back in Washington by winning 47 percent of the vote. That blood in the water drew new candidates, notably corporate attorney Shannon Hutcheson, who was backed by EMILY’s List and was clearly the establishment favorite, even though she did not have the official backing of the DCCC.

But a super PAC backing Gandhi, 314 Action, spent heavily pounding away at Hutcheson, and she failed to make the runoff. The super PAC has continued to spend big — dropping close to $600,000 on the race — in the runoff. The PAC presents itself as pro-science, but endorsed John Hickenlooper, a champion of fracking, in Colorado, and Gandhi has called the Green New Deal and Medicare for All “fool’s gold.” 314’s main line of attack against Siegel is that his loss last cycle proves he is unable to win the general election. Ironically, of course, it was his surprisingly narrow defeat that coaxed Gandhi and Hutcheson into the race. The parallels with Levin’s 2018 race are notable, as Applegate, like Siegel, helped make the district competitive the cycle prior, and 314 Action helped power Levin over Applegate.

Sen. Kamala Harris had endorsed Gandhi, while Siegel had the backing of Sens. Bernie Sanders and Elizabeth Warren, as well as Sunrise Movement and the Texas AFL-CIO, an unusual combination. Sunrise made Siegel’s race a high priority, and his outspoken civil rights record was a boon throughout June, as protests erupted after the murder of George Floyd by Minneapolis police officers.

In his victory speech Tuesday night, Siegel noted that the district is more than just a stretch of suburbs, zeroing in on the closure of three rural hospitals in the district over the past 10 years. “We are in a district where the legacy of Jim Crow racism hangs heavy,” he said, noting the recent five-year anniversary of the death of Sandra Bland in the district.

The wave of protests also helped Valenzuela, who surged significantly following the March 3 primary. Last week, a survey, which was commissioned by the Congressional Hispanic Caucus and conducted in July by Data for Progress, revealed a significant shift in the race, showing that Valenzuela was climbing, leading Olson by an 11-point margin. Early voting data from her campaign suggests that the surge was fueled by higher turnout among voters of color. If elected, Valenzuela would be the first Afro-Latina in Congress. And as someone who grew up homeless, at one point “sleeping in a kiddie pool outside a gas station,” Valenzuela would also be bringing this economic perspective to Congress, where many of the lawmakers are millionaires. She noted in her victory speech that, thanks to a newborn and another young child, “the majority of our campaign was run out of our master bathroom.”

Leading up to the March primary, Olson led the rest of the field in fundraising and as a retired Air Force colonel, fit the mold of the party’s preferred candidate. But her record, specifically that Olson was charged with war profiteering in Iraq, had the potential to be too big of a political liability in the general election, so the House Democrats’ campaign arm stayed out of the race. EMILY’s List, which doesn’t typically weigh in on races between two pro-choice women, backed Valenzuela.

Valenzuela also won endorsements from the Congressional Hispanic, Black, Asian, and Progressive Caucuses, and lawmakers like Warren and Rep. John Lewis, D-Ga. In the most recent fundraising quarter, The Intercept reported last week, Valenzuela outraised Olson, $465,000 to $438,000, with a smaller average campaign contribution.

Garza, executive director of the Workers Defense Project, ran on a progressive platform that focused on transforming the criminal justice system to decriminalize poverty. He was endorsed by Sanders, Warren, Julián and Joaquin Castro, the Austin DSA chapter, the Center for Popular Democracy Action, and the Working Families Party. One of the major highlights of Garza’s platform was a vow to treat substance abuse as a public health crisis and end the prosecution of low-level drug offenses, which he defined as the sale and possession of a gram or less of narcotics.

[Ryan Grim is The Intercept’s D.C. Bureau Chief. He was previously the Washington bureau chief for HuffPost, where he led a team that was twice a finalist for the Pulitzer Prize, and won once. He edited and contributed reporting to groundbreaking investigative project on heroin treatment that not only changed federal and state laws, but shifted the culture of the recovery industry. The story, by Jason Cherkis, was a Pulitzer finalist and won a Polk Award. He has been a staff reporter for Politico and the Washington City Paper and is a former contributor to MSNBC.

Aída Chávez is a journalist based in Washington, D.C., covering Congress and the impact of public policy on diverse communities. Prior to joining The Intercept, she worked for The Hill and Cronkite News – Arizona PBS. She graduated from Arizona State University in 2017 with a B.A. in journalism and political science.] 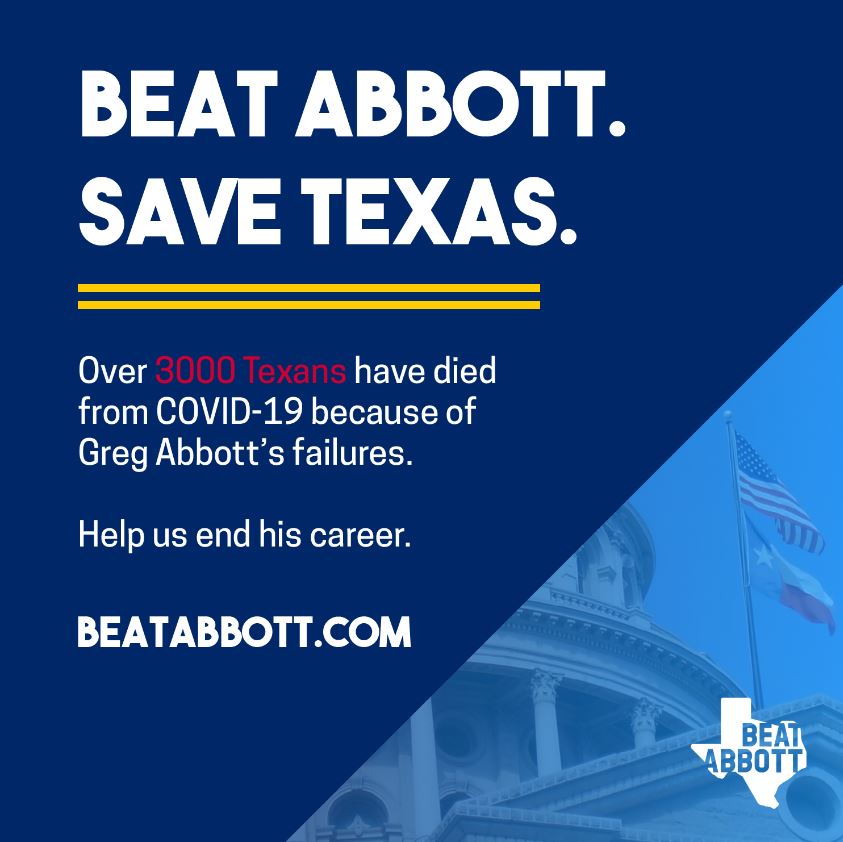 For more information, if you live in Texas (or don't and want to help);

The group, the Beat Abbott PAC, will raise money that will benefit the eventual Democratic nominee against Abbott in 2022.