What Scientists Know About How Children Spread COVID-19

As communities struggle with the decision over whether to open up schools, the research so far offers unsatisfying answers 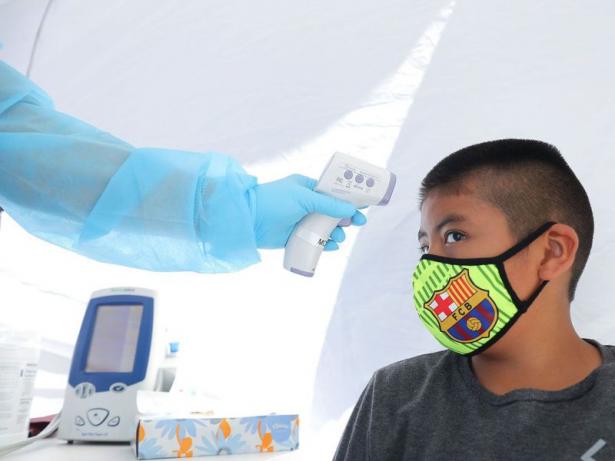 A boy has his temperature checked as he receives a free COVID-19 test in Los Angeles, Mario Tama/Getty Images

Every year, children are a major driver of transmission for the viruses that cause the flu and the common cold. So this March, when the COVID-19 pandemic hit the United States, Tina Hartert of the Vanderbilt School of Medicine expected the same to be true for the novel coronavirus, SARS-CoV-2. But months later, Hartert and other respiratory disease experts are still trying to pin down the elusive virus, which has surrendered only hints about its effects on children and their ability to spread the infection.

What has become clear is that children, especially younger children, do not get nearly as ill as adults, especially older people, and rarely die from COVID-19. For example, a meta-analysis of existing studies in Pediatric Pulmonology looked at 550 cases among children under 18 in China, Italy, and Spain; it found only nine children had a severe or critical case of COVID and only one, who had underlying conditions, died.

Still, the question of how likely kids are to be vessels ferrying the infection to others remains a looming concern as school districts and states across the U.S. consider whether and how to reopen for the fall. “It's obviously one of the critical questions that we have to answer,” Hartert says. “We still don't have a lot of data.”

Hartert now leads a six-month study funded by the National Institutes for Health that looks to answer that question, among others. Called the Human Epidemiology and Response to SARS study (HEROS), it will sample 1,951 families every two weeks starting July 1. The families live mostly in urban areas like Chicago, New York and Denver, but the study also includes some from rural Wisconsin. The goal is to capture infections as they occur and track the transmissions patterns. “One of the problems with a lot of the studies that have been done is you really don't know who's infected and then who transmitted it to whom,” she says.

The first samples are being analyzed now. How informative the data set becomes depends on the subjects—whether it includes clusters of families who are infected and shows how the virus spreads. “It's a difficult thing to predict,” she says.

Elsewhere, researchers have teased out evolving and sometimes contrary answers to basic questions about COVID and kids, with only enough pieces fitting together to suggest the outlines of an image.

For one study, published in May, researchers analyzed reports from more than 600 people from two cities in China: Wuhan, the epicenter of the outbreak, and Shanghai. In this relatively small sample size, they found children were a little more than a third as likely to be infected as adults. But children had roughly three times as many chances to become infected when schools were open, effectively canceling the difference.

Another recent study by the London School of Hygiene & Tropical Medicine, which used data from China, Italy, Japan, Singapore, Canada and South Korea, found that people under 20 were about half as likely as adults to be infected. But the researchers qualified their findings, noting that there were variations among countries and age groups. Recent data in England, they noted, found little difference in infection rates among children and adults. Nicholas G. Davies, an epidemiologist and modeler who led the study, said what happens with kids and COVID remained a mystery.

The fact that children are less likely to exhibit symptoms while infected makes the problem of determining how well they spread the coronavirus even trickier to figure out. But emerging studies and the history of the common coronaviruses being transmitted by children makes for a compelling case they can spread the COVID-19 virus.

A recent study from South Korea of 5,706 infected people and their 59,073 contacts found children under 10 transmitted less often to adults while those between the ages of 10 and 19 spread the virus as well as adults do. Households with the older children had the highest rate of spread to other members—18.6 percent— of any age group while households with younger children had the least spread, just 5.3 percent. The overall average was 11.8 percent.

There’s evidence as well that children, including those without symptoms, are as likely to be infectious. Researchers in Berlin tested more than 3,700 COVID-19 patients, including 127 individuals under 20 years old. The study found that compared to adults, kids carried the same viral load, a signal of infectiousness.

Some reports place children at the center of spreader events. In Israel, the number of new cases has risen from fewer than 50 per day two months ago, before schools reopened, to more than 1,500 per day now. Those numbers followed school outbreaks that infected at least 1,335 students and 691 staff. An overnight camp for 13-to-18-year-olds in Missouri closed after 82 children and staff became infected.

Yang Yang, a biostatistician at the University of Florida’s College of Public Health, is completing a study based on nearly 20,000 households. He says his preliminary results reveal that children do infect adults, especially in the same households. “Our analysis is that children are a little bit more infectious than adults with in-house transmission,” he says, but that may just be because they are tended to by parents or grandparents in homes.

Jeffrey Shaman, an infectious disease expert at Columbia University's Mailman School of Public Health who has been a leading COVID-19 researcher, says it’s impossible to get a clear picture of the effects of COVID on kids right now. Shaman and his team spent two years running the Virome of Manhattan, a surveillance project similar to HEROS, which tracked infections and transmission of flu, cold viruses and the coronaviruses that cause the common cold. They found viruses moving from schools and daycare facilities, from children to parents, something any parent who sends their children to daycare or pre-kindergarten for the first time recognizes. However, the studies to date about COVID-19 and children have been too small or too compromised by factors such as school closings, lack of testing or much smaller community caseloads than the United States.

“The question is, what happens when the children get it? Are they effectively dead ends?” he says. “Or are they capable of communicating the virus and spreading it to other people? And I think the evidence is not conclusive. We don't know enough to know that children to some degree are less capable of transmitting this virus.”

Derek Cummings, an emerging pathogens expert at the University of Florida, says he’s not convinced by the evidence that children are less likely to transmit the disease. His work with the endemic coronaviruses, relatives of SARS-CoV-2, shows that children are infected with their first coronavirus by three and get all four of the common coronaviruses by 20. “Every other coronavirus infects kids and transmits among kids,” he adds, “so why would we assume this one doesn't?”

Hartert says that the research indicating children may not as often transmit the virus would, once again, make SARS-CoV-2 an outlier. She noted that studies show children are shedding a similar amount of COVID-19 virus as adults, which would suggest they were equally capable of transmittal. “So there are a lot of things that would make it surprising if we find out that children are less likely to transmit the virus,” she adds.

Shaman says he understands the need to get children back to school, but it's hard to gauge the risk given the current state of knowledge and information slanted by governments looking to reopen schools. “We don't have a policy model and an experience model that allows us to understand what will be appropriate,” he adds. “We're dealing with a novel coronavirus. We don't fully understand how children are involved in the transmission cycle.”

Hartert, a former high school teacher, said that schools need to reopen for a number of reasons, including mitigating the inequities of staying at home for low-income students who need support for things like meals and after-school care. But in her opinion, reopening should only happen in states and communities where the virus is under control. (Other countries have reopened their schools, but only after the virus had been subdued and often with limited class sizes.)

“There aren't many other countries that have opened schools while rates of the virus are increasing exponentially,” she says. “If you live in a region where there's more spread of the virus, it's a lot more likely that you have an outbreak from a teacher, parent, or child who brings the virus to school.”

Mitigation strategies like masks, social distancing and ventilation need to be in place as well. “We're going to have to weigh the risks and benefits with the amount of data that we have at the point which we have to make decisions about opening schools,” she says. “We've got to get our kids back to school and we've got to open daycares for essential workers. I think everyone wants to do that. But it's not as easy as just mandating that it happen.

Jim Morrison is a freelance writer whose stories, reported from two dozen countries, have appeared in numerous publications including Smithsonian.com, the New York Times, and National Wildlife.