'The US Is Nowhere': As The Political Crisis In Belarus Deepens, America Is Conspicuously Absent

Crackdowns and demonstrations continue to roil Belarus after a contested election, but the US seems reluctant to play a role in the push for an autocratic leader to share power and scale back police abuse. 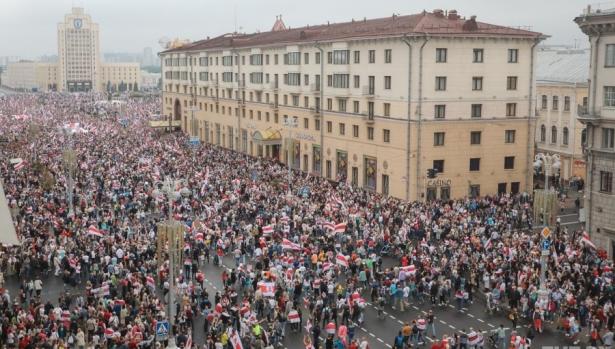 At least 250,000 people attended the The March Of New Belarus demonstration in Minsk, bigger than the crowd that demonstrated for Belarus' independence in 1991, intellinews.com

KYIV — As the political crisis roiling Belarus deepened this week with the arrest of two prominent protest leaders and a call for a Nobel laureate to come in for questioning, a top US diplomat met with the self-exiled Belarusian opposition leader in Vilnius, Lithuania.

The meeting between Deputy Secretary of State Stephen Biegun and presidential candidate Svetlana Tikhanovskaya came hours after more than 100,000 demonstrators in Minsk defied the threat of a military crackdown and demanded the ouster of authoritarian leader Alexander Lukashenko.

On Sunday, Lukashenko, the mustachioed president who has ruled Belarus for the past 26 years, strode out of a helicopter after the crowd had dispersed wearing a bulletproof vest and carrying a rifle that was missing a magazine.

Flanked by an armed entourage that included his 15-year-old son in full body armor and clumsily lugging his own rifle, the president thanked riot police who in recent weeks have terrorized peaceful protesters, detained more than 7,000 of them, and savagely beaten hundreds across the country. “They scattered like rats,” he said of protesters.

The scene, captured by the president’s press service, looked like something out of a straight-to-video action movie, but its message was clear: Lukashenko, who claimed victory in the Aug. 9 presidential election despite evidence that the vote was heavily rigged in his favor, has no intention of leaving office without a fight.

And what has the US message been? So far, despite the meeting with Tikhanovskaya, muddled and muted. 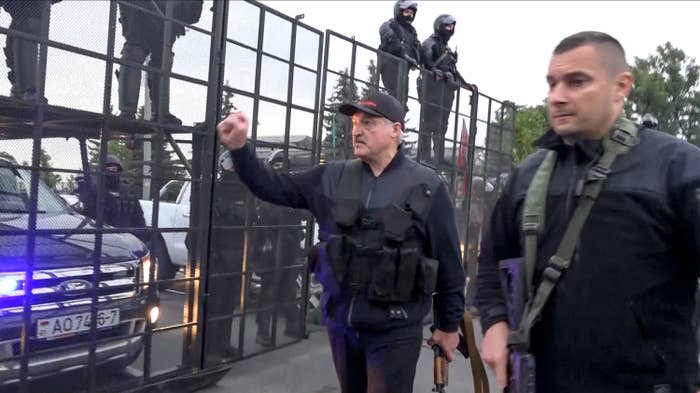 If some viewed Biegun’s appearance in Lithuania on Monday as a sign of a greater US role in trying to solve the deepening political crisis in Belarus, they would be mistaken, experts said.

“The EU is playing the lead role as far as the Western response. The US is nowhere,” Nigel Gould-Davies, a senior fellow for Russia and Eurasia at the International Institute for Strategic Studies (IISS) who served as the British ambassador to Belarus from 2007 to 2009, told BuzzFeed News.

Last week, EU officials said the bloc would not recognize the results of the Belarusian election, calling it fraudulent. Charles Michel, the president of the European Council, also promised to sanction individuals responsible for the violent crackdown by security forces that has followed. Lithuania has gone so far as to refer to Lukashenko as the “former president” and led an effort for the EU to recognize Tikhanovskaya as the country’s newly elected leader. 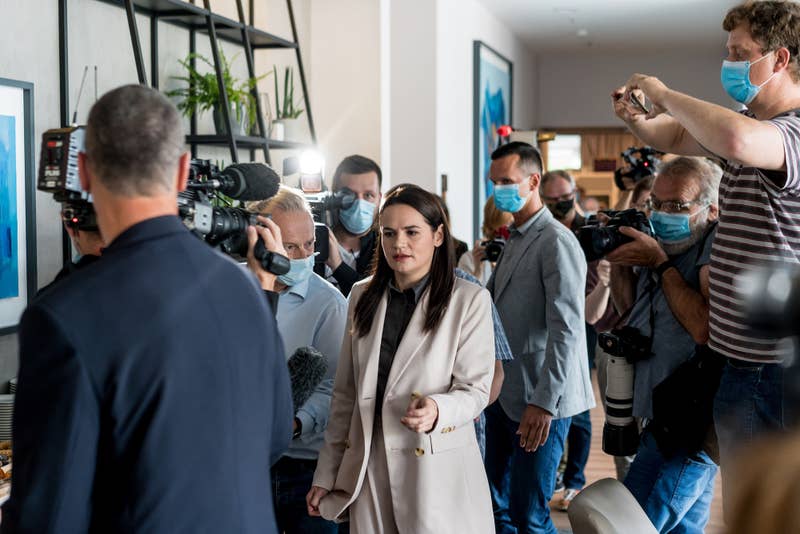 That contrasts sharply with the US response, Gould-Davies said. “There’s no clarity and focus coming from the top on Belarus,” he said, referring to the White House.

Gould-Davies said he believes that could be due in part to the current political climate in Washington. “The US has taken strong positions [on Belarus] in the past, but there is turmoil and confusion in preelection America,” he said.

It’s also possible, Gould-Davies said, that Belarus’s problems are not that compelling to the president. “This is a White House that’s never spoken about human rights at all,” he said.

Trump has not personally expressed support for the Belarusians protesting across the country. Responding to a question during a press gathering at the White House last week, he said only that his administration was watching the “terrible situation” closely.

“Severe restrictions on ballot access for candidates, prohibition of local independent observers at polling stations, intimidation of opposition candidates, and the detention of peaceful protesters and journalists have marred the process, and we urge the Belarusian government to respect the right to peaceably assemble and to refrain from use of force,” she said.

Secretary of State Mike Pompeo made similar statements to the press in recent weeks. But the State Department and the White House have not gone as far as some Democrats and Republicans would like to see.

Last week, former national security adviser John Bolton tweeted that the president should come out in support of Tikhanovskaya and that US support was key to resolving the crisis. He also noted that doing so would send a strong message to Russia, where Lukashenko has turned for support as protests against him have grown.

“President Trump should voice strong US support for the Belarus opposition movement. The moment for freedom in Belarus is here and it will take our leadership to make it happen. Russian influence must be checked with American strength and resolve,” Bolton tweeted.

There are some inside the State Department who agree with Bolton’s sentiment and have looked on in frustration as the US largely ignores events Belarus.

According to a senior State Department official whose portfolio includes Belarus, Washington’s tepid response has been met with disappointment by many diplomats focused on the Eastern European region. Speaking to BuzzFeed News on the condition of anonymity to discuss sensitive matters, the official said some of them want Pompeo and Trump to make stronger statements against Lukashenko and in support of Tikhanovskaya and peaceful demonstrators, especially in the aftermath of horrific accounts of police abuse. 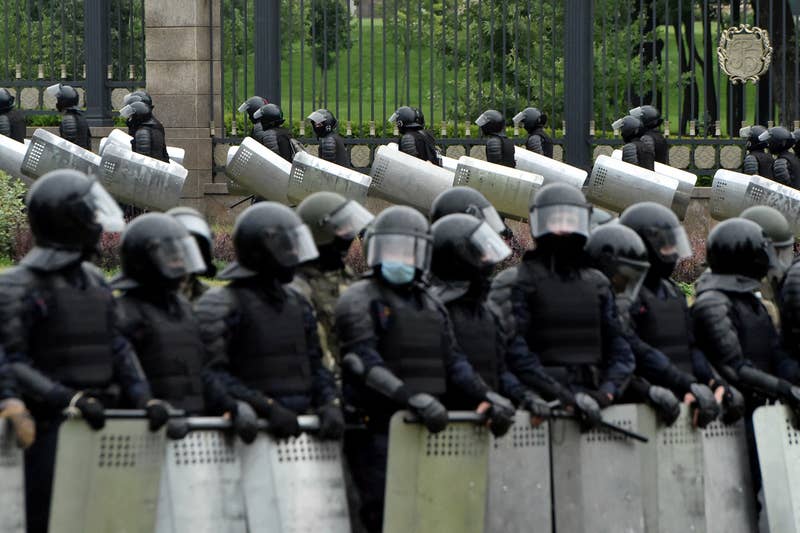 Some want the State Department to coordinate sanctions against Lukashenko and his top lieutenants with the EU, the official added.

It is unclear whether the US is considering sanctions. The State Department did not respond to several requests for comment.

A month ago, the US was gearing up to reengage with Belarus and was even poised to confirm its first ambassador to Minsk since 2008, when diplomatic relations were curtailed after Washington imposed sanctions over worsening human rights abuses.

Julie Fisher, a career diplomat with extensive experience in European affairs and the respect of both Democrats and Republicans, was nominated by Trump earlier this year and has already faced questioning from members of the Senate Foreign Relations Committee.

But Fisher’s confirmation is now uncertain. And one top lawmaker, Democratic Sen. Chris Murphy, has gone so far as to threaten to block it to send a message to Lukashenko.

“While I support greater ties between the United States and the Belarusian people, now is not the time to be elevating the diplomatic relationship with Lukashenko’s government,” Murphy said in a statement.

“Sending an Ambassador to Minsk now, for the first time in over a decade, would signal that the United States condones these actions, and I am prepared to oppose the nomination in the Foreign Relations Committee unless it is withdrawn by the President.”

Andrew Weiss, vice president for studies at the Carnegie Endowment who previously served as director for Russian, Ukrainian, and Eurasian Affairs on the National Security Council staff during the administrations of presidents Bill Clinton and George Bush, told BuzzFeed News he thinks that is the right approach.

“On one hand, you want to stand up for what’s right and stand up for protesters and against what Lukashenko’s regime is doing to them,” he said. “At the same time, there are not a lot of tools in the West to force what we want to see, which is Lukashenko leaving power. Telling him he’s lost the confidence of Belarusian people probably isn’t going to be enough to get him to step down.”

But if Biegun’s words are any indication, the US is not prepared to do that, anyway.

“The purpose of the meeting [with Tikhanovskaya] was to listen, to hear what the thinking is of the Belarusian people, and to see what they are doing to obtain the right to self-determination,” Biegun was quoted as saying by the AFP news agency. “The United States cannot and will not decide the course of events in Belarus. This is the right of the Belarusian people.”

As Biegun spoke with Tikhanovskaya in Vilnius, Lukashenko stepped up his crackdown on protest leaders in Minsk. Reuters reported that Olga Kovalkova and Sergei Dylevsky, two members of the coordination council, a body set up to facilitate the peaceful transition of power from Lukashenko to challenger Tikhanovskaya, had been detained near a factory entrance where workers were striking.

Separately, Belarusian Nobel laureate author Svetlana Alexievich reportedly has been called in for questioning by investigators in a criminal case against the council.

Authorities have tried various tactics to discourage protesters. Besides arresting key figures involved in the opposition movement, the state has brought the military into Minsk, deployed thousands of riot police, threatened employees at state companies that they may be fired for striking, and sent masked security officers to film the faces of demonstrators. 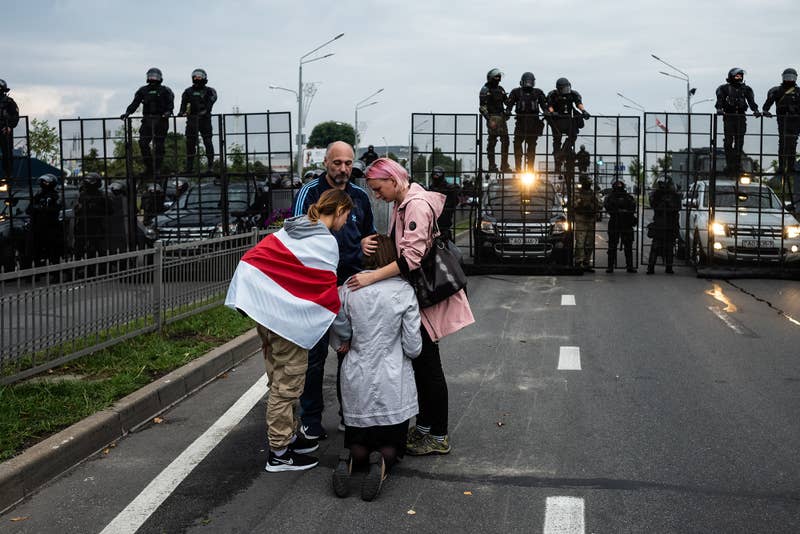 On Tuesday, Belarusian and international human rights groups appealed to the United Nations to intervene after collecting more than 450 testimonials of torture and inhumane treatment in this month’s crackdown, according to the Viasna human rights group.

Belarusians have shown resolve in the face of Lukashenko’s brutality and have signaled that, like him, they are unwilling to back down.

Aliaksandr Herasimenka, a native Belarusian and researcher at Oxford focused on social movements and authoritarian regimes, told BuzzFeed News that the protest movement marks a “political awakening” after years of repression and bending to the will of Lukashenko.

He said large-scale demonstrations are likely to continue — with or without US support. In fact, many feel it isn’t needed.

“We are emerging from a post-Soviet haze,” he said. “It is not about the West or the East. ... Belarusians are thinking about themselves and their country.”

And she said protesters would not back down to Lukashenko’s threats of another crackdown.

“The intimidation didn’t work. We will not relent,” she said. “We demand to respect our basic rights. We demand all political prisoners be free.”