Hunger in America, Especially for Children, Has “Skyrocketed” During Pandemic

Estimates say hunger in US households has tripled since 2019, and about 5 million school age children sometimes or often went hungry in 2020. This increase has nothing to do with a shortage of food. It is purely the result of political decisions. 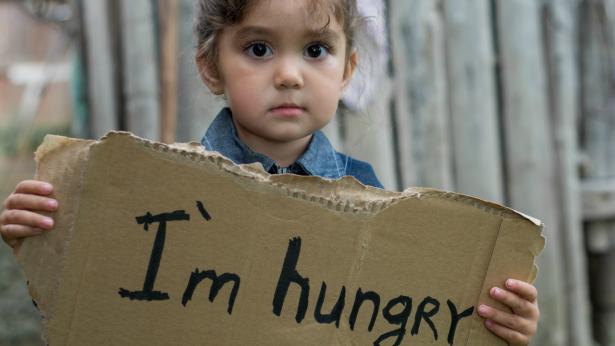 The share of US children who sometimes do not have enough to eat is 14 times higher than last year. Congress need only maintain or greatly expand existing federal programs to end children’s food insecurity., Discha-AS/Shutterstock

THE LEVEL OF hunger in U.S. households almost tripled between 2019 and August of this year, according to an analysis of new data from the Census Bureau and the Department of Agriculture. Even more alarming, the proportion of American children who sometimes do not have enough to eat is now as much as 14 times higher than it was last year.

The Agriculture Department conducts yearly studies on food insecurity in the U.S., with its report on 2019 released this month. The Census Bureau began frequent household surveys in April in response to Covid-19 that include questions about hunger.

The analysis, by the Washington, D.C.-based Center on Budget and Policy Priorities, found that 3.7 percent of U.S. households reported they sometimes or often had “not enough to eat” during 2019. Meanwhile, the most recent Census data from the end of August of this year showed that 10 percent of households said they sometimes or often did not have enough to eat within the past seven days. Levels of food insecurity in Black and Latino households are significantly higher, at 19 percent and 17 percent, respectively, compared to 7 percent in white households.

Even worse, while about 1 percent of adults with children said their children sometimes or often went hungry in 2019, between 9 and 14 percent of such adults said the same about their kids in August 2020. CBPP estimates that this adds up to about 5 million school-aged children in such households.

“What I see every day from the pandemic is amazingly-increased numbers of severely underweight children coming to our clinic, and parents really panicked about how they’re going to find enough food,” says Dr. Megan Sandel, an associate professor of pediatrics at Boston University School of Medicine.

According to CBPP, the USDA and Census numbers are not an exact apples-to-apples comparison due to some differences in how the surveys are conducted. But it’s clear, states CBPP’s Brynne Keith-Jennings, that the number of Americans “struggling to put food on the table has skyrocketed compared to before Covid-19.”

The increase in hunger among children is particularly disturbing, for several reasons. Generally, explains Dottie Rosenbaum, another CBPP expert, “parents shield their children.” Sandel says that “parents are reporting to me sometimes at mealtime going back into the kitchen so the kids don’t notice that they are not eating themselves.” So when children are going hungry, there is little food for anyone.

The numbers represent a failure of the federal government’s food programs. The Supplemental Nutrition Assistance Program — i.e., food stamps — is available to Americans of all ages. But the smaller Special Supplemental Nutrition Program for Women, Infants, and Children — better known as WIC — and the National School Lunch Program are largely aimed specifically at preventing child hunger. Congress also created a temporary program called Pandemic-EBT in March to replace school lunches for children learning from home.

Unsurprisingly, going without regular food creates significant health problems for children. Studies have found that children in food insecure households suffer increased rates of anemia, asthma, long-term neurological damage, and many other ailments. “When you think about what the first few years of life are like,” Sandel points out, “that’s when you’re growing the brain you need for the rest of your life. This pandemic is really going to affect a generation of kids.” It is also a basic fact of school that hungry children cannot concentrate, and inevitably will fall behind their classmates.

The new government data matches anecdotal evidence from across the U.S. “Over my career I have met many desperately poor people,” says Sherrie Tussler, who’s run Hunger Task Force, a Milwaukee-area food bank, for 23 years. “But I have never seen any circumstances as bizarre and complicated as we’re seeing right now.” From large cities to modest towns, private food banks report being overwhelmed. Thousands line up in their cars in Texas to get food. There has been a 600 percent increase in demand at a South Florida food bank. In New York City, the number of people being served by one emergency food pantry went from 3,715 in February to over 18,000.

REMARKABLY, THIS INCREASE in hunger has nothing to do with any actual shortage of food. It is purely the result of political decisions.

According to the Agriculture Department, in recent years 31 percent of the U.S. food supply at the retail and consumer level has been thrown away in one way or another. This translates to 133 billion pounds of food with a value of $161 billion. This is almost twice as much as the federal government spends on all its food programs combined.

Even the Covid-19 shutdowns have not created any meaningful shortages in U.S. food availability. Food prices overall have increased 4.1 percent over the past year. But this modest uptick took place largely in the first months of the pandemic. Prices only went up by 0.1 percent in August, and actually fell in July.

Moreover, it’s a problem that does not have to be solved from scratch. It simply requires Congress to greatly expand or simply maintain the programs that already exist.

SNAP, unlike many aspects of the U.S. government, has not been hollowed out and functions well. Millions of people were added to the program after the pandemic began, with few hiccups: The technology worked, and they quickly got food stamps. The issue with SNAP is simply that the benefits are too skimpy; the average SNAP recipient gets about $125 worth of food stamps per month. The HEROES Act, passed by the Democrats in the House of Representatives in May, raised the maximum benefit by 15 percent, as well as making other beneficial changes to the program’s rules. But the GOP-controlled Senate and President Donald Trump have shown little interest in anything along these lines.

The Pandemic-EBT has also been a success, getting money to families to enable them to buy meals that children would otherwise have gotten at school. However, it is set to expire at the end of this month. As with a SNAP extension, there is not much appetite among Republicans to take action.

Finally, the government could restart the extra $600 per week in unemployment benefits that lasted until the end of July. Trump’s end run around Congress to provide $300 extra in unemployment has been slow to ramp up, is not available in some states, and will run out of money soon, in any case.

So as of now, hunger in America will continue to be a quiet but extremely dire emergency. “If Congress could see what I see every day, and talk to the families that I talk to, they would take immediate action,” says Tussler from Milwaukee.

But they don’t, and they won’t.

[Jon Schwarz is a writer for First Look Media. Previously, Schwarz worked for Michael Moore’s Dog Eat Dog Films and was a research producer for Moore’s “Capitalism: A Love Story.” He’s contributed to many publications, including the New Yorker, the New York Times, The Atlantic, the Wall Street Journal, Mother Jones, and Slate, as well as NPR.]