Workers Tried To Blow The Whistle On COVID Hazards. Then People Died. 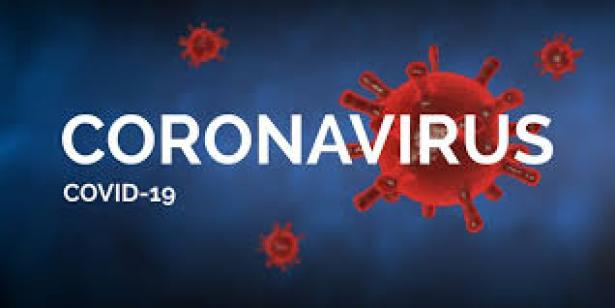 As soon as the coronavirus pandemic began, workers across the country flooded federal and state offices with complaints that their employers weren’t protecting them from the health threat. The concerns have continued to pour into workplace safety agencies for seven months, totaling nearly 40,000 as of Thursday.

It turns out the allegations have been a flashing warning sign all along, according to a new working paper published by the Harvard Center for Population and Development Studies. The analysis of data from the Occupational Safety and Health Administration shows that a rise in workers’ safety complaints has preceded a rise in deaths throughout the pandemic.

Experts looked at complaints filed with OSHA and corresponding state agencies from February to late August, and set the data against fatalities likely caused by the novel coronavirus. What they found was that the curve of the complaints roughly matches the curve of pandemic deaths, with the latter trailing the former by 17 days.

Nancy Krieger, a professor of social epidemiology at Harvard University, said the lag in the time when the deaths occur is a key finding. Workers likely became aware of infections happening around them, felt they weren’t protected on the job and tried to blow the whistle. Then, within a couple of weeks, the number of deaths was increasing.

“It’s not that there were deaths and then people started complaining,” Krieger said. “There were [safety] complaints ― and then the deaths happened.”

A rise in worker complaints (the colored bars) has preceded a rise in deaths from COVID-19 (the black line) throughout the pandemic.

Those trends hold true for the U.S. at large, as well as the four individual regions the researchers looked at, all of which had spikes in deaths at different times. The researchers cautioned that it’s impossible to say how much of a rise in worker complaints could be attributed to growing awareness of the virus, and how much to actual hazards on the job.

But in either case, the increases in worker complaints should have served as an alarm. Instead, the paper concludes, they ended up a “missed opportunity to intervene” by the government.

“People were aware of [the virus]. They were complaining because they didn’t feel protected,” said Bill Hanage, an associate professor of epidemiology at Harvard. “Then the cases that were making them concerned led to the fatalities.” 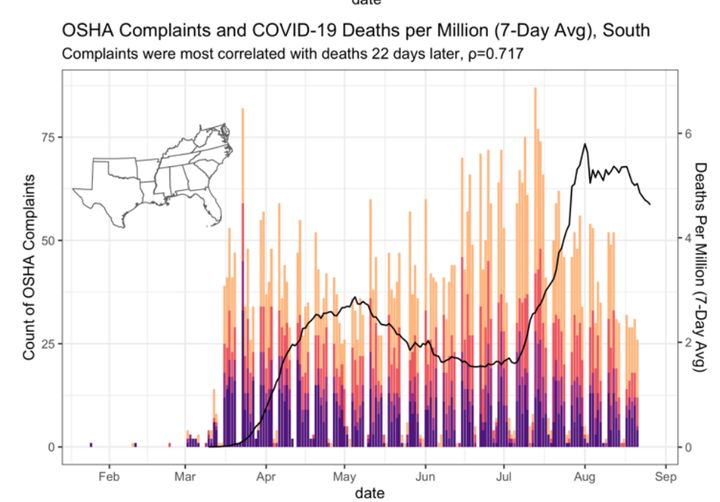 A closer look at how worker complaints in the South have preceded a rise in deaths there.

OSHA has been widely panned for its coronavirus response.

The agency has opened only 206 inspections out of more than 9,300 coronavirus-related complaints from workers. OSHA suffers from chronic understaffing, but workplace safety experts say that under the Trump administration it has failed to use basic tools at its disposal, like setting new emergency standards or issuing hefty fines for violations. (Twenty-one states and Puerto Rico have their own workplace safety agencies that handle complaints, and their aggressiveness varies.)

As of last week, OSHA had issued $484,000 in fines against employers for coronavirus-related hazards. All told, just 37 employers have received citations. Even worksites that were home to major outbreaks and lost multiple workers to COVID-19, like Smithfield and JBS meatpacking plants in South Dakota and Colorado, respectively, were hit with fines only in the low five-digits.

OSHA has defended its performance during the crisis, recently telling HuffPost in a statement that it was working around the clock to protect workers: “OSHA inspectors will not close a case if they have identified any potential citations. ... OSHA will continue to enforce the law and offer guidance to employers and employees to keep America’s workplaces safe.”

But Peg Seminario, a workplace safety expert who helped researchers unpack the OSHA data, said the employee complaints should have prompted more action and could have saved lives with an aggressive response. Workers have grumbled about how difficult it is to get an on-the-ground inspection from OSHA, with the agency often just dealing with employers by phone and fax.

“Workers obviously knew something was going on in their workplaces, raising these concerns,” said Seminario, who led the workplace safety program at the AFL-CIO labor federation for nearly 30 years before retiring in 2019. “Yet we had almost no response.”