US Education Dept. Puts Anti-LGBTQ Activist At Head Of Diversity And Inclusion Council

Multiple employees in the Department's Office of Civil Rights found the appointment ironic and disheartening. 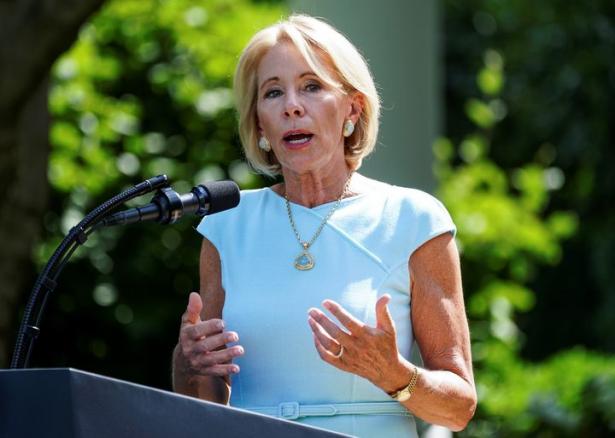 Under Education Secretary Betsy Devos, the Department of Education has threatened to pull funding from schools if transgender students were allowed to participate on sports teams that aligned with their gender identity. , KEVIN LAMARQUE / REUTERS

In early 2020, leaders of the Department of Education’s Office for Civil Rights announced that they would be taking control of and reorganizing the agency’s employee-led Diversity and Inclusion and Employee Engagement Advisory councils. The two committees were combined into one and, in August, senior counsel Sarah Perry, a new hire with a long history of anti-transgender activism, was appointed as a co-chair, HuffPost has learned.

Multiple employees at the Office for Civil Rights (OCR), the department’s agency dedicated to enforcing civil rights laws in K-12 schools and universities, told HuffPost that appointing someone who has actively worked against LGBTQ people to help lead diversity and inclusion efforts is ironic and disheartening.

Perry previously worked at the Family Research Council, a Christian fundamentalist organization that preaches against the rights of the LGBTQ community, where she often spoke publicly about her opposition to transgender people.

At news conference outside the Supreme Court in October 2019, Perry told an audience that children with autism often falsely believe they’re transgender, a baseless assertion.

“By ignoring underlying conditions, the demands of transgender supremacy marginalize our unique kids, especially those with autism and mental health diagnoses,” said Perry, who is an attorney. “They deflect much-needed resources away from the pandemic of autism. They substitute pseudo-science for science. And they leave our children questioning who they truly are.”

Perry’s appointment to the council came a month before the OCR made its latest move discouraging schools from allowing transgender athletes to compete on the team that corresponds with their gender identity.

In September, the office told Connecticut school districts it would withhold millions of dollars in grant money designed to facilitate school desegregation unless the districts withdrew from the Connecticut Interscholastic Athletic Conference, which allows transgender athletes to compete on teams that match their gender identity, The New York Times reported.

The Department of Education previously said it believes such a policy violates Title IX, the law that prohibits sex discrimination in federally funded programs, by potentially giving transgender students a competitive advantage. (Recent court decisions, on the other hand, have largely interpreted trans-exclusionary policies as sex discrimination, though these rulings have not dealt specifically with the issue of athletes.) Civil rights groups have decried the decision as blatantly prejudiced.

In January, HuffPost first reported that a department whistleblower, attorney Dwayne Bensing, had been pushed out of his job after exposing that leaders had violated protocol when working on the Connecticut case.

Perry, who was still working at the Family Research Council, praised the department’s handling of the case multiple times.

“This is really a wealth of good news from OCR,” she said on a podcast. “The notion has been brought up of providing a separate transgender league for these individuals and yet that hasn’t proved sufficient to quell the debate on this. It should be as simple as Title IX protecting biological girls, period.”

At the Family Research Council, Perry was dedicated to opposing the Common Core State Standards, a set of math and English education standards used in most states. On the organization’s podcast, she interviewed and praised figures like right-wing provocateur James O’ Keefe, whose group Project Veritas most recently falsely claimed to have proof of Rep. Ilhan Omar (D-Minn.) committing election fraud. She has also criticized children’s shows like “The Babysitters Club” for incorporating transgender characters.

In early 2020, the OCR, under former leader Ken Marcus, disbanded the employee-led Diversity and Inclusion and Employee Engagement Advisory councils. Leaders then combined the two councils and picked political appointees as new chairs, in addition to the agency’s principal deputy assistant secretary, who serves as a permanent chair of the group.

Alongside Perry, Don Salo — who, Morabito told HuffPost, received the 2016 Secretary of the Army Award for Diversity and Inclusion — is also a co-chair.

Participation in the committees was previously open to all employees, but now is limited to representatives typically approved by regional management. While the decision to overhaul the committees was presented as one designed to make them more comprehensive and strategic, some employees viewed it as a backlash against the councils, which had recently pushed back against new practices.

The committees are used to promote diversity and provide feedback to management, but, according to three current and former employees, the idea that the headquarters-controlled committee could now carry out such tasks is farcical. One told HuffPost that it “seems like a decision to disconnect from making OCR a better and more diverse place” and further disempower workers. Another employee who said they are unhappy and concerned about the changes noted there are others who seem relatively satisfied and seem to like Perry.

In a 2019 survey of OCR staff administered by the Office of Personnel Management and obtained by HuffPost, 60% of respondents said they didn’t think their organization’s leaders maintained high levels of integrity. (A Department of Education official noted that only 65% of OCR staff took the voluntary survey, only half of respondents answered this specific question, and the term “leader” wasn’t defined and could be interpreted as representing a number of different roles.)

In September, the Department of Education put forth internal guidance designed to root out any diversity training that might discuss the concept of white privilege or suggest that “virtually all White people contribute to racism or benefit from racism,” Politico first reported. The guidance is consistent with a administration-wide directive on the issue and means that employee activities like book clubs could face scrutiny.

The new guidance may prove particularly awkward for employees at the Office for Civil Rights, as they regularly recommend that school districts under investigation for race-related issues implement implicit bias training. OCR staff may now have to recommend training to schools that they themselves would not be allowed to take.

Rebecca Klein is a senior reporter for HuffPost. She covers education, politics and policy.