labor They Lost Their Jobs in the Pandemic. Now Defeating Trump is Full-Time Work

Hundreds of laid-off service workers — members of Unite Here, many of them immigrants Trump has insulted — are getting out the vote in Nevada, Arizona, Florida and Pennsylvania. 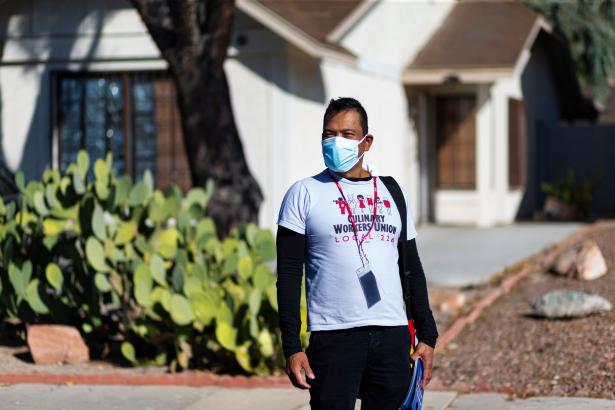 Meniano poses for a portrait while canvassing, MIiranda Alam for HuffPost

Norberto Meniano feels as though everything in his life is riding on this election. So when the 49-year-old unemployed restaurant worker knocks on doors for Joe Biden and Kamala Harris in Las Vegas, he starts the conversation by talking about himself.

As a native of the Philippines, Meniano shudders at the way President Donald Trump denigrates immigrants like himself. As a gay man, he worries about the direction of LGBTQ rights under a conservative Supreme Court. As the husband of a man protected from deportation by the Deferred Action for Childhood Arrivals program, he wonders if the love of his life will be forced to leave. And as a cook on the Las Vegas Strip who’s been out of work since March, he fears he will lose the home he bought last year.

Sometimes, Meniano doesn’t even make it through his story before voters are crying in their doorways, tears running down into their masks.

Meniano is one of millions of workers who lost their jobs earlier in the pandemic and still haven’t been hired back. With his schedule wide open, he is now canvassing full-time in hopes of ousting Trump from the White House. His union, Unite Here, has been paying him and other out-of-work members an hourly wage to knock on doors and get out the vote for Biden and other Democrats.

Unite Here says it has turned more than 1,000 of its members into canvassers in four swing states: Nevada, Arizona, Florida and Pennsylvania. Like Meniano, many are immigrants and other people of color who feel threatented by Trump’s racism and hardline policies. They also face a long and painful spell of joblessness due to a pandemic that the Trump administration has grossly mismanaged. Roughly three out of four of the union’s members are still out of work.

Even though the union is dealing with its own financial struggles, Unite Here President D. Taylor said the program is its largest canvassing operation to date, and donations from other labor groups and nonprofits have made it possible. Although the union declined to name funders, one source is former presidential hopeful Michael Bloomberg, who recently gave $1 million to the union’s canvassing efforts in Florida.

That kind of money has helped pay cash-strapped members while they pour their energy and frustration into political action. With less than two weeks to go before Election Day, they are focusing their efforts on driving up turnout in Democratic strongholds within battleground states.

Taylor said his membership feels a unique urgency, given its high share of immigrants and the way the pandemic has decimated their livelihoods.

“We need a president who actually cares about people, who’s going to be honest, and who’s going to put people like our members before the interests of Wall Street,” he said. “Until we solve the pandemic, it’s hard to see how the economy ever comes back.”

Even as many Americans have returned to jobs lost during the early lockdowns, a growing number now consider themselves permanently laid off. The national unemployment rate is currently close to 8%, but it’s still 19% among workers in the leisure and hospitality sector.

With businesses still shuttered or running at reduced capacity, lost earnings and dim job prospects could affect these workers for years. Unite Here represents workers in the hardest-hit industries: hotels, restaurants and entertainment venues, all places that could take years to return to a pre-pandemic normal.

Thousands of the union’s members at Disney World learned recently that their furloughs were now layoffs. Madi Portes was among them. The 61-year-old Disney cast member helped tourists plan their visits to the Magic Kingdom. Now she spends her days phone-banking for Biden, telling Florida voters that the Trump administration has made both the pandemic and the recession far more painful than they needed to be.

“It’s making the poor poorer. And we are not getting any kind of help from the government,” said Portes, who earned around $15 per hour before her layoff. “The executives of Disney, the people in the administration ― they need to come down and live a day in the life of one of us.”

Trump and Biden are neck-and-neck in Florida, a state Trump carried by roughly 1 percentage point in 2016. The coronavirus has hit the state hard. Case numbers have come down since their peak in July but are still elevated compared to the spring. 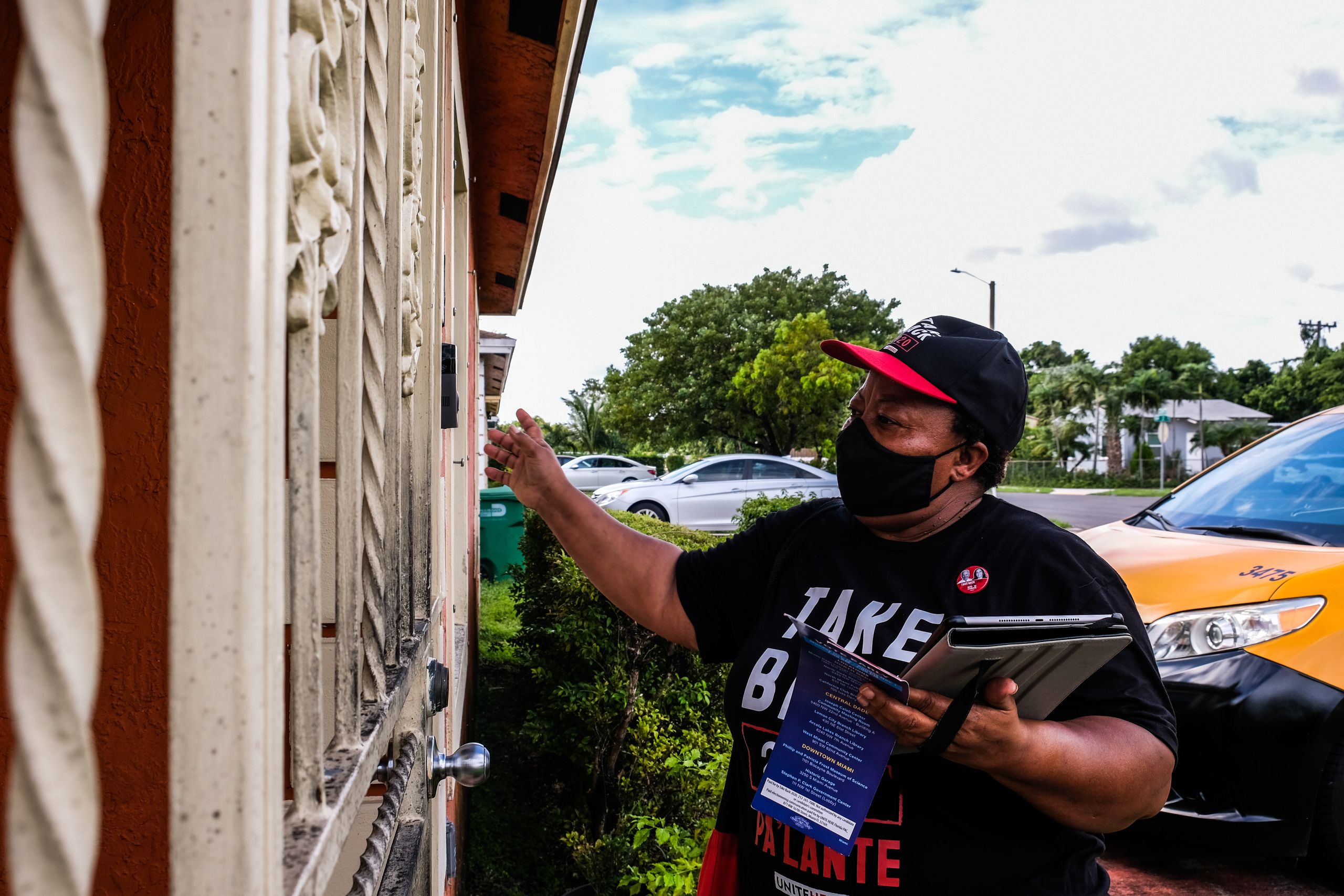 Given people’s skittishness about talking to strangers, the pandemic has made some campaigns reluctant to invest heavily in door-to-door canvassing for the election. Unite Here worked with epidemiologists to put safety protocols in place, likely daily health screenings and the use of both masks and face shields. Some Democratic campaigns have been slow to hit the doors in places like Nevada, as the Los Angeles Times recently reported.

“Frankly, until extremely recently, we were the only ones going door-to-door canvassing,” said Unite Here’s Taylor.

Yolette Lareus said some residents prefer not to open their doors when she canvasses in Miami, but most are willing to have a doorstep conversation while masked. She has been talking to voters for weeks, carrying extra face coverings to give to any resident without one.

The 50-year-old line cook from Haiti was laid off from the Calder Casino in Miami Gardens in March.

“I had to go into my savings to pay for my house and everything,” said the single mother of two.

Lareus said she could be back to work at the casino; she has 27 years of tenure, and callbacks are based on seniority. But since the union can pay her to canvass, she has decided to do that until after the election. She feels a special motivation. Trump has tried to end the protected status of 46,000 Haitians in the U.S. and reportedly called her home country a “shithole.”

“I’m not a shithole person,” said Lareus. “Another four years of this president, I don’t see how we can make it. That’s why I’m doing everything I can.”

After a full day of door-knocking, Lareus often spends the evening on her phone, following up with voters she’s been in contact with to make sure they plan to get their ballots in.

Charles Patton Jr., 36, has worked as a cook inside the Philadelphia airport for seven years. He was laid off in March and hasn’t been called back. For several months he scraped by on unemployment benefits and wages he received from the state for caring part-time for his mother, who is disabled. Now he is working full-time as a canvasser in Philadelphia.

Pennsylvania is one of the key Rust Belt states that put Trump over the top in 2016. Patton is telling voters there to consider the division Trump has sown in the country, and the fact that the pandemic that has killed more than 220,000 Americans and brought economic hardship to millions more.

“Trump hasn’t handled it the way it should have been handled,” Patton said. “It would never have gotten this big if somebody else was there ― somebody who spent more time focusing on what actually matters, instead of tweeting.”

Many laid-off workers who are getting out the vote have no idea what will happen to them after the election.

Maggie Acosta has been canvassing in the battleground state of Arizona. The single mother of two lost her airline catering job in March when travel came to a halt. She worked for a while as a relief coordinator for her union, helping other members navigate the unemployment process, but then realized the most important thing she could do was turn out the vote against Trump.

Acosta was livid after Trump’s crowded church rally in Phoenix in June, where many attendees declined to wear masks. She said the president’s minimizing of the virus and flouting of health guidelines played a large role in her decision to canvass for Biden.

“If they had listened and done what was recommended, I really believe that we wouldn’t be going through all of this,” she said.

Recent polls put Biden and Trump in a virtual dead heat in the state, which could also help determine the Senate majority as Democratic challenger Mark Kelly, an astronaut, leads the incumbent, Republican Sen. Martha McSally. Unite Here says it has 300 members canvassing Arizona ― what it believes to be the largest Democratic door-knocking operation in the state. 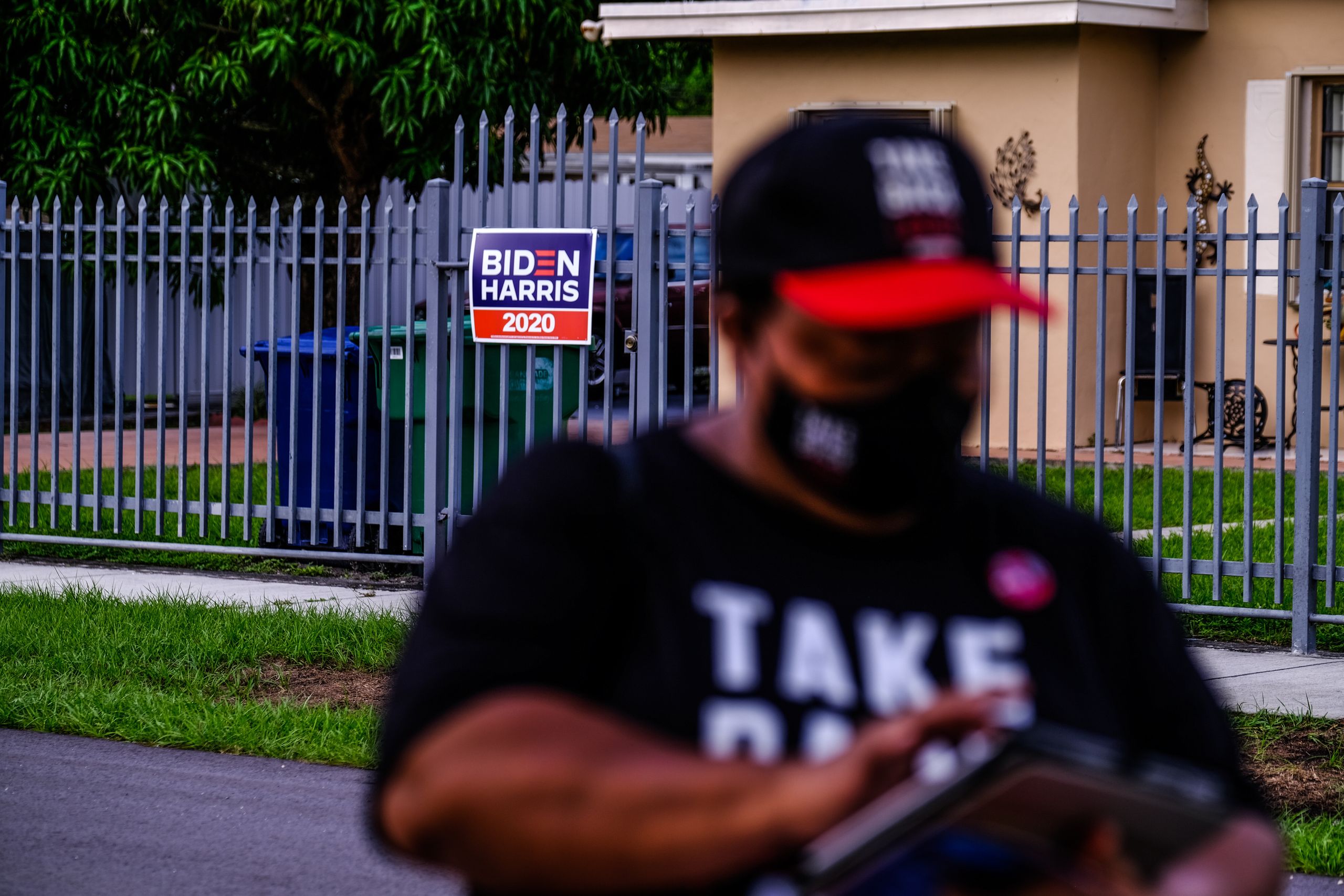 At first, the idea of knocking on doors during a pandemic scared Acosta. Her 22-year-old son got sick with the virus in June while working as an HVAC technician, forcing them both to quarantine. Acosta said she also has a preexisting condition that puts her at risk for a more severe bout of COVID-19.

“I was like, ‘What if I go out and then I get sick?’ But also I’m thinking, ‘Well, what if I don’t do this, and we get another four years of Trump?’” she said. “I’d rather be out there talking to people, mobilizing the vote.”

Acosta said she often wonders how she’ll make her rent and car payments after Nov. 3. The catering contractor she worked for closed its Phoenix office, leaving her with no position to return to, even when air travel rebounds. She’s braced herself for a difficult job search with other unemployed service workers. But talking to voters about the election helps keep her mind off all the uncertainties.