Is There Life on Mars?

Perseverance will use its instruments to look for signs of ancient life in the delta and lake deposits in Jezero crater and will hopefully allow us to finally answer the question of whether there was ever life on Mars. 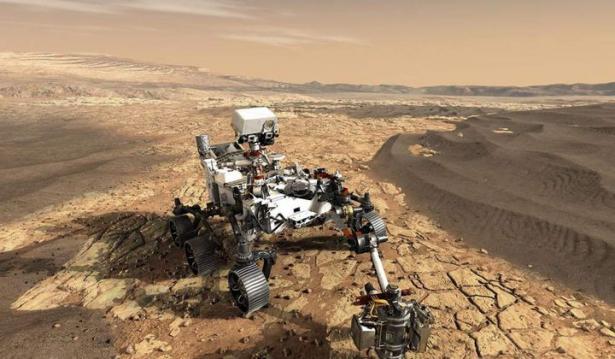 Artist’s conception of the Perseverance rover sampling rocks on the floor of Jezero crater, NASA

“Is there life on Mars?” is a question people have asked for more than a century. But in order to finally get the answer, we have to know what to look for and where to go on the planet to look for evidence of past life. With the succesful landing of the Perseverance rover on Mars on February 18, 2021, we are finally in a position to know where to go, what to look for, and knowing whether there is, or ever was, life on the Red Planet.

Science fiction aside, we know that there were not ancient civilizations or a population of little green people on Mars. So, what sort of things do we need to look for to know whether there was ever life on Mars? Fortunately, a robust Mars exploration program, including orbiters, landers, and rovers, has enabled detailed mapping of the planet and constrained important information about the environment.

We now know that there were times in the ancient past on Mars when conditions were wetter and at least a little warmer than the fairly inhospitable conditions that are present today. And there were once habitable environments that existed on the surface. For example, the Curiosity rover has shown that more than three billion years ago, Gale crater was the location of a lake that held water likely suitable for sustaining life. Armed with information about the conditions and chemical environments on the surface, the Perseverance rover is outfitted with a science payload of instruments finely tuned for extracting information related to any biosignatures that might be present and signal the occurrence of life.

But where should we go on Mars to maximize the chances of accessing the rocks most likely to have held and preserve any evidence of past life? To get at that answer, I co-led a series of workshops attended by the Mars science community to consider various candidate landing sites and help determine which one had the highest potential for preserving evidence of past life. Using data from Mars orbiters coupled with more detailed information from landers and rovers, we started with around thirty candidate sites and narrowed the list over the course of four workshops and five years. Some sites were clearly less viable than others and were weeded out fairly quickly. But once the discussion focused on a couple of different types of potentially viable sites, the process became much tougher. In the end, the science community felt—and the Perseverance mission and NASA agreed—that Jezero crater was the best place to look for evidence of past life on Mars.

The landing site for the Perseverance rover is on the floor of Jezero crater and will enable the rover to access and interrogate rocks deposited some 3.5 billion years ago in an ancient lake and river delta that are deemed as having a good chance of incorporating and preserving ancient biosignatures. ((ESA/DLR/FU-Berlin))

What is so special about Jezero crater and where is it? Jezero crater is ~30 miles (~49 km) across, was formed by the impact of a large meteorite, and is located in the northern hemisphere of Mars (18.38°N 77.58°E) on the western margin of the ancient and much larger Isidis impact basin. But what makes it special relates to events that happened 3.5 billion years ago when water was more active on the surface of Mars than it is today. Ancient rivers on the western side of Jezero breached the crater rim and drained into the crater, forming a river delta and filling the crater with a lake. From the study of river deltas on the Earth, we know that they typically build outwards into lakes as sediment carried by the associated river enters the lake, slows down, and is deposited. As this process continues, the delta builds out over the top of lake beds and can bury and preserve delicate and subtle signatures of past life. These “biosignatures” are what Perseverance will be looking for when it lands on the floor of the crater and explores the ancient lake beds and nearby delta deposits.

Perseverance will use its instruments to look for signs of ancient life in the delta and lake deposits in Jezero crater and will hopefully allow us to finally answer the question of whether there was ever life on Mars. In addition, Perseverance will begin the process of collecting samples that could one day be returned to Earth. The importance of sample return cannot be overstated. Whether or not evidence of past life is found by Perseverance’s instruments, the legacy enabled by samples the rover collects will be the “scientific gift that keeps on giving”. Once returned to Earth by a future mission, these Mars samples can be subjected to more detailed analysis by a much wider set of instruments than can be carried by Perseverance. Moreover, sample archiving can preserve material for future analysis here on Earth by new and/or more detailed instruments that may not yet exist. So even if Perseverance does not find evidence of past life, it will collect samples that, once returned to Earth, could provide new insight into the evolution of Mars and whether there was ever life on the Red Planet.