Unions were concerned not just for their beloved Scabby but for broader First Amendment rights during labor protests. 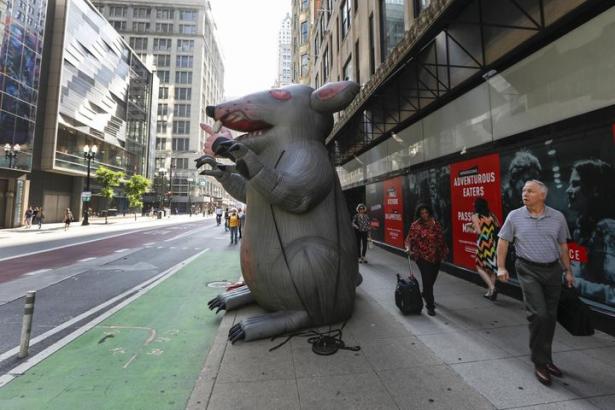 Scabby the Rat lives to see another day.

The beloved inflatable rodent, a fixture at U.S. labor protests for decades, survived near-extermination Wednesday when the National Labor Relations Board ruled that the use of Scabby in labor disputes was legal.

The case before the NLRB could have effectively banned Scabby’s presence outside businesses on the grounds that the rat was so off-putting and intimidating as to be “unlawfully coercive.” But the board ultimately found in favor of the International Union of Operating Engineers Local 150, which had deployed the 12-foot rat outside an Indiana RV trade show in 2018.

The target of the union’s protest, RV parts supplier Lippert Components, filed a complaint with the labor board due to the bad publicity drawn by Scabby. But in a 3-1 decision, the board ruled to dismiss the complaint, saying that to do otherwise could infringe on the union’s First Amendment rights. (The board typically has five members, but one seat is vacant.)

“[T]he courts have consistently deemed banners and inflatable rats to fall within the realm of protected speech, rather than that of intimidation,” the board’s chair, Lauren McFerran, wrote in her decision, saying her position was consistent with NLRB precedent.

The decision appears to put an end to the war against Scabby started under former President Donald Trump.

Republican board members often side with businesses in contentious cases, but McFerran was joined by two GOP members in her opinion: Marvin Kaplan and John Ring. The other board member, Republican William Emanuel, dissented, ruling that the use of Scabby violated the National Labor Relations Act.

The decision appears to put an end to the war against Scabby started under former President Donald Trump. The Trump-appointed NLRB general counsel, Peter Robb, had wanted to ban Scabby’s use under certain circumstances. The general counsel acts as a quasi-prosecutor and brings cases on behalf of unions and employers before the board.

In the Lippert case, Robb argued that Scabby’s deployment was unlawful because Lippert Components was a “neutral” employer ― that is, the union’s members didn’t work for Lippert but for a business that had a relationship with Lippert. Under Robb’s argument, posting Scabby at the RV show amounted to an illegal “secondary boycott.”

Due to the significance of the case, the labor board invited interested parties to submit briefs arguing for or against the legality of Scabby.

Unions were concerned not just for their beloved Scabby but for broader First Amendment rights during labor protests. Robb had pursued at least one other complaint against a union over the use of an inflatable rat.

In a precedent-setting move, President Joe Biden fired Robb at the urging of unions on his very first day in office. Biden replaced Robb in a temporary capacity with Peter Sung Ohr, a longtime NLRB official. Ohr soon moved to withdraw the Scabby-related complaints pursued by his predecessor, saying they were a “waste of valuable agency resources.”

Biden’s nominee to replace Ohr as general counsel, union attorney Jennifer Abruzzo, was confirmed Wednesday by the Senate on a party-line vote of 51-50, with Vice President Kamala Harris casting the tie-breaker. Republicans were furious that Biden ousted Robb before Robb’s term was over, and not a single GOP senator voted in favor of Abruzzo’s nomination as general counsel.

Biden has already nominated two new members to the five-person board and can flip control to Democrats by the end of the summer.