A civil lawsuit four years in the making ended on a high note for plaintiffs this week, when a jury awarded more than $26 million in damages. 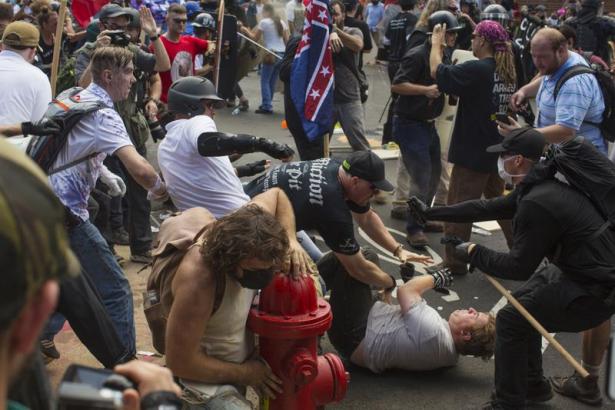 The Charlottesville, Virginia, civil trial of a group of white nationalist extremists was not broadcast on television ― the federal judge assigned to the case forbade anyone from even recording audio of the proceedings. Members of the public who wanted to follow along had to dial in to an occasionally glitchy conference line, day after day, over four weeks, for what often amounted to a bizarre auditory spectacle.

This was especially true when extremism experts brought to testify for the plaintiffs were cross-examined by the same kind of extremists they’ve studied.

“It was a surrealistic experience,” Dr. Deborah Lipstadt, an acclaimed Holocaust scholar and a history professor at Emory University, told HuffPost on Wednesday after appearing on the witness stand earlier this month.

Lipstadt has spent years advising members of Congress on matters of anti-Semitism and hate speech. In September, President Joe Biden nominated her to a new, ambassador-level position, as special envoy to monitor and combat anti-Semitism. (Her confirmation is currently stalled in the Senate.)

She was also approached by the Charlottesville plaintiffs’ team to weigh in on the “Unite the Right” rally at the center of their civil lawsuit. Dr. Peter Simi, a sociology professor at Chapman University who studies extremism, likewise gave his professional take on the rally and the planning that went into it. Each submitted a report on the rally that was discussed at trial.

Over two days in August 2017, hundreds of people descended on Charlottesville ostensibly to protest a proposal to remove a Confederate monument there. The vast majority were white men. They brought torches and marched in formation across part of the University of Virginia’s campus until they squared off against a group of counterprotesters gathered around a statue of the school’s founder, chanting threats and yelling obscenities. The following day’s events devolved into a gruesome scene of violence when a young white man plowed his car into another group of counterprotesters, killing one woman and injuring dozens of people.

The suit’s nine plaintiffs scored a major victory on Tuesday when, after about three weeks of witness testimony and three days of deliberation, a jury found the defendants participating in the case liable for more than $24 million in punitive damages and about $2 million in compensatory damages ― hefty sums that they have vowed to fight.

On the stand, Lipstadt read aloud some of the planning messages sent by the event’s organizers. She testified that she was “taken aback” by the level of anti-Semitism and the adulation for Nazi Germany evident in the discussions.

She was also ready to confront the defendants.

“I was deeply disappointed that Richard Spencer didn’t cross-examine me,” she said.

Spencer, a white nationalist credited with coining the term “alt-right,” was one of two defendants who represented himself at trial after failing to hire an attorney. The other was Christopher Cantwell, a racist podcaster currently serving prison time for extortion. 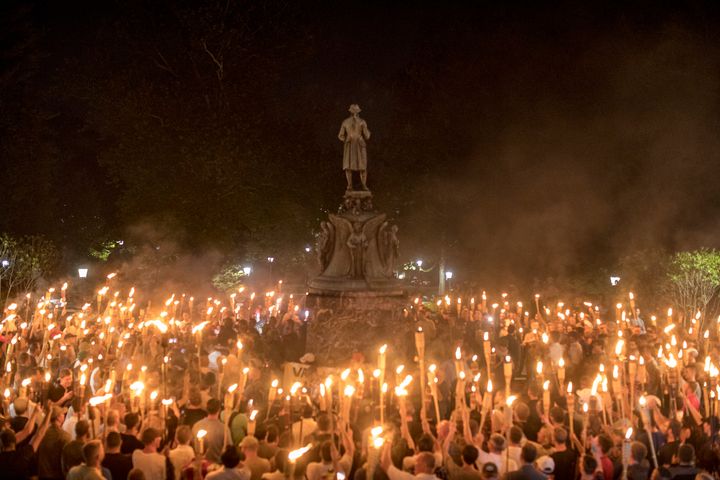 A group of torch-bearing white nationalists rally around a statue of Thomas Jefferson on Aug. 11, 2017, in Charlottesville, Virginia (photo via Associated Press)

Cantwell did cross-examine Lipstadt, although his questioning came to an end after he failed to elicit agreement from her about the Holocaust being a good subject for jokes.

“I was prepared. I was prepared, really, to go head-to-head with them,” Lipstadt said. “I knew they were going to try to punch holes in everything I said.”

Simi also told HuffPost that he’d expected some sort of confrontation with Spencer and Cantwell. “But then also the attorneys, in some cases, were not any different,” he said. “I’d say Josh Smith, actually, his cross-examination ― the only word I can describe it as is ‘unhinged.’”

Smith, who represented the white nationalists Matthew Heimbach and Matthew Parrot as well as the now-defunct Traditionalist Worker Party, skated over a variety of topics in his cross-examination, at one point bringing up various aspects of Asian culture. At another point, Judge Norman Moon cut him off, saying simply: “The question makes no sense.”

Simi also testified about the misleading “joking” element of white nationalism, explaining that because of the movement’s penchant for doublespeak and layering messages with irony, seemingly tongue-in-cheek statements about violence against Jews and people of color are never really innocent.

He hoped that the case would one day help historians explain what happened in August 2017.

“Sometimes we forget that a legal case can really help do that, in terms of providing a historical record,” Simi said. “I think that it’s so important for a healthy, functioning democracy, is you have to have accurate historical records.”

Both experts hoped that the Charlottesville jury’s verdict would send a sharp message to extremist groups around the country, discouraging them from plotting similar events. Amy Spitalnick, executive director of Integrity First for America ― the nonprofit that brought the suit ― expressed a similar sentiment, telling HuffPost on Wednesday that “violence and hate will have consequences.”

“Certainly this resounding win for our plaintiffs underscores that,” she said.

Attorney Roberta Kaplan, who served as co-lead counsel for the plaintiffs alongside Karen Dunn, stressed her intention to ensure the plaintiffs are actually paid the damages they are owed. In an interview with Law.com after the verdict was handed down, Kaplan cited her experience working on judgment enforcement cases, saying: “I knew how to do it then, and we’ll have to do it again here, if necessary.” Several of the plaintiffs are under age 40, meaning the obligation to pay damages may follow them around for years to come.

Kaplan also said in court Tuesday that the plaintiffs’ legal team was considering whether to retry two claims that deadlocked the jury. Both involved the U.S. Ku Klux Klan Act of 1871, a now rarely used law that once helped take down the KKK. Retrying those claims could lead to even more damages awarded the plaintiffs.

While the case may be viewed as a win, however, the threat of white nationalism is not easily defeated. Lipstadt and Simi both emphasized the importance of remaining vigilant against racial hatred.

Simi also worries about the future. He called the Jan. 6 attack at the U.S. Capitol “in many respects a direct line” from Charlottesville.

“We have elections coming and we have people in Congress like [Republican Rep.] Paul Gosar [of Arizona], who speak the same language of those who organized Unite the Right,” he said. “You know, we’ve got folks like Tucker Carlson expressing ideas related to replacement theory. So, I mean, we are in a very dangerous time.”

“When I think about the possibilities of what could happen, I don’t sleep well at night,” Lipstadt said. “This is not going away.”