It was a profound scene with remarkably little fanfare: Haaland, the nation’s first Native American Cabinet secretary, honored the efforts of the Native American activists who stood up to the government by taking over the island and reclaiming it... 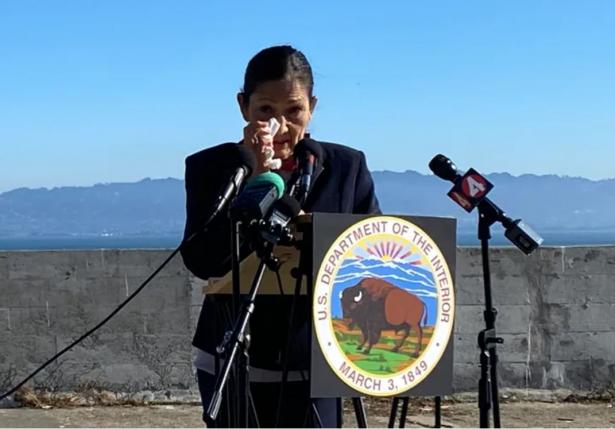 ALCATRAZ ISLAND, Calif. ― In a speech that moved people to tears, including herself at moments, Interior Secretary Deb Haaland on Saturday marked the 52nd anniversary of Indigenous activists’ occupation of Alcatraz Island, crediting their acts of defiance with paving the way for her own path and the Biden administration’s work to empower tribes.

It was a profound scene with remarkably little fanfare: Haaland, the nation’s first Native American Cabinet secretary, honored the efforts of the Native American activists who stood up to the U.S. government by taking over the island and reclaiming it as their own.

That 1969 protest group, which called itself Indians Of All Tribes, occupied the island for 19 months to highlight continued abuses by the U.S. government and to assert tribal rights to reclaim land. Their takeover became a landmark event that reinvigorated the Indigenous rights movement nationwide and spurred legislative and cultural changes.

Speaking in front of about a dozen people who had either participated in the occupation or whose family members did, Haaland said she was only 9 years old at the time. “I didn’t understand it then, but my very existence as a Native child was in some ways an act of defiance against historic policies to exterminate Indigenous cultures, traditions, languages, and essentially us as a group of people,” she said, choking up.

“The fact that I’m standing here today is a testament to that fact,” said the interior secretary. “I am here. We are here. And we are not going anywhere.”

Haaland described “a new era” for Indigenous people and said President Joe Biden has been a “courageous” leader for tribes. She described actions he’s taken to strengthen tribes, including major investments in infrastructure, more resources for addressing missing and murdered Indigenous women, and new protections for sacred Indigenous sites like Bears Ears National Monument. She also highlighted last week’s White House Tribal Nations Summit, which gave tribal leaders a chance to speak directly to top administration officials about federal policies that affect them and their communities.

“I mean, if I’m not bold, what am I doing here? When I say we’re in a new era, I really mean that.”
- Interior Secretary Deb Haaland

“Representation matters. Being here matters. No longer do Indigenous people have to occupy a site to get the attention of the government,” said Haaland. “We are at the table and we are not giving up our seats.”

You can watch her full speech below: 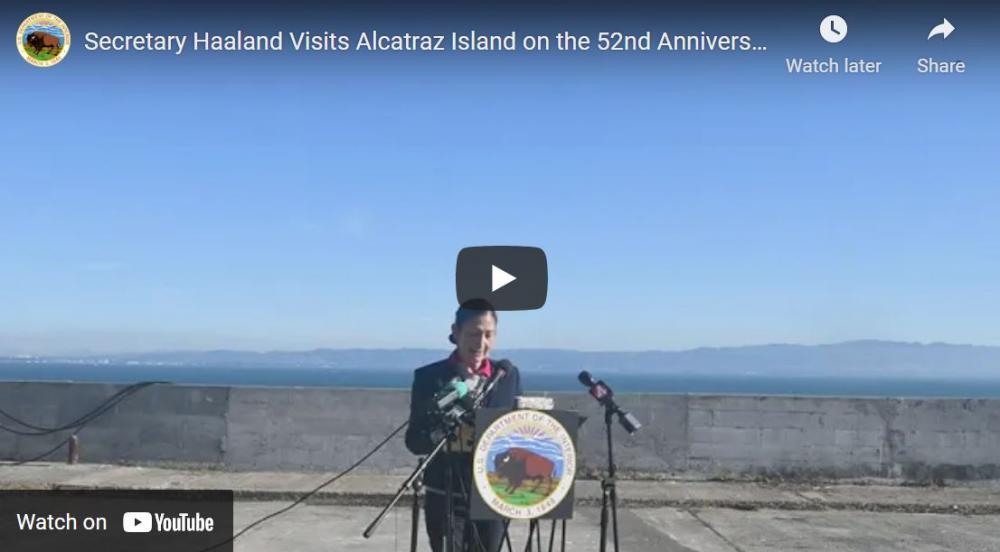 There was hardly any press at the event beyond local media. The interior secretary spoke at a lectern against the backdrop of the sweeping San Francisco Bay, on Alcatraz’s parade ground, where U.S. military officials used to practice drills. The space is now used for annual sunrise ceremonies to commemorate the Indigenous activists’ occupation. It was such a serene scene that a group of pelicans flying overhead in a V-shaped formation temporarily drew everyone’s attention, even Haaland’s, as the speech was underway.

But these were powerful words for the people in attendance. Some were visibly emotional and nodding during Haaland’s speech. In an interview just after her remarks, HuffPost asked the interior secretary if she felt like she was making a bold statement as a U.S. government official honoring Native activists who took over Alcatraz until they were forcibly removed by the U.S. government.

“I mean, if I’m not bold, what am I doing here?” she said. “When I say we’re in a new era, I really mean that. And it’s possible because of the president that we have. I want people to know and understand how courageous President Biden is.”

Had she been a little older at the time, Haaland said, she could see herself having joined the activists occupying Alcatraz in 1969.

“Absolutely,” she laughed. “In a heartbeat, I’d be here.”

It’s an annual tradition for some to visit Alcatraz Island on the anniversary of the occupation, which activists claimed was fully within their rights. The 89 people who originally took over the island cited a treaty between the U.S. and Lakota tribe stating that all out-of-use federal land must be returned to the Indigenous people who once occupied it. That was the case with Alcatraz Island in 1969, and the activists said it was rightfully theirs.

At the height of the occupation, 400 people lived on Alcatraz and had set up a school, a day care, a health clinic and a radio station and oversaw regular shipments of food and supplies to the island. But in May 1971, the U.S. government cut off all power and telephone service to Alcatraz. Between that and a mysterious fire that destroyed several buildings, the number of occupiers declined until federal marshals came in and removed all remaining people in June of that year.

Nancy Ukai was 15 years old when her mom brought her along in a boat to deliver food and supplies to the Alcatraz occupants.

“It was freezing cold. We were in the cell blocks, so it was very dank,” recalled Ukai, who was riding the ferry to Alcatraz on Saturday morning to mark the anniversary of the occupation. “I was the youngest one, I think. It was just awesome to be a part of something to help people who you felt you wanted to support, to be in solidarity with them.”

Ukai, who is Japanese American and lives in Berkeley, was holding a poster with a newspaper clipping on it from March 1970, which featured a photo of her mom standing with Indigenous activists. She and her mother were part of a group called Japanese Americans Citizens League at the time, which supported the Alcatraz occupation.

“Obviously the occupation ended,” said Ukai, “but it was the beginning of something which I think empowered all kinds of communities. To see that Deb Haaland is coming here today. … I have a lot of respect for her and the Biden administration.”

Asked if it seemed like a bold move by Haaland to stand with Native activists who challenged the U.S. government, Ukai said, “I think it’s her duty.”

Akemi Yamane was also on the ferry, holding a massive paper crane she’d made and illustrated with images of Native Americans occupying Alcatraz. It had a message on it: “Indians of All Tribes in solidarity turned the tide.”

Yamane, also Japanese American, said some in her community feel a sense of camaraderie with Indigenous people because of the oppression both have faced from the U.S. government. She referred to the forced relocation and imprisonment of 120,000 Japanese people in America during World War II.

“There’s so much the Indians have suffered, all these centuries. I mean, this is their land. We took it away,” said Yamane. “And exactly like us, some of the American concentration camps were on Indian land. So, it’s kind of close to home.”

As for the significance of Haaland coming to Alcatraz, Yamane said it was “wonderful.”

“She can do so much. Well, as much as they allow her to do,” she said with a laugh. “I mean, she has the heart, right? She’s part of the people.”

Aaron Payment, chairperson of the Sault Ste. Marie Tribe of Chippewa Indians and secretary of the National Congress of American Indians, said Haaland reminded him of Wilma Mankiller, a renowned Indigenous activist who was involved in the Alcatraz occupation and went on to become the first woman elected principal chief of the Cherokee Nation.

He personally knew Mankiller and said she inspired his own college activism when he led a Native American student organization.

“Recognizing that moment in time as a mobilization moment, and knowing the connection from Wilma Mankiller to Deb Haaland ... for another Native woman to be leading Interior, it’s really exciting that we’re seeing this come to fruition in our lifetime,” Payment said in a phone interview.

As the ferry pulled up to Alcatraz, Jesus Perez Moya was chanting and playing a hand drum. He said he’s come to the island every year since 1989 to mark the anniversary of the occupation. This year, he said, felt especially meaningful because of Haaland’s presence.

With that, Moya began hitting his drum and wandering away.

“We’ve got to keep this thing moving every year,” he said. “Every year.”

[Jennifer Bendery is a senior politics reporter for HuffPost. She has covered Congress and the White House for HuffPost since April 2011. She previously reported on Congress for four years for Roll Call, a Capitol Hill newspaper, and spent four years covering the Texas Legislature for GalleryWatch in Austin, TX. She also worked in book publishing for three years in San Francisco and was a health care policy reporter for two years in Providence, RI.]