The Kansas Abortion Vote Was a Stunner. But What Does It Mean for the Midterms?

A surge in grassroots activism on behalf of abortion rights. An abrupt drop in small donations to Republicans. A slew of polls showing that the ruling in Dobbs was highly unpopular. Kansas shows if abortion is a prominent issue, they and we can win.

August 4, 2022 Jonathan Cohn Huff Post
Printer friendly
The Kansas Abortion Vote Was a Stunner. But What Does It Mean for the Midterms? Published August 4, 2022 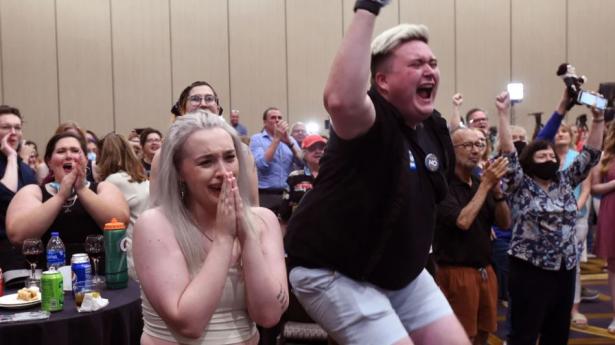 Nearly six weeks have passed since the Supreme Court took away the right to abortion in America and in that time there have been multiple signs of a backlash in the making.

A surge in grassroots activism on behalf of abortion rights. An abrupt drop in small donations to Republicans. A slew of polls showing that the ruling in Dobbs v. Jackson Women’s Health Organization was highly unpopular.

But these were just hints. There was no way to know whether the decision would affect election results ― until Tuesday, when Kansas voters decisively rejected an anti-abortion ballot measure.

The proposal would have amended the Kansas constitution, clearing the way for Republican lawmakers to enact sweeping, possibly total bans on abortion. It failed by 18 points.

Or, to put it another way, nearly 6 in 10 Kansans just voted to keep abortion legal ― which, as HuffPost’s Alanna Vagianos explained in her dispatch from Wichita, has big significance beyond state borders.

“Since Roe fell, just over a dozen states in the South and Midwest have already severely restricted or banned abortion, making Kansas an unexpected refuge for abortion care. Texas, Oklahoma, South Dakota, Missouri and Arkansas all have total abortion bans in effect. Other states, including North Dakota, Nebraska, Wyoming and Iowa, are in court challenging severe restrictions or waiting on bans to take effect. Put all those states together and you have most of the Midwest and much of the South.”

But what about the political implications? Just how much optimism can abortion rights defenders take from Kansas? What would it take to get similar results in other states and nationally?

The Turnout Numbers Are Mind-Boggling

Probably the most encouraging sign for abortion rights supporters is the turnout numbers. About 910,000 residents cast ballots, which is more than twice the turnout rate of the last two primaries and approaching presidential election levels.

A particularly telling statistic is the turnout among “unaffiliated” voters ― that is, Kansans who didn’t register with one party or the other, meaning they couldn’t even vote in the nominating contests for U.S. Senate, governor and other races.

“This was done intentionally to make sure people wouldn't vote, and I think the opposite happened.”

In recent primaries, only a few thousand unaffiliated voters cast ballots. This time, more than 150,000 did, according to a tabulation by Daniel Donner, a contributing editor at DailyKos elections.

The figures are especially remarkable given that amendment’s backers chose the August primary contest, rather than November’s general election, because the primary typically gets lower, more Republican-leaning turnout.

“This was done intentionally to make sure people wouldn’t vote, and I think the opposite happened,” Ethan Winter, a senior analyst at Data for Progress who ran field polls on the Kansas referendum, told HuffPost. “This was a commanding win.”

It’s about who registered to vote in Kansas after June 24, the date that the Supreme Court handed down the Dobbs decision. Democrats had an 8-point advantage during that time span, TargetSmart CEO Tom Bonier noted on Twitter, even though GOP registrations outnumbered Democrats statewide by 12 points. And 70% of the new registrants were women.

That last part is particularly interesting given some recent history. Donald Trump’s presidency galvanized women voters, many of whom were disengaged from politics beforehand. It’s a big reason Republicans lost control of Congress in 2018, and he lost the presidency in 2020.

It’s not so hard to imagine something similar happening now, as the Dobbs decision makes real a threat to women’s rights that previously was, or seemed to many, purely hypothetical.

All that said, some of the political conditions in Kansas were working against the amendment in ways that they might not work against similar measures in other conservative states ― or against candidates who oppose abortion rights in those states.

For one thing, ballot initiatives can run into “status quo bias.” Voters are naturally suspicious of change, and there’s actually a history of abortion restrictions failing at the ballot box, even when polls suggest the the public is sympathetic to the cause. (Jonathan Robinson, director of research at Catalist, wrote about that phenomenon here.)

And although Kansas is a red state in a red part of the country, it’s not quite as conservative as it might seem. Its sitting governor is a Democrat and public opinion on abortion is evenly divided, according to Pew Research.

“The central plains states are less socially conservative than their reputations,” said Natalie Jackson, research director at PRRI (and HuffPost’s former senior polling editor). “Kansas is not Oklahoma. Kansas is not Texas. … Kansas is not the deep South.”

Another caveat is that Republican voters who would reject abortion bans in an up-or-down vote wouldn’t necessarily reject candidates who support such bans ― in Kansas or anywhere else.

A Lot Depends On Framing In November

All that said, Democrats trying to win elections can succeed by winning over even a small number of Republican voters ― or by boosting turnout among Democrats and independents who prioritize abortion rights.

“The strategy for a candidate in a swing district, for a Democrat, is definitely to keep abortion top of mind ― keep beating that drum, that Republicans will act to take this right away,” Jackson said. “It may not necessarily shift votes, but it can have a significant impact on turnout … if you’re a Democrat, you’re leaving a lot on the floor if you’re not pushing on abortion.”

It’s also possible that Dobbs has changed the usual dynamics of a midterm election, in which a new president with a congressional majority tries to push through an ambitious agenda ― and then suffers a rebuke because the public becomes anxious about so much change.

“I’ve always described the midterm effect as a kind of balancing,” Winter said. “But with Dobbs, Republicans are the ones pushing the biggest disruptions to the status quo.”

Winter said the effects could be especially strong in states where Democratic governors or gubernatorial candidates can make a case they and their allies in the legislature are the ones standing in the way of new restrictions or bans on abortion that Republicans would enact.

One state where that may already be happening is Michigan, where Tudor Dixon on Tuesday won the primary to challenge incumbent Democratic governor Gretchen Whitmer. Dixon has said she supports a 1931 abortion law that’s still on the books and would oppose creating exceptions for rape or incest.

Whitmer has been warning about the threat to abortion rights for months. She and Democratic Attorney General Dana Nessel have vowed not to enforce the 1931 law, while asking Michigan’s Supreme Court to declare the ban incompatible with the state’s constitutional guarantees of individual rights.

Whitmer, Nessel and fellow Democrats across the state are also backing a ballot measure that would enshrine reproductive rights in the state constitution once and for all. It’s on the ballot because organizers submitted more than 750,000 signatures, which was both a record and nearly twice what the measure needed to qualify. (Several other states also have such measures on their November ballots.)

After Tudor won the nomination on Tuesday, Whitmer wasted no time making abortion rights the issue. A fundraising email that went out at 10:30 p.m. called Dixon a “dangerous candidate,” and backed that with Dixon quotes on abortion. All signs point to more attacks like that ― on the stump, over social media and on the airwaves.

Not every Democrat running in November will be able to make abortion such a prominent issue in their campaigns. But if Kansas shows anything, it’s that Democrats should try ― and that, if they succeed, they can preserve abortion access for millions.

[Jonathan Cohn, Senior National Correspondent at HuffPost, writes about politics and policy with a focus on social welfare. He is also the author of SICK (2007, HarperCollins) and THE TEN YEAR WAR (2021, St. Martin's). Jonathan worked previously at the New Republic and American Prospect, and has written for the Atlantic, New York Times Magazine, and Self, among other publications. His journalism has won awards from the Sidney Hillman Foundation, the Association of Health Care Journalists, World Hunger Year, and the National Women's Political Caucus. Jonathan, who is a member of the National Academy of Social Insurance and has been a visiting lecturer at the University of Michigan, can be reached at jonathan.cohn@huffpost.com]

The Night Before: Vote No Kansas - August 1 Message - Before the Vote 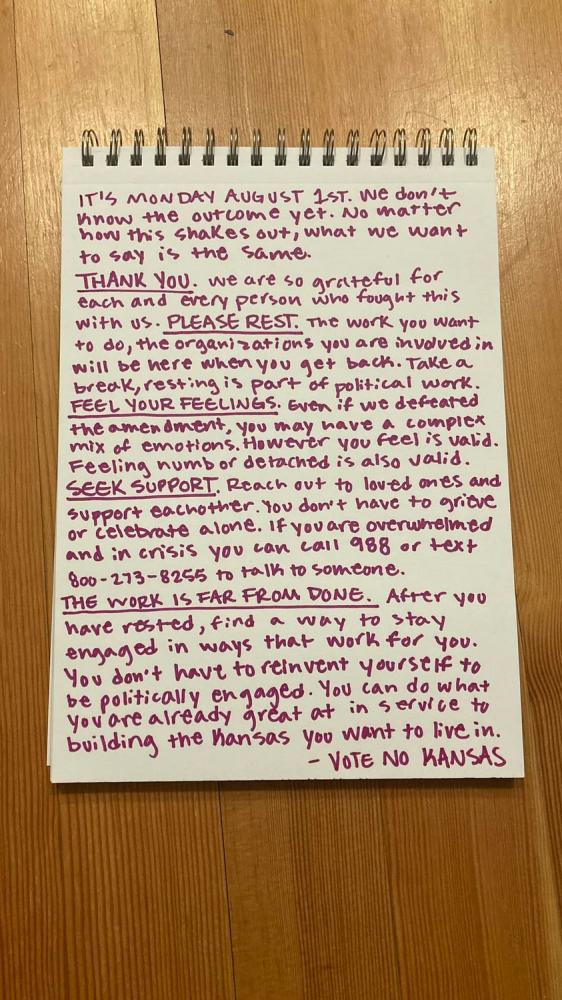 We are taking a break. We scheduled this post before knowing anything about the results. Please follow trusted news sources for information. We will be back after we rest.

"It's Monday August 1st [as we write this]. We don't know the outcome yet. No matter how this shakes out, what we want to say is the same.

THANK YOU. We are so grateful for each and every person who fought this with us.

PLEASE REST. The work you want to do, the organizations you are involved in will be here when you get back. Take a break, resting is part of political work.

FEEL YOUR FEELINGS. Even if we defeated the amendment, you may have a complex mix of emotions. However you feel is valid. Feeling numb or detached is also valid.

SEEK SUPPORT. Reach out to loved ones and support eachother. You don't have to frieve or celebrate alone. If you are overwhelmed and in crisis you can call 988 or text 800-273-8255 [ @ksphq ] to talk to someone. [alternate resource Trans Lifeline]

THE WORK IS FAR FROM DONE. After you have rested, find a way to stay engaged in ways that work for you. You don't have to reinvent yourself to be politically engaged. You can do what you are already great at in service to building the Kansas you want to live in.