Florida Has an Outrageous New Law Targeting Teachers. Here’s Why I’ll Be Breaking It.

"My students aren’t the snowflakes Gov. DeSantis assumes they are... and neither am I." 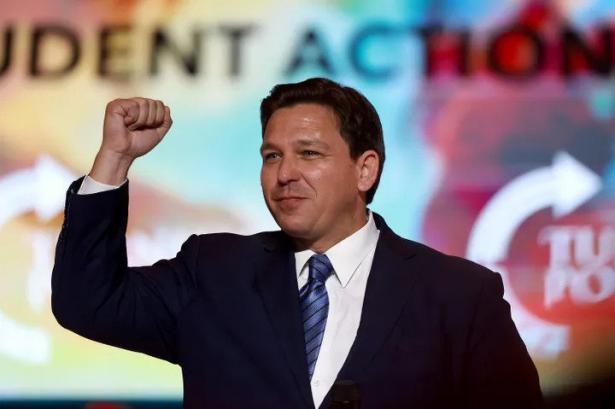 In a couple of weeks, I’ll walk back into my college classroom and continue my second decade of teaching at one of Florida’s universities. Despite the recently passed HB 7 Amendment (Stop WOKE Act), I won’t be adjusting my syllabi to remove readings or discussions that make students “uncomfortable,” and I won’t pretend that systemic racism, sexism, homophobia, Islamophobia and other forms of oppression do not exist. I will not “whitewash” our country’s history or minimize the challenges and oppression that so many still experience, especially those who are women and/or members of the BIPOC and LGBTQIA+ communities.

Instead, I will do what I have always done. I will select the creative work of writers who belong to all sorts of communities, and I will require students to read their stories and discuss the work and their themes. Some of those themes are difficult and may make many of us uncomfortable, no matter how we identify or what community we’re in.

But my students aren’t the snowflakes Gov. DeSantis assumes they are... and neither am I. We can take a little discomfort in our efforts to become a more educated ― and empathetic — group of people. The author Chimamanda Ngozi Adichie warns us that, “The single story creates stereotypes, and the problem with stereotypes is not that they are untrue, but that they are incomplete. They make the one story become the only story.” Those of us who are able to come to college do so, in part, I hope, to expand our worldview. And my students come to learn how to tell their own stories, and one of the ways we teach that is to study what others have done.

I purposefully select work by members of marginalized communities, because many of my students have not yet heard these voices... and many of my students belong to these communities. Recently, among other work, my students read, “Heavy: An American Memoir″ by Kiese Laymon and poems by Danez Smith. Both of these authors address race, class, whiteness, sexuality, politics, family and body image. Smith’s work also addresses homophobia and police brutality, and other topics that are “uncomfortable.”

HB 7 (with its clever Stop WOKE nickname) is obviously created to protect the white, straight student who is theoretically being made to feel “guilt, anguish, or other forms of psychological distress,” as the bill lists in one of its “specified concepts” that seeks to refute that anyone is privileged or oppressed. But my white, straight students do not respond in the way DeSantis or his constituents fear they will.

In a discussion post about “Heavy,” one student wrote, “I feel like this was such a good insight into a world I know nothing about.” Another commented, “Hearing stories through own-voices memoirs is a great way to open the eyes of so many people who don’t understand what it’s like to be Black in America (or a woman, or part of the LGBTQ+ community, etc.), and allows them to experience a first-hand account of what they have to go through on a daily basis, and how we should use our voices to demand a safer environment for all who live here, regardless of race, gender or sexuality.” They have not been “indoctrinated” by me. They have become enlightened by someone else’s story.

In truth, I worry more about my students in marginalized communities feeling “psychological distress” with my reading lists and our class discussions. As one of my students said when discussing “Heavy,” “I’ve lived this book, and I’ve heard other stories from my mother. Instead of informing me, it just reminded me of the pain of the real world.” Too often, people in marginalized communities sit silently in class when white people express shock at their experiences. And, yes, it’s uncomfortable, but it’s also necessary.

If we have any chance in uniting our country and finding a way to reasonably discuss controversial topics — while actively working toward change — educators must model how to do so. Politicians — and the corporations, lobbyists, media groups, etc. who feed them (and are fed by them) ― are the only ones who benefit from our discord. It stands to reason, then, that instead of promoting an educational system that seeks to include the experiences of all, DeSantis’s recent legislation seeks to silence experiences that do not fit an image of America that never actually existed. It’s just another strategic move in a culture war that no one wins — except perhaps those looking at a presidential bid.

I don’t want to make these accusations. In fact, I don’t want to write this essay... and I especially don’t want to use a pseudonym. I’ve never even considered doing so in the past, and I’ve published many things that have required courage. I believe in authenticity and transparency. But I’m worried about our governor’s willingness to punish those who even consider opposing him... regardless of who else might be negatively impacted. I can live with the professional and personal backlash. I can accept that these words might be grounds for my termination. Opposing — and actively resisting — this law is worth getting fired over.

But I’m worried about the scrutiny it will bring my colleagues and about budget cuts to my university or to the humanities in general. DeSantis has already proven he doesn’t care if students suffer as casualties in political warfare. And students will suffer from budget cuts.

Still, I can’t be silent. I can’t be objective about how the history of the United States is inextricably linked with genocide, slavery, white supremacy and sexism, to name a few of our country’s ills. And I cannot be “objective” of claims that say that history does not still haunt us now and that groups of people are not privileged or oppressed based on systems that were set up centuries before.

This is patently false, and Gov. DeSantis knows it. He majored in history at Yale University. He is not acting out of ignorance. He is acting for political gain. He is willfully disregarding marginalized communities and attempting to sentence them to a future as fraught as the past. He is only governing a percentage of the citizens in this state where he took an oath to serve us all.

He is also underestimating Florida’s young people. Even if educators agreed to be silenced — if we stopped assigning and discussing material that “espouses, promotes, advances, inculcates or compels” students to recognize privilege and if, out of fear, we claim to be “objective” about racism and other forms of oppression and their sources — our students are already aware of the problems so many face here. They live, work, study and learn beside each other in some of the most diverse campuses in the United States. More than a few of our universities have undergraduate populations where nearly half belong to an ethnic minority group.

And when those students enter my classroom? For those who might not be aware of the America that exists for so many, they’ll learn about it... and I won’t pretend to be “objective” about oppression and privilege. I would never tell a student they are “responsible” for actions “committed in the past by other members of the same race,” or tell them they’re guilty of actions that occurred before they were even born. Of course, they’re not. But we are responsible for recognizing how we contribute to this system and understanding who benefits from it. We have to face it — and ourselves — before we can all commit to working for change.

And for the student who has trusted us with her story? I won’t tell her that her experiences aren’t valid or attempt to sell her on an image of America that has never existed. Even if I wanted to tell her that oppression is just a “theory,” she wouldn’t believe it, anyway. She lives it.

This is not indoctrination. It’s education.

As long as I’m allowed in a classroom, I’ll do my job.

I wish Gov. DeSantis would do the same.

Beth L. Matterson is a pseudonym for a college instructor and writer in Florida. Matterson writes poetry, memoir and occasionally fiction. She would much prefer hanging out with her dog than writing an essay like this, but she notes, “I lose sleep when I consider an America where so many are silenced, and we become more concerned with one’s comfort than one’s learning.”