And that number is about to be even higher as states rush to pass new bans and move restrictions out of legal limbo. 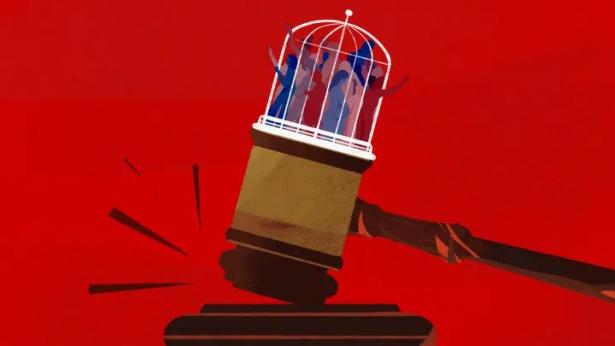 In the two months since the Supreme Court overturned Roe v. Wade, more than a dozen states have banned or severely restricted access to abortion ― leaving millions of people without critical health care.

That means that of the 75 million American women of reproductive age, nearly 30 million have limited or no access to abortion, according to the Guttmacher Institute, a pro-abortion rights research organization. Around 17 million of those women live in states where lawmakers have either completely banned abortion care or providers have stopped offering it due to uncertainty around abortion laws. These numbers only increase when including transgender, nonbinary and genderqueer people who are able to get pregnant.

“These bans mean that every one of these millions of people, should they need an abortion, will have to overcome extreme logistical and financial barriers to access care,” Elizabeth Nash, a principal policy associate at the Guttmacher Institute, said in a recent statement. “Abortion is an essential component of reproductive health care that was already difficult to achieve pre-Dobbs, but is now even more challenging or outright impossible for many.”

Eleven states are currently enforcing near-total abortion bans: Alabama, Arkansas, Kentucky, Idaho, Louisiana, Tennessee, Texas, Mississippi, Oklahoma, South Dakota and Missouri. Some of these near-total bans were implemented through trigger laws, while others went into effect through pre-Roe restrictions that immediately took effect after the Dobbs decision came down in June.

All of the near-total bans have extremely limited exceptions. Some, like Tennessee’s and South Dakota’s, have no exceptions for rape or incest, and those that do require victims to report to law enforcement before they can access abortion care. All of the abortion bans have exceptions to save the life of a pregnant person, but many of those exceptions, like those in Missouri and Texas, are intentionally vague and create a powerful incentive for physicians not to provide lifesaving care until the pregnant person is at death’s door, for fear of consequences like losing their license or facing lawsuits and criminal penalties.

Other states are enforcing abortion restrictions in the wake of Roe’s demise. These include Georgia and Ohio, which each have a six-week ban; Florida, which has a 15-week ban; Utah, which has an 18-week ban; and North Carolina, which has a 20-week ban. And in Wisconsin, physicians have stopped providing abortions because it’s unclear if a pre-Roe abortion ban is in effect. Georgia is the only state that has an exception for rape or incest, but requires victims to report the assault to law enforcement before accessing an abortion. 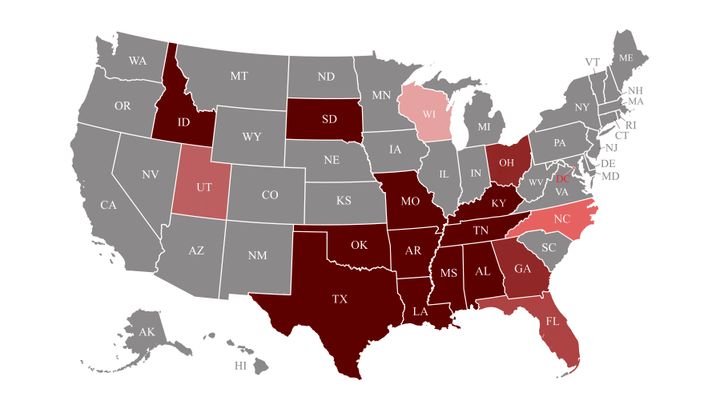 Florida’s and North Carolina’s restrictions are less severe than those in many other states, but they have broader implications for the region. Florida and North Carolina both border states with near-total bans, making them critical access points for people who need to travel out of state for abortion care. Utah’s 18-week abortion restriction is limiting as well, but the state is close to Colorado and New Mexico, where abortion is far more accessible.

The fall of Roe has had far-reaching and devastating consequences. In addition to those who have been forced to carry unwanted pregnancies to term, many patients who have been able to receive care have had to travel far distances and overcome obstacles like getting time off of work and finding child care. Often, those barriers to care push people further into their pregnancies, which can lead to an even more costly medication or procedural abortion.

Some patients, like one woman in Texas, have had to delay their medically necessary abortions until they are hours or even moments from death. Others, like a 10-year-old girl from Ohio, have been forced to travel out of state to receive abortion care after becoming pregnant from rape or incest. In many cases, the physicians who provided lifesaving care were attacked or threatened legally for doing their jobs.

And across the country, surveillance of pregnant people has grown. In Nebraska, for example, Facebook provided law enforcement with social media messages between a teenager and her mother after the two were accused of self-managing an abortion for the teen.

The surveillance and fear of prosecution go way beyond just those with the capacity for pregnancy.

Pharmacists across the country have been reticent to prescribe medications that include or are similar to those used in medication abortion. Heartburn medication was pulled in some Texas pharmacies because of its makeup; some doctors reportedly stopped prescribing methotrexate, a common medication for people with auto-immune diseases like rheumatoid arthritis and Crohn’s disease. Other patients have been wrongly denied their birth control prescriptions or access to emergency contraceptives like Plan B, which are still legal in every state despite the overturn of Roe. Some women have reported pharmacists refusing to fill prescriptions for certain forms of mifepristone (one of the medications included in abortion pills) even though it was prescribed prior to an IUD insertion.

“Two months after the Supreme Court eliminated the federal constitutional right to abortion, nearly a third of this country is without meaningful access to care,” Alexis McGill Johnson, president and CEO of Planned Parenthood Federation of America, said in a statement.

“The people living in these states have fewer rights than those who live where abortion remains legal,” she added. “They have been robbed of their fundamental right to decide what is best for their own bodies, lives, and futures. … There is no way to sugarcoat how dark this time is, and the devastation that is unfolding.”

Abortion access still hangs in the balance in several other states, with some poised to enact restrictions over the next month.

Trigger laws in North Dakota, Utah and Wyoming have been temporarily blocked while litigation moves forward. A near-total abortion ban is making its way through the West Virginia and South Carolina state legislatures, while a near-total abortion ban in Indiana — the first anti-choice legislation to pass since Roe’s demise — will take effect on Sept. 15. And an anti-abortion measure in Arizona is set to go into effect on Sept. 24, but the state attorney general requested the courts consider an even stricter ban.

Alanna Vagianos is a senior national reporter at HuffPost. She covers gender and politics with a focus on gender-based violence and reproductive justice