The Roots of Poverty 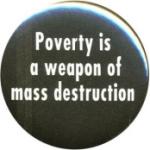 Fifty years ago, black and white college students active with the Civil Rights Movement undertook freedom sojourns in rural communities of the deep South. For many of us, our starkest and most enduring memories of that intense time are not of KKK violence, mass protests or filthy jail cells but rather images of devastating, intractable, systemic poverty. In 2005, TV images of Katrina's aftermath forcefully reminded us once again that beneath America's celebrated affluence lie rural and urban wastelands of abysmal poverty and human degradation.
Through the mass media, we're presented with two opposing views of poverty's root causes:
To oversimplify, and in a sense caricaturize, the view of the political right is that there are two kinds of poor folk:
Again to oversimplify, the liberal view is that in most cases the root cause of long-term poverty is lack of opportunity. Inadequate education, lack of job training, no child care, inadequate public transportation, no jobs available, or jobs denied because of race, gender, or some other form of discrimination. And therefore the corresponding solution is to supply opportunity by ending discrimination, providing education, training, child care, transportation and investing public and private funds to create new jobs.
I and many other civil rights workers initially held the liberal view. But once involved in the Freedom Movement we quickly learned that while discrimination and lack of opportunity are certainly important factors, lack of political power (broadly defined) is a deeper, and more fundamental root cause of systemic poverty. In this context, "political power" refers to the ability to change (or maintain) some economic aspect of society. This kind of political power can be expressed via elections, lobbying, economic action (boycotts, strikes and mutual aid), and all the varied tactics of nonviolent direct action.
Year after year, anti-union laws and rulings cripple the ability of workers to earn a living wage while pro-business legislation and government policies encourage and subsidize the outsourcing and offshoring of jobs in a race to the bottom of lower and lower labor costs. Housing and urban renewal policies result in the poor paying greater portions of their income for substandard housing than the affluent do for luxury accommodations. Political disinvestment in education, public works, transportation, and public health disproportionately impact the poor to their detriment. Despite rhetoric about "family farms," federal agriculture policies and subsidies enrich corporate agribusiness and impoverish small subsistence farmers. And business and consumer laws are written to favor corporate profits at the expense of those at the bottom of the economic pyramid.
The result is that most poor people have productive jobs -- often multiple jobs -- and they are working longer and longer hours, but they remain mired in permanent poverty. This is not caused by lack of opportunity alone, it's also caused by lack of power to change the systems, policies, and practices that create and continually recreate poverty.
In essence, the liberal "lack of opportunity" view was the intellectual foundation that underlay the federal "War on Poverty" programs of the 1960s. Empowering poor people was not included in those programs and if people in the field made any effort in that direction they were immediately reined in by the powers that be.
Such was the case with the Child Development Group of Mississippi (CDGM), one of the earliest and most successful Head Start programs. Among its organizers were a number of Freedom Movement veterans who favored training and hiring actual poor people to staff the centers (as opposed to professional educators with college degrees). They organized poor parents to take active decision-making roles in both the education of their children and broader community affairs. The CDGM came under immediate and intense political attack from the Mississippi power-structure led by Senator Stennis who accused it of being "Communist" -- not because the alphabet blocks the children played with could be used to spell "red," but because it was empowering poor people to exert some influence and control over their own lives. Bowing to political pressure, Washington soon defunded CDGM, replacing it with a program where middle-class professionals provided services to the poor who were expected to consume and accept what was given to them as passive clients.
Dr. King understood this relationship between poverty and political power. In a lecture shortly before his assassination he said:

"The dispossessed of this nation -- the poor, both white and Negro -- live in a cruelly unjust society. They must organize a revolution against that injustice, not against the lives of the persons who are their fellow citizens, but against the structures through which the society is refusing to take means which have been called for, and which are at hand, to lift the load of poverty." (The Trumpet of Conscience, Beacon Press)

That was the underlying vision of his Poor People's Campaign, to build a national, multi-racial alliance of poor people to fight on their own behalf. Not to plead for more charity or welfare, but to demand and win economic justice.
[Bruce Hartford is webspinner of the Civil Rights Movement Veterans website (http://crmvet.org). During the 1960s, he was a civil rights worker in Alabama and Mississippi for Dr. King's Southern Christian Leadership Conference (SCLC). Later he was a student activist with SDS at San Francisco State College, and then a freelance journalist covering military affairs during the Vietnam War era. For the past 34 years, Bruce has been a technical writer for Silicon Valley software firms.
"Sojourner's Blog" by Bruce Hartford can be found at: ohfreedom.wordpress.com]
Source URL: https://portside.org/2013-02-14/roots-poverty