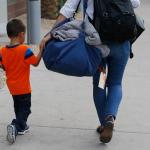 Too Hard To Reunite Thousands Of Separated Families

It referred to the process of reuniting separated families as a “burden.”

On Friday, officials from the Trump administration said it would require too much effort to reunite the thousands of families it separated before implementing its “zero-tolerance” policy in April, according to a declaration filed as part of an ongoing lawsuit between the American Civil Liberties Union and U.S. Immigration and Customs Enforcement.

Last month, the inspector general of the Department of Health and Human Services released a report stating that “thousands” more immigrant families had been separated than the government had previously disclosed. In the declaration submitted Friday, HHS officials said they don’t know the exact number of children who were taken from their parents before “zero tolerance” and that finding them would be too much of a “burden” since there was no formal tracking system in place.

“The Trump administration’s response is a shocking concession that it can’t easily find thousands of children it ripped from parents and doesn’t even think it’s worth the time to locate each of them,” said Lee Gelernt, the lead lawyer in the ACLU’s ongoing lawsuit against ICE, in a statement. “The administration also doesn’t dispute that separations are ongoing in significant numbers.”

HHS did not respond to HuffPost’s request for comment.

The deputy director of the Office of Refugee Resettlement, Jallyn Sualog, said that 100 ORR analysts would have to work eight hours each day for between seven and 15 months to “even begin reconciling” data on separated families. “In my judgment, ORR does not have the requisite staff for such a project,” Sualog wrote in the declaration.

Immigration advocates are appalled by the fact that the government didn’t bother to properly track separated families and that it is now shirking its responsibility to reunite parents and children.

They are saying they just don’t care. It’s shocking from a human rights perspective for a government to behave this way.
Michelle Brané, the director of the Migrant Rights and Justice Program at the Women’s Refugee Commission

“They are saying they just don’t care,” said Michelle Brané, the director of the Migrant Rights and Justice Program at the Women’s Refugee Commission. “It’s shocking from a human rights perspective for a government to behave this way.”

“I think the policy of taking the children away in the first place was cruel,” said Gelernt, the ACLU lawyer, “but to not even have a system to return the parents to the children just increases the magnitude of the cruelty.”

The government also failed to properly track the roughly 2,800 children that it separated from their parents under the “zero-tolerance” policy between April and June. The administration was required to reunite families as part of an ACLU lawsuit, an ongoing process that has at times required immigration advocates to search for deported parents on foot in remote, crime-ridden areas of Central America.

According to the inspector general’s report, 159 children who were separated under “zero tolerance” are still in ORR care, most of whose parents were deported and decided to keep their kids in the U.S. due to dangerous situations back home. If the government doesn’t allow those parents to re-apply for asylum in the U.S., families may remain permanently separated. Gelernt worries that before “zero tolerance” the government could have deported hundreds more parents who might not have had a say in their children’s futures.

In the declaration, Jonathan White, a commander with the U.S. Public Health Service Commissioned Corps, said that most unaccompanied children are released to family sponsors and that in addition to logistical challenges, trying to reunite separated kids with their parents could be destabilizing and “would present grave child welfare concerns.”

On Feb. 21, Gelernt will argue in front of a federal judge in California that all families separated before “zero tolerance” should be part of the ACLU’s ongoing lawsuit and that the government has a responsibility to reunify these parents with their children. He is disappointed that the administration failed to act humanely towards immigrant families in its declaration.

“The [government] is saying it’s not legally required for them to [reunite families] and therefore they won’t do it,” he said. “But why not do it because it’s the right thing to do?”

[Angelina Chapin is a HuffPost reporter. She's also written for The Guardian and New York magazine.]

The Trump administration says it can’t reunite missing migrant children with their families; instead, many of the children are being shipped to a Christian adoption agency with ties to Education Secretary Betsy DeVos.

Earlier this week the Trump administration told a federal court that it would require too much effort to reunite migrant children with their parents. Associated Press reports:

The Trump administration says it would require extraordinary effort to reunite what may be thousands of migrant children who have been separated from their parents and, even if it could, the children would likely be emotionally harmed.

According to the Associated Press report, the Trump administration is also concerned that reunification would “present grave child welfare concerns” because the children would be removed from their “sponsor” homes:

Jonathan White, who leads the Health and Human Services Department’s efforts to reunite migrant children with their parents, said removing children from ‘sponsor’ homes to rejoin their parents ‘would present grave child welfare concerns.’ He said the government should focus on reuniting children currently in its custody, not those who have already been released to sponsor homes.

The entire situation is horrific. Commenting on the horror, and expressing the feelings of many, Oregon Senator Jeff Merkley tweeted: 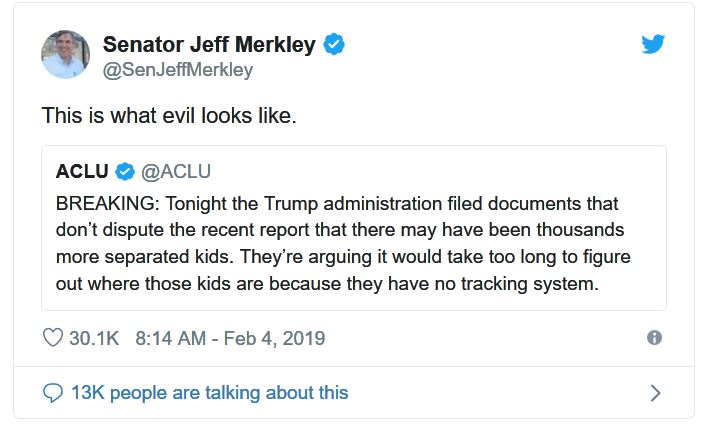 As for the fate of the thousands of children the Trump administration does not want to reunite with their parents, Progressive Secular Humanist previously reported that many of the migrant children ruthlessly separated from their family by the Trump administration are being shipped to Bethany Christian Services, a Christian adoption agency with ties to the family of Education Secretary Betsy DeVos.

Last year Rewire News reported on the condition of some of those children separated from their parents, linking the migrant children to Bethany Christian Services:

Migrant children in Michigan who have been separated from their parents by the Trump administration are attending “a special school” run by Bethany Christian Services, an anti-choice organization with a record of coercive adoption practices that has yet to receive instructions about how to reunify these children with their detained parents.

The links between the extended DeVos family and Bethany are undeniable. Tax filings archived by ProPublica show that between 2001 and 2015, the Dick and Betsy DeVos Foundation (the philanthropic organization run by DeVos and her husband) gave $343,000 in grants to Bethany Christian Services.

Between 2012 and 2015, Bethany received $750,000 in grants from the Richard and Helen DeVos Foundation, which is run by the Education Secretary’s father-in-law, the billionaire founder of Amway Richard DeVos, and his wife Helen.

Furthermore, Brian DeVos — a cousin of Betsy DeVos’s husband Dick — was the Senior Vice President for Child and Family Services at Bethany as recently as 2015, and Maria DeVos — who is married to Dick DeVos’s brother Doug — has served on the board of Bethany.

They have no intention of trying to find, much less uniting parents with their children. It’s a radical Christian adoption trafficking mill.

In fact, there is already in place a huge and thriving business in the trafficking of children via Christian adoption agencies like the DeVos connected Bethany. In her 2013 book, The Child Catchers: Rescue, Trafficking, and the New Gospel of Adoption, Kathryn Joyce documents this alarming trend of conservative Christians adopting children removed from their natural parents via nefarious means to feed the business of Christian adoption and serve the agenda of Christian theocracy.

Bottom line: The Trump administration says it can’t reunite missing migrant children with their families; instead, many of the children are being funneled through Christian adoption trafficking mills like the DeVos connected Bethany Christian Services.

To repeat Senator Merkley: This is what evil looks like.