New Human Species Is Discovered in the Philippines 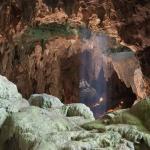 Standing an estimated three to four feet tall, Homo luzonensis—classified as a separate species on the basis of 13 bones and teeth from two adults and one child found in a cave on the island of Luzon in the Philippines—adds another twist to the increasingly complex timeline of human evolution. Some 50,000 to 67,000 years ago, the diminutive hominin roamed Earth alongside a host of other early humans, including Neanderthals, Denisovans, similarly petite Homo floresiensis, and our own species, Homo sapiens.

As paleoanthropologist Rick Potts, director of the Smithsonian Institution’s Human Origins Program, tells the Washington Post’s Ben Guarino, “The evolution of our evolutionary group, Homo, is getting weirder and weirder.”

Homo luzonensis, described this week in the journal Nature, boasted an eclectic mix of features comparable to different species of hominins. Unlike Homo sapiens, whose premolar teeth generally have a single root, Homo luzonensis' premolars had two or three roots, similar to more primitive species such as Homo erectus, which lived in Africa and Asia between about 1.89 million and 143,000 years ago. The species' molars were “incredibly small” with single roots, Lizzie Wade reports for Science magazine—even smaller than those of Homo floresiensis, a hominin species discovered on the Indonesian island of Flores in 2003 and given the nickname "Hobbit" for its tiny size.

Given that tooth size is generally indicative of body size, it’s likely Homo luzonensis was smaller than Homo sapiens, and perhaps even smaller than Homo floresiensis, as the study's lead author Florent Détroit, a paleoanthropologist at Paris’ Museum of Man, explains to Wade.

Still, Détroit tells Reuters’ Will Dunham, “We have to stay cautious about it, especially because people will immediately have Homo floresiensis in mind as a ‘model’ for the physical appearance of Homo luzonensis, which was certainly not the case.”

A clear difference between the newly discovered species and most members of the Homo genus is Homo luzonensis’ curved finger and toe bones, reports NPR's Christopher Joyce. The digits closely resemble those of Australopithecus, a group of “tree-climbing, ape-like creature[s]” that populated the planet as early as several million years before the advent of Homo erectus, Earth’s first known hominin to migrate out of Africa.

As Michael Greshko and Maya Wei-Haas write for National Geographic, Homo erectus likely used land bridges to reach what is now Indonesia around a million years ago. Previously, most researchers believed it would have been impossible for early hominins to venture farther east without boats, but the discovery of Homo floresiensis and Homo luzonensis suggests our ancient relatives were better-traveled than once thought.

Susan Anton, a New York University anthropologist who was not involved in the new research, tells the Post’s Guarino that early hominins may have arrived on distant islands, including Luzon, during tsunamis and major weather events. Anton explains that waves could have swept these individuals, clinging onto debris in an instinctual attempt to survive, to “places that they maybe shouldn’t be.”

Members of Homo floresiensis are thought to have evolved from an early hominin, perhaps Homo erectus, developing their small stature only after landing on isolated islands—and the same could be true for Homo luzonensis, Kiona N. Smith reports for Ars Technica.

It’s also possible that Homo luzonensis descended from a Homo lineage other than Homo erectus. Matthew Tocheri, an anthropologist at Lakehead University who wrote a Nature News and Views piece accompanying the study, tells Smith that Homo luzonensis and Homo floresiensis could just as easily be descendants of another Homo species that left Africa around the same time as Homo erectus.

The hominins' curved finger and toe bones are similar to those of tree-climbing, ape-like Australopithecus species (Callao Cave Archaeology Project)

The two toe bones, two finger bones, seven teeth, femur shaft and foot bone unearthed in Luzon offer only scant evidence of the two adults and one child whose remains they represent. Although the authors of the Nature study found that the fragments are distinct enough to warrant their classification as an entirely new species, others remain unconvinced—particularly because the team was unable to extract DNA from the bones and teeth, which have spent millennia in the humid confines of Luzon Island’s Callao Cave. One alternative explanation for the unusual bones, according to Science’s Wade, is that the remains belong to a “locally adapted population” of Homo erectus or a similar early hominin.

“I see what they’re saying, but at the same time, I want more,” Anton explains to Science's Wade, adding that the discovery of a skull bone or intact DNA could further solidify the scientists’ conclusions.

Aida Gómez-Robles, a paleoanthropologist at University College London who reviewed the study prior to publication, tells National Geographic’s Greshko and Wei-Haas the research is “absolutely one of the most important findings that [will] be out in a number of years.” Regardless of whether Homo luzonensis is widely accepted as a wholly separate lineage, the results testify to the diversity of early hominin species.

As Tocheri concludes to The New York Times’ Carl Zimmer, “The more fossils that people pull out of the ground, the more we realize that the variation that was present in the past far exceeds what we see in us today.”

Meilan Solly is a Washington, D.C.-based arts and science journalist. She has previously served as Smithsonian's American Society of Magazine Editors intern and a Kiplinger.com editorial intern.
meilansolly.com | More from this author | @meilansolly