https://portside.org/2019-05-24/indictment-julian-assange-under-espionage-act-threat-press-and-american-people
Portside Date: May 24, 2019
Author: James Risen
Date of source: May 24, 2019
The Intercept 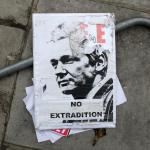 A TRUE DEMOCRACY does not allow its government to decide who is a journalist. A nation in which a leader gets to make that decision is on the road to dictatorship.

That is why the new U.S. indictment of Julian Assange is so dangerous to liberty in America.

Many of those documents, including U.S. military reports and State Department cables, were later published by WikiLeaks, but they were also the basis of reporting by major news organizations like the New York Times and The Guardian, which published some of them. The Manning leaks helped reveal long-hidden truths about the wars in Iraq and Afghanistan and the post-9/11 global war on terror. Among the most striking leaks were a classified video of U.S. military attack helicopters killing a dozen people, including two Reuters staffers, in Baghdad in 2007, as well as the more than 250,000 State Department cables, which continue to be an important reference for reporters and researchers studying U.S. foreign policy.

The Manning documents also turned WikiLeaks into a strange new player in the modern journalistic ecosystem. WikiLeaks would obtain materials from sources inside governments and other organizations and then disseminate them, either by publishing them itself or by sharing them with major news organizations. WikiLeaks served as an intermediary between sources and reporters.

Does that make Assange, its founder, a journalist? A debate over that question has raged ever since and has never been resolved.

Journalists don’t want the government to settle this question — and Americans shouldn’t either. If the government gets to decide what constitutes journalism, what’s to stop it from making similar rulings about any outlet whose coverage it doesn’t like?

THE INDICTMENT SAYS that Assange and WikiLeaks “repeatedly sought, obtained, and disseminated information that the United States classified due to the serious risk that unauthorized disclosure could harm the national security of the United States.”

That is almost a textbook definition of the job of a reporter covering national security at a major news organization. Take a look at the tipspages of most news outlets, and you’ll see a remarkable similarity between what journalists ask for and what WikiLeaks sought.

The indictment goes on to say that “WikiLeaks’s website explicitly solicited censored, otherwise restricted, and until September 2010, ‘classified’ materials.” Today, virtually every major news organization has a similar secure drop box where sources can provide information anonymously. WikiLeaks popularized that technique for soliciting anonymous leaks, but it is now common journalistic practice.

“Assange personally and publicly promoted WikiLeaks to encourage those with access to protected information, including classified information, to provide it to WikiLeaks for public disclosure,” the indictment says. Nearly every national security reporter goes on television, gives speeches, or launches book tours to promote their work and hopefully obtain new sources.

All of this raises an obvious question: If the government can charge Assange for conspiring to obtain leaked documents, what would stop it from charging the CIA beat reporter at the New York Times for committing the same crime?

THE OBAMA ADMINISTRATION began the government’s investigation of Assange and WikiLeaks over the Manning leaks, but the issue of how to distinguish between WikiLeaks and the rest of the media is generally thought to have given them pause.

The Trump administration has no such qualms. President Donald Trump sees the media as the enemy of the people; charging Assange opens the door for his Justice Department to go after the rest of the press corps.

The great irony, of course, is that Trump publicly declared his love for WikiLeaks during the 2016 presidential campaign, when WikiLeaks acted as a kind of intermediary between shadowy front entities put up by Russian intelligence and the U.S. media in the distribution of hacked emails and other documents from the Hillary Clinton campaign and the Democratic Party.

Whether WikiLeaks and Assange knew they were getting the materials at least indirectly from Russian intelligence is still an open question. But there is no doubt that the New York Times, The Intercept, and other major media organizations largely ignored their provenance and instead lapped up the leaked materials and published them in the midst of the 2016 campaign.

The results were very good for Trump.

But the government’s case against Assange has nothing to do with his role in laundering documents stolen by Russian spies to help Trump win the 2016 election. Instead, it focuses on his earlier work, which brought new light to the dark corners of the war on terror.

The selective nature of the charges against Assange underscores the fact that this is a highly politicized case brought by a Justice Department now run by Trump lackey William Barr. Even as it pursues Assange for his role in producing groundbreaking journalism, Trump’s Justice Department is ignoring the one known instance when Assange actually worked, perhaps unwittingly, with a foreign intelligence service.

But given that exploring said angle would raise new questions about alleged links between Trump and Russia, it is exceedingly unlikely that this Justice Department would choose to go down that road. Instead, it’s going after the publication of classified documents that helped educate Americans about the conduct of their own government. All journalists — and all Americans— should be deeply worried about that.

Risen also serves as director of First Look Media’s Press Freedom Defense Fund, which is dedicated to supporting news organizations, journalists, and whistleblowers in legal fights in which a substantial public interest, freedom of the press, or related human or civil right is at stake.

Risen was himself a target of the U.S. government’s crackdown on journalists and whistleblowers. He waged a seven-year battle, risking jail, after the Bush administration and later the Obama administration sought to force him to testify and reveal his confidential sources in a leak investigation. Risen never gave in, and the government finally backed down.

The Intercept depends on the support of readers to help keep its nonprofit newsroom strong and independent. Join.