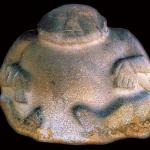 Magnets are a mystery that has baffled scientists and philosophers for millennia, and researchers still don’t fully understand the properties that give magnetic fields their potency. Ancient Greek legend held that a shepherd named Magnes first discovered the curious force when a stone pulled at his iron staff in an area of Greece then known as Magnesia.

Whether or not Magnes the shepherd actually existed, he wasn’t the only ancient human to notice the funny characteristics of certain types of stone. The first culture to become aware of magnetic material is a matter of open debate, but new evidence suggests ancient cultures in the Americas had knowledge of magnetic forces long before the first pocket compasses.

The ancient Monte Alto people of Mesoamerica, for example, used stone that had been magnetized when struck by lightning to build giant heads and potbellied sculptures centuries before the rise of the great Maya civilizations. A new study published in the Journal of Archaeological Science suggests this civilization, which flourished in present-day Guatemala around 500 B.C. to 100 B.C., must have had some way to detect the relative strength of the magnetized stones.

“It’s a fascinating subject for me. It’s one of these things that we would never think about, but we need to start asking these questions,” says Oswaldo Chinchilla, an associate professor of anthropology at Yale University and coauthor of study. He and colleagues note that the Greek philosopher Thales of Miletus described the attraction of a magnetic lodestone to fragments of iron in the sixth century B.C., but while Thales speculated about the nature of magnetic force, a number of other cultures had likely taken note of magnetism as well. “It’s something that people had noticed and sometimes measured from very ancient times.” 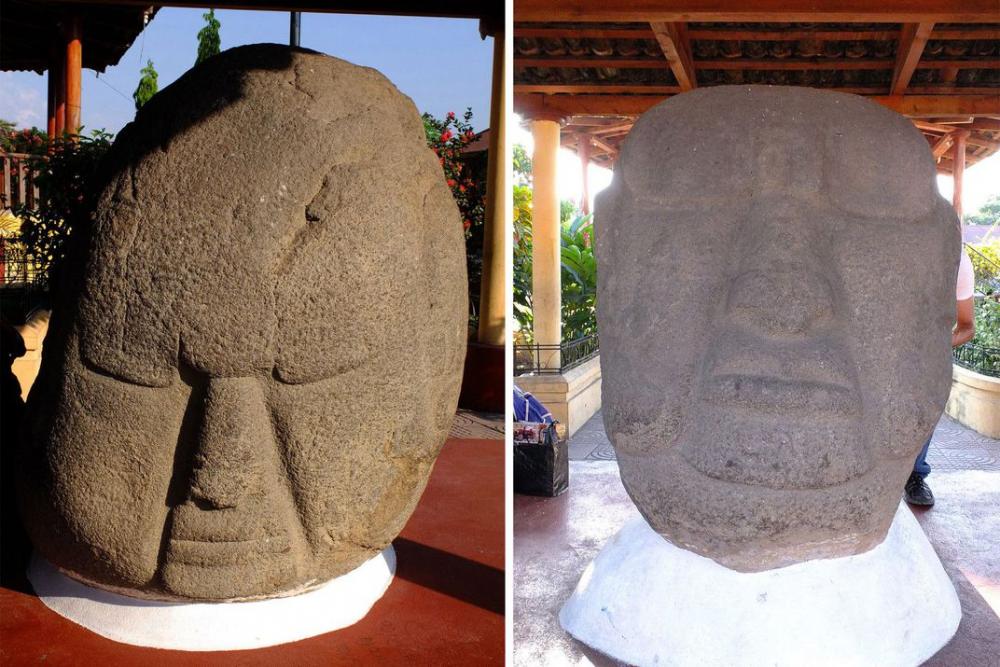 The people of Monte Alto carved large stone heads in addition to potbellied sculptures, many of which are strongly magnetized, suggesting the 2,000-year-old culture was aware of magnetism. (Roger Fu)

The people of Monte Alto lived in large communities and built pyramids and other structures—the largest reaching about 65 feet tall. Temples and compounds for the elite class dominated the city near the Pacific coast, while the community subsisted on crops from surrounding agriculture.

The Monte Alto culture is known in particular for their sculptures, which include the potbellied figures as well as giant heads that resemble sculptures of the Olmec civilization, which predates and coincides with Monte Alto. Chinchilla says it’s difficult to know how the people of Monte Alto related to their neighbors, as we don’t know what type of language they spoke, whether something similar to the Olmec language, a Mixe-Zoque tongue related to the Mixtecs or an early type of Maya language.

“It was almost a super highway of information, cultural contact and exchange up and down the Pacific coast,” says Elizabeth Paris, an assistant professor of Mesoamerican archaeology at the University of Calgary in Canada who was not involved in the study.

The people of Monte Alto didn’t live in isolation. Though Chinchilla says the sculptures at Monte Alto are the “most impressive,” several potbellied sculptures were found distributed around the coastal region of what is today Guatemala, El Salvador and the Mexican state of Chiapas, suggesting the Monte Alto influenced other cultures in the region.

At least some of the stones used to craft sculptures were hit by lightning at some point in the past, magnetizing the material, according to the research conducted on 11 basalt figures. Moreover, the potbellied sculptures were carved in such a way that protruding features had the strongest magnetic forces, suggesting the artisans knew which parts of the material were most magnetic.

Chinchilla’s coauthor Roger Fu from Harvard’s Department of Earth and Planetary Sciences tested the sculptures by first running a magnetometer over them and mapping out the areas with the strongest anomalies. Then the team chose four sculptures and ran further tests using a larger, more sensitive instrument.

“[The people of Monte Alto] chose the boulders, and they shaped them in such a way that the magnetism would be measurable at certain points of the anatomy of the sculptures,” Chinchilla says.

“The ancient people of Monte Alto were perhaps seeking out these basalt boulders that had these magnetic properties,” Paris says, adding that they could have also been effectively using a type of primitive compass in their searches. 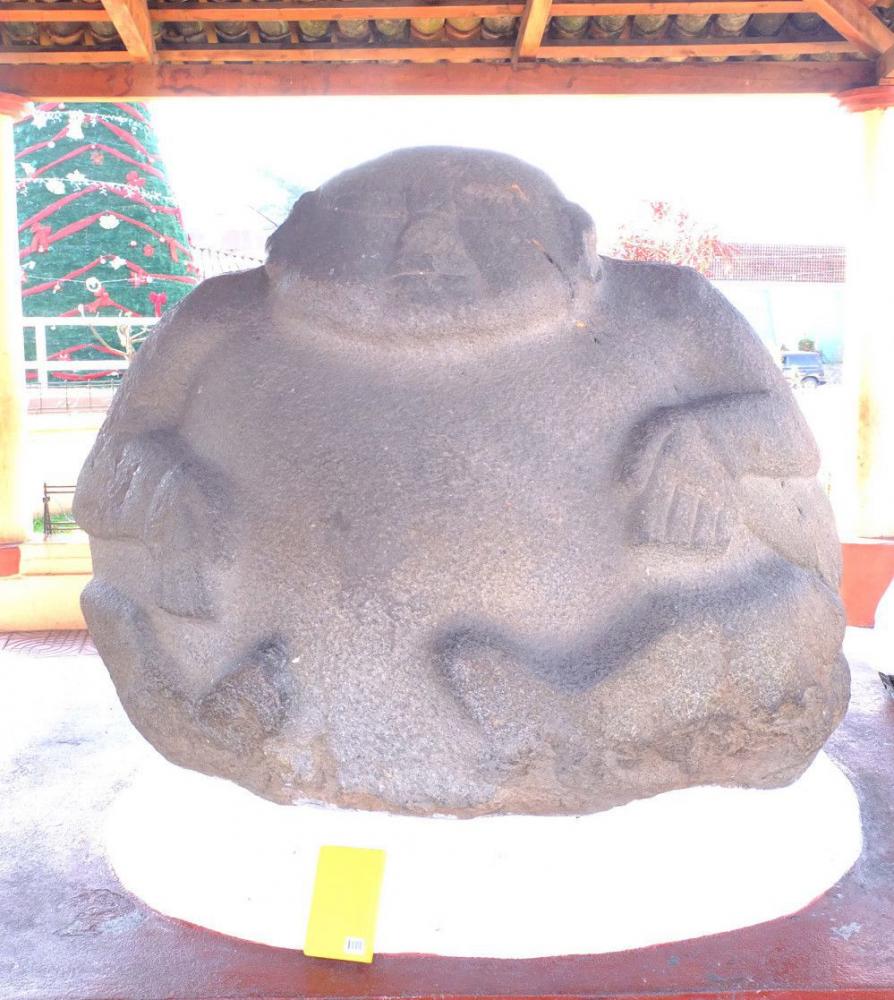 On the potbellied sculptures, the navels were shown to have the strongest magnetic attraction. (Roger Fu)

The artists who carved these sculptures may have used lodestones, or chunks of naturally occurring magnetic minerals, to locate the lightening-struck basaltic rocks. The lodestones could have been magnetite or hematite, materials used by Mesoamericans to make mirrors.

“The interesting thing is how they did this, and how they detected this magnetism,” says Merle Walker, a professor emeritus of astronomy at the University of California’s Lick Observatory who was not involved in the new research. Walker believes there may be evidence of magnetized needles, perhaps in pouches of shaman material recovered at archaeological sites, but nobody has thought to look for such tools.

Earlier research that Walker conducted in California found the indigenous people who lived there possibly detected magnetic properties in a boulder and incorporated these magnetized areas into petroglyph drawings on the stone roughly 500 years ago. “My idea was that somehow some of the medicine men may have acquired [loadstones] and could have used them suspended on string or floated in water to detect the anomalies of rocks,” he says.

Chinchilla isn’t sure why the Monte Alto sculptors incorporated magnetized rock into their work, but he says the carvings are probably not portraits of individual rulers since they all share similar features—naked figures with one hand resting on their bellies. Instead, the potbellied sculptures may represent the dead due to their swollen proportions, possibly created to honor ancestors and former community members.

Fu says that if this were the case, the sculptors or the people who commissioned them may have exploited the magnetic properties to reinforce political control over the population. “The ability of these sculptures to deflect a compass in real time would have looked very impressive to an audience, giving the illusion of persisting life in these objects,” he says in an email.

Central American cultures like the Monte Alto people also traded with what is now the Southwestern United States. The knowledge of magnetism, or even tools to detect magnetic anomalies, may have been transferred between these areas along with other goods. Objects like lodestones, which had exotic properties, would have been particularly valued in trade.

Knowledge of magnetism could have even predated the Monte Alto culture, Chinchilla says. Archaeologists discovered a magnetized bar rich in hematite dating from 1400 B.C. to 1000 B.C. at San Lorenzo in the present-day Mexican state of Veracruz, one of the major cities of the Olmec. If this bar was somehow used as a magnetic tool, it would mean that Mesoamerican knowledge of magnetic forces predates even the early descriptions by Thales of Miletus.

Paris says that this Monte Alto discovery may just be scratching the surface, and that similar magnetic testing should be done on Olmec head sculptures as well as Maya artifacts to see whether the knowledge of magnetic forces was widespread among early Mesoamericans.

“There’s a lot more work to be done now that we can start to recognize this pattern,” she says.

Joshua Rapp Learn is a D.C.-based journalist who writes about science, culture and the environment. He has crossed the Sahara Desert, floated down the Amazon River and explored in more than 50 countries.

Smithsonian magazine and Smithsonian.com place a Smithsonian lens on the world, looking at the topics and subject matters researched, studied and exhibited by the Smithsonian Institution -- science, history, art, popular culture and innovation -- and chronicling them every day for our diverse readership.

The Smithsonian Institution is the world’s largest museum, education, and research complex, with 19 museums and the National Zoo—shaping the future by preserving our heritage, discovering new knowledge, and sharing our resources with the world.