Will Millennials Come Back to Labor? 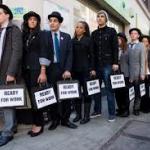 As we approach International Workers Day, also known as May Day, it's hard not to wonder about the future of the labor movement, and whether or not young people in the United States will wake up and see that joining labor unions could be a part of the solution to the nation's 22.9 percent youth unemployment rate.

Somewhere between the hate propaganda promoting the "dangers" of joining labor unions (including bringing us a weekend and the 40-hour work week), and outsourcing millions of jobs overseas, the millennial generation has been raised to turn our backs on labor, and pray for a job at Google where we might be able to get fair working standards like a free bowl of Cap'n Crunch or a bike share program.

Lets face it. The average millennial will have seven jobs before they turn 26, if they can find a job at all. Perhaps that reason why millennials switch jobs so frequently is because we are unhappy with the benefits, treatment and lack of respect due to our age in the workplace. Something needs to change, and it could start with a massive movement of currently employed young people joining labor unions.

Imagine a young teacher joining the American Federation for Teachers, and increasing their income to pay off their $22,000 student loan debt, or a young garbage woman joining the American Federation for State County and Municipal Employees and earning more paid vacation days to spend time with family or friends. If our generation stands together, and demands fair working practices, we would not only be setting our selves up for future economic success, but we would be setting up success for future generations.

Lets not get it twisted, labor needs us, as much as we need them. As the labor movement clings to their aging membership, they know they have a lot to change. They just caught up with the rest of us by utilizing technology to organize our generation, and we definitely need to see more people of color, women, low-income folks, and lesbian, gay, bisexual, transgender and queer people as the face of some of the most powerful unions.

But we have a choice: continue being sad about being underemployed or straight up hating our jobs, or we can change the status quo.

What if our generation redefines what it means to have a union job? What if labor took on more progressive issues that millennials care about? What if we encouraged our colleagues to sign the cards and be a part of an institution that has power in the statehouse and the White House? What if we changed the face of labor?