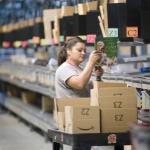 Whenever he clocked out after his 12-hour shift at an Amazon warehouse, Jesse Busk had one more critical task to perform before he could hop into his car and head home to sleep: Pass through the sprawling warehouse security checkpoint.

The purpose of the checkpoint was to prevent workers like Busk from pilfering electronics or other pricey goods from the Amazon stock. The process deeply annoyed Busk, but not because of any indignity he may have felt in being checked for contraband. What bothered him was the time it required after an exhausting day -- up to 25 minutes, all of it unpaid.

"You're just standing there, and everyone wants to get home," said the 36-year-old Busk, who lives in Nevada. "It was not comfortable. There could be hundreds of people waiting at the end of the shift."

Busk, along with Laurie Castro, is a lead plaintiff in a class-action lawsuit that reflects much of the labor discontent in the booming American warehouse business. From 2009 into 2010, Busk was employed as a product "picker" by Integrity Staffing Solutions, a temp agency that supplies workers to the massive online retailer, particularly during the busy holiday season. Busk and a colleague have sued Integrity for back wages, claiming they weren't paid for all the time they actually spent working. Amazon itself is not named in the suit.

A recent appeals court ruling in the case could have broad implications for workers in Amazon warehouses and beyond. In 2011, a federal court in Nevada tossed out Busk and Castro's claim that they're owed money for time spent waiting on the security line, but last month a federal appeals panel reversed that portion of the decision. Their lawyers now say there are thousands of workers eligible to join the suit.

Integrity did not respond to interview requests. An Amazon spokeswoman said the company would not comment.

Mark Thierman, one of the Nevada lawyers representing Busk and Castro, told HuffPost that his clients' claims represent "an utter lack of respect for workers' time" by Integrity and ultimately Amazon.

"From what we've been able to find, this is across the country," Thierman said. "It's not just Nevada. It's Pennsylvania, Tennessee, Kentucky, Delaware. They all have the same setup."

Workers like Busk are the hidden engine of the U.S. retail economy, helping to load and unload shipments at enormous distribution centers for big-box and online sellers. The so-called "logistics" industry has become big business, particularly in transport hubs like the Inland Empire of Southern California and the Joliet area of Illinois, bringing plenty of jobs, but also complaints of unfair labor practices and dead-end positions.

As HuffPost reported in 2011, many warehouse workers are temps, toiling for low pay and no benefits, often at the bottom of a dizzying hierarchy of contractors that blurs the lines of corporate responsibility. Lawsuits, as well as union organizing, have become common in the industry, with workers claiming they're cheated out of pay. Such workers are often employed by small, little-seen firms, even though they move goods for companies like Walmart.

Former Amazon warehouse workers in Pennsylvania, also employed by Integrity, recently told The Morning Call newspaper that they, too, could spend roughly 20 minutes waiting on a security line after clocking out, and that setting off an alarm prompted a time-consuming wanding from a guard. One worker told the paper that some workers stopped wearing belts to the warehouse just to speed the process. In 2011, Morning Call reporter Spencer Soper published a lengthy expose of working conditions at Amazon's Lehigh Valley distribution center, in which temp workers described high productivity expectations, oppressive heat and the false promise of permanent employment.

Busk said that he earned $12.35 an hour working nights, $11.60 days, without health care or paid leave. As a picker, he spent his shift shuttling through the warehouse plucking products off the shelves for shipment to customers. As the months passed, he said the quotas grew more and more demanding. He was eventually laid off in a series of post-holiday staffing cuts for allegedly not picking products fast enough, he said.

"They said, 'You've met all the cuts up to this point, but at this point your quota is in the range where we're going to have to lay you off now,'" Busk said.

In addition to the time spent on security checks, Busk and Castro originally claimed they should be compensated for legally mandated, unpaid break time they spent just trying to cross the warehouse. According to the lawsuit, the facilities they worked at were each the size of seven football fields. On an unpaid lunch break, Busk said he might spend half the time just trying to get to and from the area where workers eat. A judge dismissed that portion of the workers' claim.

But the fact that the staffing firm could be held liable for the time it takes workers to get through post-work security, Thierman said, could be "precedent-setting" for the industry. The argument Thierman has made is that passing through security is a vital part of the job for the benefit of the employer and not the employee.

There have been similar worker lawsuits in other low-wage industries. For years, major meat and poultry processors like Tyson Foods have been fighting lawsuits over the time workers spend putting on and removing elaborate uniforms and equipment, like protective gear and chain mail, which can add a half hour to a worker's day. Known as "donning and doffing" cases, such lawsuits have led to multi-million-dollar payouts in the past.

Workers deserve to be paid for the time they spend waiting on the security line, Busk argued, because it's not by choice -- and because "you drove God knows how far to this place, and you just worked 12 hours."

Busk, who now works as a sign-language interpreter, was originally referred to the Amazon warehouse by someone at his local unemployment office when he couldn't find work. After he was let go in a few months, he was back at the unemployment office.

"It was probably one of the hardest jobs that I've ever had," Busk said. "The mindset was just be grateful you have a job."