Greece's New Finance Minister: 'You Have To Be Prepared To Blow The Whole Thing Up' 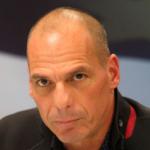 Greece will neither seek an extension of its controversial bailout nor cooperate with the so-called "troika" of international creditors, the country's new finance minister declared Friday, following up on a previous threat to "blow the whole thing up" in order to win concessions designed to boost the Greek economy.

The comments by Yanis Varoufakis, an economist and member of the leftist Syriza party, threaten to unravel carefully negotiated but deeply unpopular bailouts of Greece by the European Central Bank, International Monetary Fund and European Commission that led to harsh austerity and severe cuts in government spending. The Syriza party won Sunday's national election.

Greece's economy has shrunk by about 30 percent since 2008, according to data compiled by the World Bank. Its economy was smaller in 2013 than in 2005. About a quarter of its workers are unemployed, according to the Hellenic Statistical Service, or Elstat. Youth unemployment exceeds 50 percent.

"We are not going to cooperate with a rottenly constructed committee," Varoufakis said, according to news reports. The troika has been monitoring Greece's progress toward commitments made by previous administrations as part of its bailout, such as selling off state assets and trimming worker benefits and government payrolls.

Varoufakis added that the Greek government would not seek to delay the approaching Feb. 28 deadline to extend the terms of the country's bailout. "This platform enabled us to win the confidence of the Greek people," he reportedly said.

"The Greek state has a future, but what we won’t accept as a future is the self-perpetuating crisis of deflation and unsustainable debt," Varoufakis said, according to news reports.

The comments come as Greece's economy staggers to grow following a brutal, six-year recession that decimated household finances and appears to have been worsened by the very bailouts that were supposed to rescue it.

Just over 10 percent of the 240 billion euro bailout has been used to finance government operations, according to figures compiled by MacroPolis. The rest has gone to repaying creditors and bailing out banks.

It is against this backdrop that previous comments by Varoufakis, highlighted Friday by the radio program "Left Business Observer," may prove instructive in trying to understand the Syriza party's aims and the lengths to which Greece's new ruling party will go in order to reduce the country's debt burden.

In a November interview, Varoufakis told Doug Henwood that the world should expect a "potentially explosive negotiation" if the Syriza party should win Greece's then-upcoming election.

"The only thing you can really do is negotiate with the rest of Europe," Varoufakis said. "But to negotiate, to be taken seriously, you have to have a credible threat. You have to be prepared to blow the whole thing up, simply by being intransigent if you are not taken seriously.

"So, this is my recommendation: Prepare for a very tough, very painful, potentially explosive negotiation."

In a 2010 interview with Henwood, Varoufakis recounted a conversation he claimed to have had with an official at the European Central Bank, who told him that the international creditors planned to push the country into a "permanent recession" in order to drive down wages as part of a plan to reform the Greek economy.

In a November 2014 interview, Varoufakis predicted that countries pushing Greeks to accept austerity -- such as Germany -- would be doomed to repeat the experience of the victors of World War I, who imposed such harsh conditions on Germany that many believe it led to the rise of Adolf Hitler.

"I think we'll have a repeat performance of that," Varoufakis said of Germany today.