Mozart for the Birds? 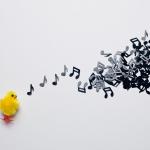 Picture yourself inside a high-tech structure, ambient lighting shifts into pleasing hues while the soothing strains of Mozart fill the air. Is it a train station? A futuristic home? Not exactly — the setting is a barn full of chickens in Malaysia. Reuters’ Naveen Thukral and Gavin Maguire report that it’s all part of the quest to produce healthier poultry.

They write that a Malaysia and Singapore-based company called Kee Song Group uses classical music as part of its effort to “mass produce drug and hormone-free poultry at a reasonable price.” And though the Kee Song Group’s quest for affordable, drug-free chickens isn’t unique, report Thukral and Maguire, the way they’re treating their chickens is.

Kee Song’s chickens snack on probiotic-laced feed and drink special water as they listen to Mozart. The company uses each tactic to foster a calmer environment for chickens who are raised without antibiotics or artificial hormones. Thukral and Maguire report that Kee Song Group pays a premium for its tranquil barn: since its facility is drug-free, it must submit to more stringent cleaning procedures. It also takes longer for chickens to reach an ideal weight before slaughter.

Happier chickens are worth a bit of extra TLC, the firm’s chairman tells Reuters. “Look at the environment, the chickens stay happy and healthy here…even the droppings don’t smell.” Though the chickens aren’t free-range, they’re free to roam about their musical barn — and since the chickens aren’t treated with drugs, they don’t risk the oversized breasts and underdeveloped legs common in antibiotic-treated poultry. Consumers agree with the approach, too — these classically-raised chickens costs less than their counterparts and are starting to show up in the kitchens of high-end restaurants.

It’s not the first time music has been used to soothe animals. In 2008, scientists found that elephants who were played a CD of classical music showed fewer abnormal behaviors than a control group. And this year, a study on shelter dogs exposed to similar tunes revealed “the potential of auditory stimulation as a highly effective environmental enrichment technique for kennel dogs.” There’s no telling if the music alone benefits the chickens or just makes the people tending them more relaxed — or what Wolfgang Amadeus Mozart, who is known to have enjoyed chicken himself, would think of a barn blasting his music.