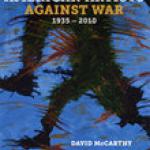 The themes of American artists presenting their work against war go back, most vividly, a full century, to the 1910s, and coincide with the emergence of Ash Can Realism in the Masses magazine. Ash Can (so named after the use of slum scenes in drawings and paintings), a uniquely American artistic revolution distinct from its avant-garde contemporary, Modernism, popularized a politically flavored naturalism. In the same Masses, a series of stunning visual protests agitated the federal government put artists along with the magazine’s editors on trial, effectively suppressing the liveliest of radical experiments. Such dissent could no more be permitted by the liberal administration of Woodrow Wilson than by the new Federal Bureau of Investigation, with a young J. Edgar Hoover in charge of hotly pursuing dissents. Art was obviously considered dangerous, even if a few years later the most avant-garde expressions, not necessarily political, would grace the new Museum of Modern Art.

Art historian David McCarthy picks up the story at what I would consider midstream, but for good reasons. So much happened so quickly after 1917. Consider the rise of the lithograph. These were art works printed in fairly limited editions that many young radicals could use to make a living of sorts, and also build an audience. Consider the rise of Fascism, first in Italy and Hungary, then in Germany.  (When I interviewed Masses artist Hugo Gellert, then in his ninety-third year, he recalled that he left the New Yorker when commanded to draw Mussolini in a favorable light. Gellert had grown up within the Hungarian-American Left and was already in the 1920s a noted figure in the campaign against Horthy.) Consider the Popular Front that opened up in 1935. And consider, perhaps above all, then sweeping influence of the New Deal’s role in American art, from post offices to galleries.

Not that the nature of antiwar art, stylistic or thematic, could ever be simple or uncontested. To the end of their generational lives, the giants of the 1930s would oppose brutal aggression, with a later, particular high point in their art directed against the US invasion of Vietnam. But contrary to their critics (and contrary to official Russian views, likewise that of official cultural dignitaries within the American Communist Party), they had never been entirely tied to Realism or any other doctrine for their art. Individual artists had their own, irreducible styles, even when some styles would be favored over others by particular critics, galleries or leftwing publications. Their descendants, who come in mostly with the 1960s-70s and remain (or are in their turn succeeded by others) active into the twenty-first century, follow suit proudly.

If naturalism can be considered a likely impulse of the political-minded artist, there were also other reasons. As McCarthy says, “naturalism predates the assimilation of modernism…and profoundly shaped it as well. To engage an audience broader than that familiar with experimental art often meant perpetuating conventional media, styles and subject matter” (p.9). Thus the impact of Picasso’s “Guernica,” easily the most iconic piece of art relating to the Spanish Civil War. This painting about a fascist attack upon a civilian population has been viewed so often (the author argues) as to become “banal” for later generations of artists, but its depiction of disembodied humans and animals hit popular audiences as well as artists. Socialist Realist, it wasn’t. The very American Artists Congress (AAC) that first sponsored a US showing would be a lodestone of the politicized art scene.

McCarthy effectively takes us through the work of Gellert, Rockwell Kent, Philip Evergood, Lynd Ward, Anton Refregier and Stuart Davis, among others, through the exhibits and activities of the 1930s and beyond. The trauma of the Molotov-Hitler Pact (not to mention the earlier “Show Trials” of Stalin’s victims) destroyed the AAC itself after a few years, but a milieu had been created for wartime antifascist art, with collaborators as prominent as Moses Soyer and the neglected (in recent decades’ commentary) David Smith. Hiroshima opened up another window of horrors, even for many avid supporters of the War, when the Cold War put atomic (the nuclear) devastation on a potential war-agenda.

Artists campaigning for Henry Wallace in 1948, like Ben Shahn and Philip Evergood, fell under Congressional scrutiny for “disloyal” art. A decade later, Diego Rivera spearheaded an international campaign for suspending atomic-nuclear testing, prompting nationwide protests (and intense scrutiny from the FBI). Ben Shahn’s 1961 series of drawings based upon the fate of a Japanese fishermen suffused with radiation brought an older generation a new legitimacy. The concurrence of consumerism and catastrophe, as McCarthy says, caught the “black humor” irony of social criticism, so obvious on the big screen in “Dr. Strangelove” (1964).

Angry Arts, engaged in direct actions of various kinds against the horrendous assault on Vietnam a few years later, bought together young and old artists, peace and anti-racist messages. At this point, doubtless in part because of a generational shift, modernism and then postmodernism infused much of the political material, as did feminism and gay liberation.

Here, I think, the narrative of American Artists Against War weakens, almost inevitably. Some of the most effective antiwar art of the Korean War period was found in the war comics written, and partly drawn, by future Mad Magazine founder Harvey Kurtzman and seen by half-a-million newsstand buyers. No small quantity of effective antiwar art from the later 1960s to the middle 1970s could be found, and was found by millions of readers, in the pages of the Underground Press. Some of the illustrations offered by McCarthy here are in fact posters, an indication of the poster-making revolution from 1970 onward that ran parallel with the community murals movement that made art accessible to wide, new (and notably minority) audiences.

To encompass such phenomena would demand a much larger and different book, but the focus on the art world of galleries, paintings, installations and so on, makes more sense for the art scene after 1980. Here again, political groups like New York’s PADD aka Political Art Documentation and Distribution, active in the antiwar activities of the 1970s-80s gave radical artists ways to mobilize and present themselves and their work. (Disclosure: a magazine that I’d edited, Cultural Correspondence, became a sort of PADD organ and sponsor of the Radical Humor Festival, a related intervention). The US invasions after 9/11 brought artists-activists like Martha Rosler into new and innovative antiwar efforts that continue to this day.

I might wish that McCarthy had dealt with World War 3 Illustrated, a comics annual (and group) that presents militant art as well as organizing projects generally far from galleries. But never mind: American Artists Against War provides a great deal of useful interpretation and a vivid sense of artists’ urgent desires “to shape perception of the world beyond the studio.”(p. 187). Without their efforts, the protest against war and injustice would be so much less.

Paul Buhle was publisher of the decidedly antiwar Radical America Komiks (1969) and has edited a dozen nonfiction comic art books in recent years.