HangOut on Strategy for Liberation 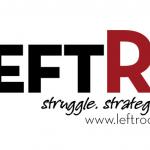 HangOut on Strategy for Liberation

Please join us for our next national HangOut, which is being jointly hosted by LeftRoots with the former Left Strategies network. Featuring special guests M Adams and Biju Mathew on left strategies for liberation! Together we will discuss what we mean by ‘transformational strategy’, why it is crucial and how we can move forward together to build a movement that wins!

Millions of people in the US are involved in some kind of struggle against an aspect of the system. But do they have a strategy to transform the whole thing? Do any of us have a strategy for liberation?

We march against racist police murders and gentrification. We fight for a living wage for workers and equality for women and LGBT people as well as for the very survival of the planet.

We work hard, past the point of burnout, grinding for each reform.

We cheer as people take to the streets, for days, sometimes weeks in uprisings that shake people awake and shake the government’s stability, at least momentarily.

But what will it take to transform the whole society? How can each step we take move us toward that goal? How can we use our strengths to attack the other side’s weaknesses? What sections of society can be brought together to uproot oppression and capitalism?

These are the questions revolutionaries ask in order to develop strategy.  While we don’t yet have the answers, we believe it is worthwhile to take the time to answer them.

Our HangOut will feature the following speakers:

In preparation for this HangOut: we are reading several short contemporary essays on strategy and a portion of Path to Power, the document which laid out the strategy for overthrowing apartheid in South Africa. These short pieces will help us understand what type of analysis and clarity is needed in order to develop transformative strategy for the left in the United States. We see transformative strategy as a framework that describes how, on shifting terrain and against an opposing force(s), a set of aligned forces can achieve the power and influence necessary to achieve a defined objective which is currently unattainable given the existing balance of power.

You will receive the readings after you register.

We hope you can join us!

For more information about LeftRoots, please check us out at www.leftroots.net.

LeftRoots is a young national formation of left social movement organizers and activists who want to connect grassroots struggles to a strategy to win liberation for all people and the planet. LeftRoots is driven by its members - LR Cadre - with committed supporters, LR Compas. While mass organizations must be central features of strong and vibrant social movements, Left cadre formations are too. The U.S. Left, due in part to external assaults and in part from internal weaknesses, is at this point unable to cohere these mass struggles into an effective force for revolution. This must change if humanity has any hope of surviving, much less thriving. This is a central task of a rekindled Left, and Leftists engaged in mass organizations and social movements have a unique, but yet unfulfilled, role to play in helping to reimagine and give life to a Left that is as radical as it is grounded in mass struggles.

Left Strategies was a national network of mass organizers and social movement activists interested in developing new left strategy and vision based in our experience and practice. The LS network was for organizers that want to develop clarity about their role in challenging white supremacy, capitalism and patriarchy in their work, to create shared strategies for building transformative social movements. LS worked to create a political-intellectual space that could lead to the advancement of mass struggle, the opportunity for social movement activists to grow politically and deepen relationships across region and sector, and seed new forms of organizing and analysis.

In 2015, given our shared politics and commitment to the development of strategy, most of Left Strategies combined forces with LeftRoots.

LeftRoots HangOuts are open to activists and organizers who are: