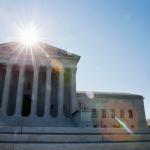 The authors of the US Constitution did not outline a two-party system. Nor did they imagine that a plan for reasonable checks and balances would become a tool to empower petty obstructionists.

What the framers established was a system of separated powers with three branches of government: executive, legislative, and judicial. In the event of a vacancy on the the nation’s highest court, the founding document explained that the president “shall nominate, and by and with the Advice and Consent of the Senate, shall appoint…Judges of the supreme Court.”

The Constitution does not say that presidents may nominate justices. It says they shall do so.

The Constitution does not say that presidents are limited in this duty by the timing when a vacancy occurs. There is no footnote that says presidents shall only perform their duties in their first terms. Nor is there a footnote that says members of the Senate shall only provide appropriate advice and consent when a president is in his or her first term. And there is certainly no language that suggests that a president’s nominee to the Court must parallel the ideology of the justice he or she would replace.

Yet Republican senators responded to the death of Supreme Court Justice Antonin Scalia by proposing to shred not just the Constitution but precedents that date from the earliest years of the American experiment. Within hours of the announcement of the conservative jurist’s death on Saturday, Senate majority leader Mitch McConnell declared that “this vacancy should not be filled until we have a new president.”

“I plan to fulfill my constitutional responsibilities to nominate a successor in due time.” —President Obama

That would leave a vital position vacant for a year.

Hours after McConnell outlined his unreasonable demand, the Republicans who would be president used Saturday night’s crude and chaotic Republican presidential debate to be more unreasonable. They proposed that President Obama abandon his constitutionally defined role in the process. They urged the Republican-controlled Senate to “delay, delay, delay” until the end of the president’s second term. And they proposed ideological litmus tests dictated not by regard for the Constitution but by their own rabid partisanship. Dr. Ben Carson summed up the sentiment when he said “we should not allow a judge to be appointed during [this president’s] time.”

Even the Republican who has attempted to sell himself as the rational alternative in an otherwise feverish field, Ohio Governor John Kasich, said, “I really wish the president would think about not nominating somebody” because “the country is so divided right now.”

All the Republicans joined in this egregious assault on the basic premises of the Constitution and on the system of functional governance that is supposed to extend from it.

It fell to President Obama to show respect both for the memory of Justice Scalia—who he recognized as “one of the most consequential judges and thinkers to serve on the Supreme Court” and as a jurist who “dedicated his life to the cornerstone of our democracy: the rule of law”—and for the dictates of the Constitution. “I plan to fulfill my constitutional responsibilities to nominate a successor in due time,” said Obama. “There will be plenty of time for me to do so, and for the Senate to fulfill its responsibility to give that person a fair hearing and a timely vote.”

The president is not naive. He knows that his nominee must secure the approval of at least a handful of Republican senators in order to be approved. But President Obama has already nominated two justices who have been confirmed with bipartisan majorities. He has a history of striking the right balance.

The president was right to embrace the responsibilities of his office.

President Obama says the duty of a president to nominate Supreme Court justices is “bigger than any one party.”

And Senators Marco Rubio, R-Florida, and Ted Cruz, R-Texas, were wrong to suggest that it would be unprecedented for a term-limited president to nominate a justice and to have that nominee confirmed in an election year

“It’s been over 80 years since a lame-duck president has appointed a Supreme Court Justice,” claimed Rubio, who joined the chorus of Republicans debaters arguing that President Obama should hand off the responsibility to a successor who they all seemed to presume would be a conservative.

Cruz said, “We have 80 years of precedent of not confirming Supreme Court Justices in an election year.”

The debate moderator, John Dickerson of CBS News, pointed our that Supreme Court Justice Anthony Kennedy was confirmed in 1988.

“No,” replied the know-it-all senator, “Kennedy was confirmed in ’87.”

Cruz and Rubio, both of whom claim to revere the Constitution and Ronald Reagan, got a lot wrong about the document and the former president.

Justice Kennedy was nominated by Reagan, a conservative Republican, in November 1987. But he was not confirmed until February 1988 by the Senate, which was then controlled by the Democrats.

Reagan, who could not seek a new term, met the definition of a lame duck. And 1988 was definitely an election year: Kennedy was confirmed five days before the Iowa caucuses and sworn in six days before New Hampshire’s primary.

Kennedy was merely the most recent of more than a dozen justices who were confirmed during the course of election years.

A number of other justices were nominated and confirmed on the cusp of election years. Justice Clarence Thomas, for instance, was confirmed in the fall of 1991—well after candidates had begun positioning for the 1992 race that would see President George H.W. Bush (the man who nominated Thomas) swept from office. It’s worth noting that, despite the proximity to an election, and despite the fact that the Senate was controlled by the opposition party, Bush nominated a new justice who was dramatically more conservative than the man he would succeed, Justice Thurgood Marshall.

There is no uncertainty here, no open question. Obama is correct when he says that the responsibilities of the president and the Senate are “bigger than any one party.”

“They are about our democracy,” he said on Saturday. “They’re about the institution to which Justice Scalia dedicated his professional life, and making sure it continues to function as the beacon of justice that our founders envisioned.”