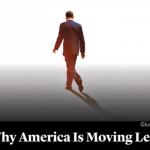 Over roughly the past 18 months, the following events have transfixed the nation.
In July 2014, Eric Garner, an African American man reportedly selling loose cigarettes illegally, was choked to death by a New York City policeman.
That August, a white police officer, Darren Wilson, shot and killed an African American teenager, Michael Brown, in Ferguson, Missouri. For close to two weeks, protesters battled police clad in military gear. Missouri's governor said the city looked like a war zone.
In December, an African American man with a criminal record avenged Garner's and Brown's deaths by murdering two New York City police officers. At the officers' funerals, hundreds of police turned their backs on New York's liberal mayor, Bill de Blasio.
In April 2015 another young African American man, Freddie Gray, died in police custody, in Baltimore. In the chaos that followed, 200 businesses were destroyed, 113 police officers were injured, and 486 people were arrested. To avoid further violence, a game between the Baltimore Orioles and the Chicago White Sox was postponed twice, then played in an empty stadium with police sirens audible in the distance.
Then, in July, activists with Black Lives Matter, a movement that had gained national attention after Brown's death, disrupted speeches by two Democratic presidential candidates in Phoenix, Arizona. As former Maryland Governor Martin O'Malley fidgeted onstage, protesters chanted, "If I die in police custody, avenge my death! By any means necessary!" and "If I die in police custody, burn everything down!" When O'Malley responded, "Black lives matter, white lives matter, all lives matter," the crowd booed loudly. Later that day, O'Malley apologized. Donald Trump, who had ascended to first place in the race for the Republican presidential nomination while promising to represent the "silent majority," called O'Malley "a disgusting little weak, pathetic baby."
Anyone familiar with American history can hear the echoes. The phrase by any means necessary was popularized by Malcolm X in a June 1964 speech in Upper Manhattan. In the wake of Martin Luther King Jr.'s assassination in April 1968, Baltimore burned, as many cities did amid the racial violence that broke out every spring and summer from 1964 to 1969. In November 1969, in a speech from the Oval Office, Richard Nixon uttered the phrase silent majority. It soon became shorthand for those white Americans who, shaken by crime and appalled by radicalism, turned against the Democratic Party in the '60s and '70s. For Americans with an ear for historical parallels, the return of that era's phrases and images suggests that a powerful conservative backlash is headed our way.
At least, that was my thesis when I set out to write this essay. I came of age in the '80s and '90s, when the backlash against '60s liberalism still struck terror into Democratic hearts. I watched as Ronald Reagan moved the country hard to the right, and as Bill Clinton made his peace with this new political reality by assuring white America that his party would fight crime mercilessly. Seeing this year's Democratic candidates crumple before Black Lives Matter and shed Clinton's ideological caution as they stampeded to the left, I imagined the country must be preparing for a vast conservative reaction.
But I was wrong. The more I examined the evidence, the more I realized that the current moment looks like a mirror image of the late '60s and early '70s. The resemblances are clear, but their political significance has been turned upside down. There is a backlash against the liberalism of the Obama era. But it is louder than it is strong. Instead of turning right, the country as a whole is still moving to the left.

Bush destroyed centrist Democrats intellectually, by making it impossible for them to credibly critique liberalism from the right.

That doesn't mean the Republicans won't retain strength in the nation's statehouses and in Congress. It doesn't mean a Republican won't sooner or later claim the White House. It means that on domestic policy-foreign policy is following a different trajectory, as it often does-the terms of the national debate will continue tilting to the left. The next Democratic president will be more liberal than Barack Obama. The next Republican president will be more liberal than George W. Bush.
In the late '60s and '70s, amid left-wing militancy and racial strife, a liberal era ended. Today, amid left-wing militancy and racial strife, a liberal era is only just beginning.
Understanding why requires understanding why the Democratic Party-and more important, the country at large-is becoming more liberal.
The story of the Democratic Party's journey leftward has two chapters. The first is about the presidency of George W. Bush. Before Bush, unapologetic liberalism was not the Democratic Party's dominant creed. The party had a strong centrist wing, anchored in Congress by white southerners such as Tennessee Senator Al Gore, who had supported much of Ronald Reagan's defense buildup, and Georgia Senator Sam Nunn, who had stymied Bill Clinton's push for gays in the military. For intellectual guidance, centrist Democrats looked to the Democratic Leadership Council, which opposed raising the minimum wage; to The New Republic (a magazine I edited in the early 2000s), which attacked affirmative action and Roe v. Wade; and to the Washington Monthly, which proposed means-testing Social Security.
Centrist Democrats believed that Reagan, for all his faults, had gotten some big things right. The Soviet Union had been evil. Taxes had been too high. Excessive regulation had squelched economic growth. The courts had been too permissive of crime. Until Democrats acknowledged these things, the centrists believed, they would neither win the presidency nor deserve to. In the late 1980s and the 1990s, an influential community of Democratic-aligned politicians, strategists, journalists, and wonks believed that critiquing liberalism from the right was morally and politically necessary.
George W. Bush wiped this community out. Partly, he did so by rooting the GOP more firmly in the South-Reagan's political base had been in the West-aiding the slow-motion extinction of white southern Democrats that had begun when the party embraced civil rights. But Bush also destroyed centrist Democrats intellectually, by making it impossible for them to credibly critique liberalism from the right.
In the late 1980s and the 1990s, centrist Democrats had argued that Reagan's decisions to cut the top income-tax rate from 70 percent to 50 percent and to loosen government regulation had spurred economic growth. When Bush cut the top rate to 35 percent in 2001 and further weakened regulation, however, inequality and the deficit grew, but the economy barely did-and then the financial system crashed. In the late '80s and the '90s, centrist Democrats had also argued that Reagan's decision to boost defense spending and aid the Afghan mujahideen had helped topple the Soviet empire. But in 2003, when Bush invaded Iraq, he sparked the greatest foreign-policy catastrophe since Vietnam. 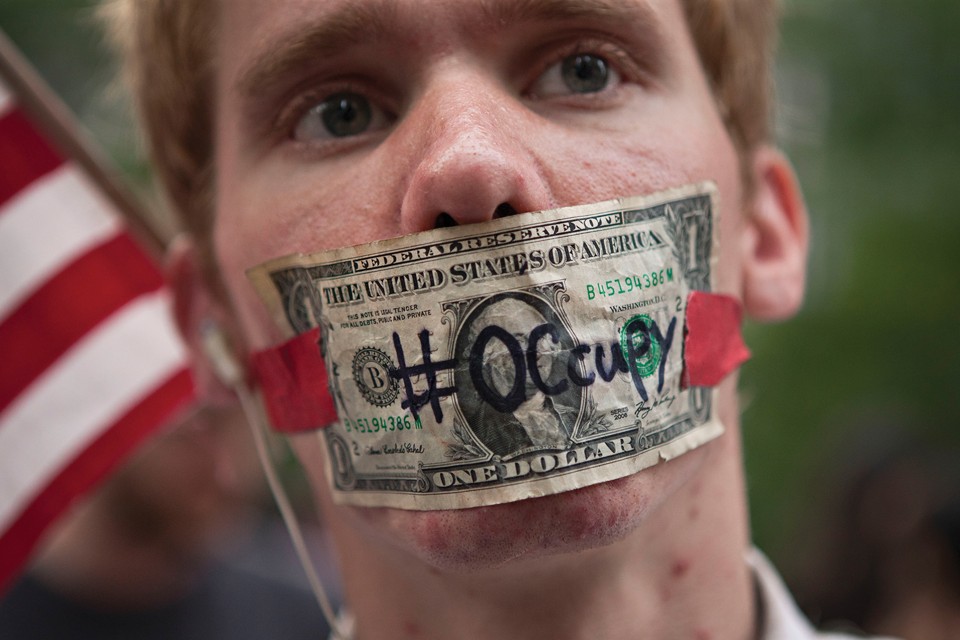 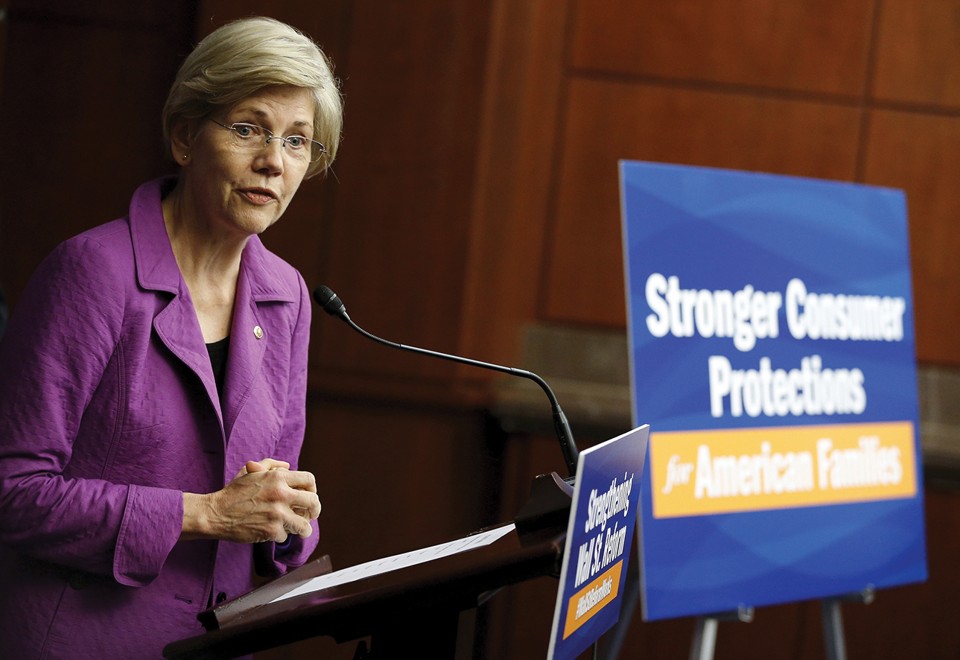 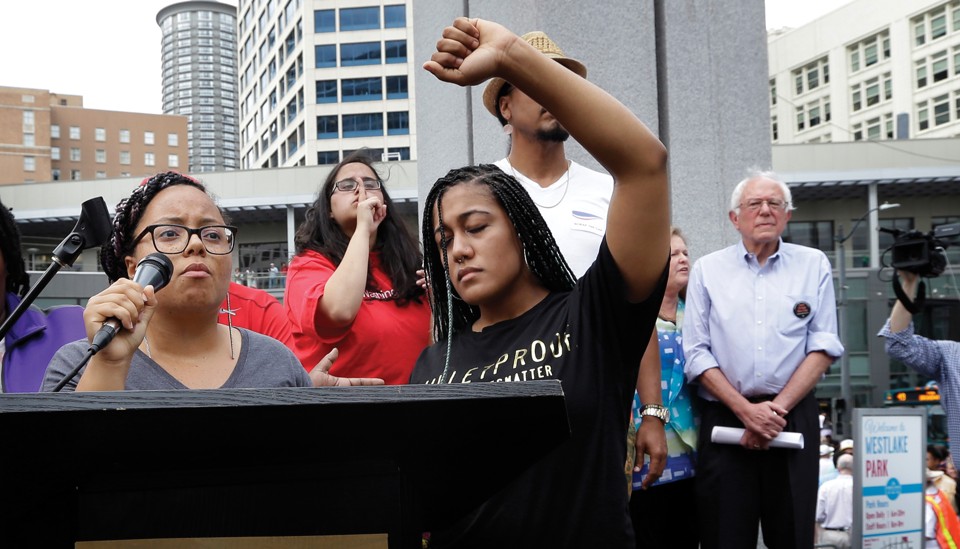 Bernie Sanders stands aside as his microphone is hijacked by Black Lives Matter activists at an August rally in Seattle.
photo credit: Associated Press // The Atlantic
Still, even as some Republican politicians attack Black Lives Matter, others are working with Democrats to promote an agenda of police and prison reform. Last year, then-Speaker of the House John Boehner declared, "We've got a lot of people in prison that frankly, in my view, really don't need to be there." In October, a group of conservative Republican senators-Chuck Grassley, John Cornyn, Mike Lee, and Lindsey Graham-joined Democrats in introducing legislation to reduce mandatory minimum sentences for nonviolent drug crimes, roll back harsh "three strikes and you're out" sentencing laws, end solitary confinement for juveniles, and allow teenagers to have their criminal records expunged.
Even among the Republicans running for president, the policy agenda is moving away from the punitive approach both parties once embraced. Mike Huckabee, Rand Paul, Chris Christie, John Kasich, and Ted Cruz have all condemned the excessive imprisonment of nonviolent drug offenders.
Most interesting-because he is the Republican candidate with the keenest sense of how to appeal to the general electorate-has been the approach of Senator Marco Rubio. In August, a Fox News anchor asked him about Black Lives Matter. Instead of condemning the movement, Rubio told the story of an African American friend of his whom police had stopped eight or nine times over the previous 18 months even though he had never broken the law. "This is a problem our nation has to confront," Rubio declared. Then he talked about young African Americans who get arrested for nonviolent offenses and pushed into plea deals by overworked public defenders. The government, he said, must "look for ways to divert people" from going to jail "so that you don't get people stigmatized early in life."
Conservative Republicans didn't talk this way in the '90s. They didn't talk this way even in the early Obama years. The fact that Rubio does so now is more evidence that today, unlike in the mid-'60s, the debate about race and justice isn't moving to the right. It's moving further left.
What's different this time? One difference is that in the 1960s and '70s, crime exploded, fueling a politics of fear and vengeance. Over the past two decades, by contrast, crime has plummeted. And despite some hyperbolic headlines, there's no clear evidence that it's rising significantly again. As The Washington Post's Max Ehrenfreund noted in September after reviewing the data so far for 2015, "While the number of homicides has increased in many big cities, the increases are moderate, not more than they were a few years ago. Meanwhile, crime has declined in other cities. Overall, most cities are still far safer than they were two decades ago."

On issue after issue, it is the young who are most pleased with the liberal policy shifts of the Obama era, and most eager for more.

And it's not just crime where the Democratic Party's move leftward is being met with acceptance rather than rejection. Take LGBT rights: A decade ago, it was considered suicidal for a Democratic politician to openly support gay marriage. Now that debate is largely over, and liberals are pushing for antidiscrimination laws that cover transgender people, a group many Americans weren't even aware of until Caitlyn Jenner made headlines. At first glance, this might seem like too much change, too fast. Marriage equality, after all, gives gays and lesbians access to a fundamentally conservative institution. The transgender-rights movement poses a far more radical question: Should people get to define their own gender, irrespective of biology?
Yet the nation's answer, by large margins, seems to be yes. When the Williams Institute at the UCLA School of Law examined polls, it found that between two-thirds and three-quarters of Americans now support barring discrimination against transgender people. It also found a dramatic rise in recent years in the percentage of Americans who consider anti-transgender discrimination a "major problem." According to Andrew Flores, who conducted the study, a person's attitude toward gays and lesbians largely predicts their attitude toward transgender people. Most Americans, in other words, having decided that discriminating against lesbians and gay men was wrong, have simply extended that view to transgender people via what Flores describes as a "mechanism of attitude generalization."
That is why, in the 2016 presidential race, Republicans have shown little interest in opposing transgender rights. In July, the Pentagon announced that transgender people will be able to serve openly in the military. One Republican presidential candidate, Mike Huckabee, denounced the move. Another, Jeb Bush, appeared to support it. The remaining contenders largely avoided the issue. 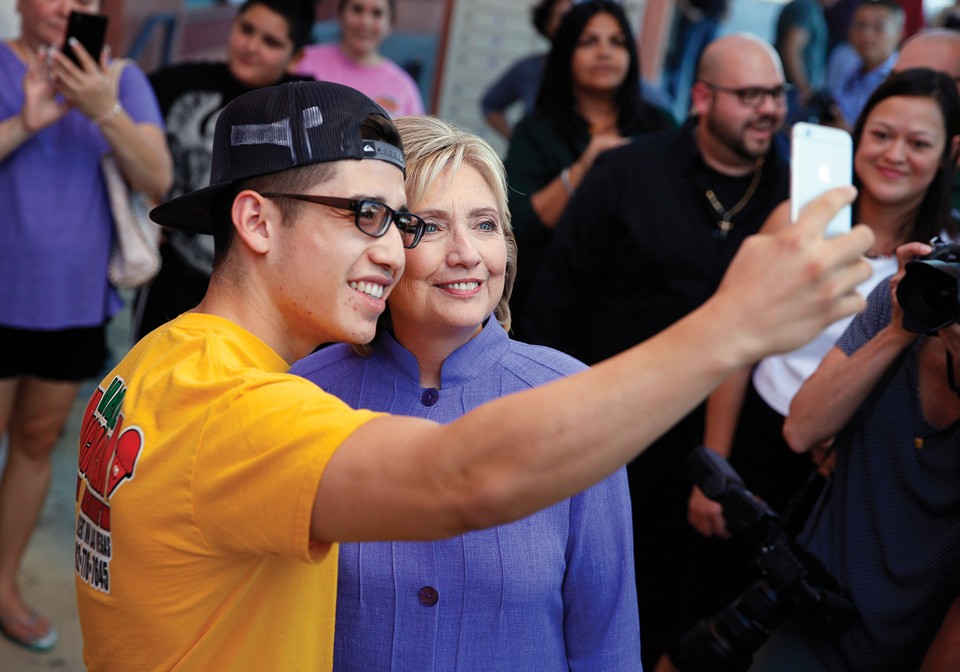 Barack Obama sought the presidency hoping to be the Democrats' Reagan: a president who changed America's ideological trajectory. And he has changed it.