The Passion of the Bureaucrats

Avarizia: Le Carte che Svelano. Ricchezza, Scandali e Segreti della Chiesa di Francesco
By Emiliano Fittipaldi
Feltrinelli Editore, 224 pages
Paperback   Euros - 11.90 (Italian edition)
(available from Amazon:  $21.80)
November 5, 2015
ISBN 978 88 07 17298 4
Merchants in the Temple: Inside Pope Francis's Secret Battle against Corruption in the Vatican
By Gianluigi Nuzzi, translated by Michael Moore
Henry Holt and Co., 224 pages
Hardcover:   $19.20 (Amazon)
November 10, 2015
ISBN 978 1 62779 865 5
`Most blessed Father,' five international auditors wrote to Pope Francis on 27 June 2013, three months into his papacy, `there is an almost total lack of clarity in the accounts of both the Holy See and the Governorate.' The letter goes on:
This lack of clarity makes it impossible to establish a proper estimate of the real financial position of the Vatican, whether as a whole or with regard to the single elements of which it is made up. It also means that no one can really consider themselves responsible for its financial management. All we know is that the data we examined indicates a seriously negative trend and we deeply suspect that the Vatican as a whole has a serious structural deficit.
Six days later the letter, which continues with some scathing criticism of the Curia's administrators, was part of the documentation for an emergency meeting addressed by Pope Francis himself. In a move some complain is typical of his style of management, he used the occasion not to solicit advice, but to announce a decision he had already taken: the formation of an ad hoc committee to study the economic and administrative structure of the Vatican. Dubbed `Cosea', the committee would have eight members, one of whom, Jean-Baptiste de Franssu (52, French), is now president of IOR, the Vatican bank, while another, Monsignor Lucio Balda (55, Spanish), is in a prison cell charged with leaking the documents that form the basis for the two books under review.
Cosea lasted ten months, fighting an increasingly poisonous battle with the various elements of the Curia as it struggled to obtain the information that might afford a clearer picture of what goes on in the Vatican. Since the Curia was overwhelmingly Italian and clerical while seven of the eight-member Cosea were foreigners and five of them laypersons, misunderstandings were inevitable. To make matters worse, the one Italian on the commission was also the only woman (it's surprising there was a woman at all), and probably the least likely to get on with the elderly cardinals and monsignors. Francesca Immacolata Chaouqui, born in Calabria to an Italian mother and a Frenchman of Moroccan descent, was just thirty at the time of her appointment, a PR expert with a degree in law and a remarkable ability for making influential friends. Pope Francis said recently that he isn't quite sure how she came to be on the commission, but believes she was recommended by Monsignor Balda. Chaouqui is now charged along with Balda of leaking information to journalists, while the Vatican magistrates accusing her of this have made public some embarrassingly compromising text messages that the two exchanged while serving on the commission. `You need to fuck,' Chaouqui writes in one message. And in another: `You should try my cousin. She's squishy.' It would be hard to imagine a better set-up for a soap opera.
And harder still to work out from these two books whether the Vatican really is on the brink of bankruptcy or, on the contrary, swimming in cash. Emiliano Fittipaldi's Avarizia opens with a description of an expensive lunch with two unnamed monsignors who have brought along a carload of documents but forgotten their wallets. Acting, they say, in support of the pope's reforming mission, the clerics give Fittipaldi a list of all the things they feel the world and the pope should know about greed and corruption in the Vatican, a list that reads like an informal index to the book: certain cardinals' wild spending on their lavish apartments; the hijacking of offerings to the poor for quite other ends; the tendency of priests and nuns to stash away any money that comes their way in tax havens; the difficulty getting IOR and Apsa (the Administration of the Patrimony of the Apostolic See, which administers the Vatican's properties and investments) to conform to international anti-money-laundering regulations; the never-ending habit of giving jobs to relatives and friends even when there is no work to do; the transformation of the process of canonisation into a lucrative business; the exploitation of the Vatican's tax-free status to sell cheap cigarettes, petrol, clothes and electronic goods to Italian citizens; the Curia's investments in Exxon, Dow chemicals and other hardly virtuous multinationals etc, etc.
Opening every chapter with a stern quotation - `Thou shalt not store up treasures on earth,' `Thou shalt not covet thy neighbour's house' - Fittipaldi explores these scandals one by one, quoting generously from the documents in his possession, a number of which he presents as facsimiles for the sake of authenticity. The anecdotes are endless: the monsignor who appropriates a room from the adjacent apartment of a poorer priest simply by knocking down the party wall while the other man is in hospital; the diplomat priest who takes advantage of the diplomatic bag to carry mafia money across the Swiss border; the organisation Propaganda Fide, instituted to evangelise the world, that spends relatively little on this mission while owning almost a thousand valuable properties in and around Rome, many of them rented way below market price to friends and favourites. 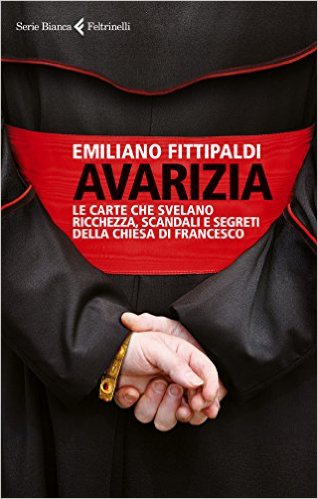 It is striking how many Catholic organisations seem to do a whole range of lucrative things they were never set up to do, while still enjoying tax exemption as religious institutions. When priests in Salerno were granted ?2.3 million of public money to build an orphanage in a depressed urban area, they built a luxury hotel instead. Found guilty of appropriating funds under false pretences in 2012, the archbishop of Salerno avoided punishment when the crime lapsed under the statute of limitations before his appeal could be heard. Others went to jail.
Overall, however, it is Fittipaldi's figures rather than his anecdotes that are most fascinating. For example, aside from its vast properties, four major hospitals and several universities, the Vatican possesses stocks and shares worth between ?8 and ?9 billion (Fittipaldi gives a map of its investments around the world). Real estate the Church owns in Italy is deliberately undervalued in order to lower property taxes (auditors estimated the property was worth four times the sums declared). Thanks to the fiscal law known as `otto per mille', which allows Italian citizens to assign 0.8 per cent of income tax to a church of their choice, the Vatican receives about a billion euros a year in state aid (80 per cent of the total fund). Although the ?40 million advertising campaign aimed at persuading taxpayers to opt for the Catholic Church focuses on its humanitarian work in the Third World, only 23 per cent of the money is spent on charity work, and the Church isn't obliged to offer any public account of how it spends the money. Despite the success of its extraordinary museums (?58 million in profits in 2011), the Vatican earns more through the handful of ordinary shops that operate in its tiny territory: a petrol station, a pharmacy, a tobacconist's, a supermarket (which sells electronic goods and clothes). According to treaty agreements between Italy and the Vatican, purchases at these shops are restricted to card-holding citizens of the Vatican (fewer than five hundred people), residents (another three hundred) and employees (2800). Yet the pharmacy alone turns over around ?40 million a year, many times more than a regular Italian pharmacy. Sales figures from the other shops suggest that the Vatican's citizens, mostly priests and nuns, smoke, drink and drive far more than any other population worldwide. In short, the restrictions are not respected: the shops in fact serve around 41,000 customers and the Italian state simply accepts the considerable loss in tax revenue. As the auditors commented, the income is welcome, but being responsible for unloading tax-free cigarettes on the Romans doesn't help the Vatican's image.
Fittipaldi's most curious section covers the process of sanctification, his most damaging the use of the so-called Obolo di San Pietro. In 1588 Pope Sixtus introduced a strict series of hurdles that have to be got over if a dead person is to be beatified and eventually canonised: in particular, one miracle has to be verified for beatification, two for canonisation. The case for sanctification has to be presented by a lawyer, or `postulator', certified by the Vatican. Miracles - overwhelmingly healings - have to be demonstrated to be `true' by having experts testify to the lack of any possible scientific explanation; all documentation, running in some cases to thousands of pages, has to be presented, and indeed published in Latin.
In an attempt to keep the tradition alive, John Paul II encouraged communities to put forward candidates for sanctification. The 482 new saints announced during his long pontificate amounted to almost a quarter of all those canonised in the previous five hundred years. At present some three thousand cases are pending; each one takes many years and requires those proposing a candidate to choose a postulator and open a line of credit at the Vatican bank. The process will not reach a positive conclusion without hundreds of thousands of euros changing hands. Fittipaldi describes the case of the American TV preacher Fulton John Sheen, who died in 1979, which has been handled by the most prolific postulator, Andrea Ambrosi. Proceedings began in 2002 but Fittipaldi only has figures for 2008-13, during which time Sheen's supporters spent more than ?332,000, most of it going into Ambrosi's pocket. `Perhaps it's just coincidence,' Fittipaldi remarks, `but the bills are always higher for the richer American churches.' In one year translation expenses were ?16,000 and publishing expenses ?52,000 (Ambrosi owns a controlling stake in the Vatican publishing house that holds a monopoly on printing the postulators' findings); in 2011 a two-man research trip to the US cost ?13,000. Pope Francis has since warned Ambrosi to tighten his belt, while Sheen remains as yet unbeatified and his supporters frustrated.
The Obolo di San Pietro, or Peter's Pence, is a specific offering made to the pope by Catholics worldwide to support the Church's mission in the world, specifically to assist the poor and needy. `The purpose of the Peter's Pence Collection,' the website of the United States Conference of Catholic Bishops claims, `is to provide the Holy Father with the financial means to respond to those who are suffering as a result of war, oppression, natural disaster and disease.' In 2013 the offering amounted to ?78 million, of which, according to Fittipaldi's documents, very little went to the poor, while a Peter's Pence account in the Vatican bank holds ?378 million (not cited on the Vatican's balance sheet). Examining the situation, Moneyval, the Committee of Experts on the Evaluation of Anti-Money Laundering Measures, concluded that most of the money that left the account `went on ordinary and extraordinary expenses of the Roman Curia's various departments and institutions'. In fact, in 2013 running costs left the Vatican with a deficit of ?77 million, which had to be covered from somewhere. 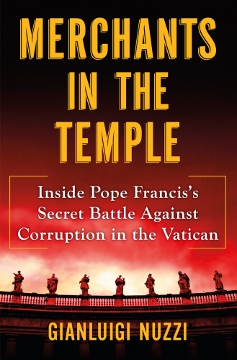