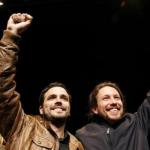 Spain's anti-austerity party Podemos and older left-wing party Izquierda Unida, or United Left, announced Monday that they have reached a preliminary agreement to run on a joint platform before a general election on June 26.

In a statement read to the press, party representatives said the alliance aimed to "recover the country" in favor of the "working classes and social majorities."

Both parties said they would consult their members on May 10 and 11 to formalize the arrangement.

Spain's last election, in December, failed to give any party enough seats to form a government, and five months of talks among the parties have not led to a governing coalition.

A survey released Friday showed voters are still not inclined to revert to the two-party system that has dominated Spanish politics for the past 40 years and are likely instead to spread their votes among 10 different parties .

The survey also suggested Podemos was losing support before the coming election. However, an alliance between Podemos and United Left would leave the two parties with around 23 percent of the vote, making them the main left-wing force, ahead of the once-dominant Socialists but behind the conservative People's Party of acting Prime Minister Mariano Rajoy.

Another survey found that the alliance would be the first choice for people under than 55.