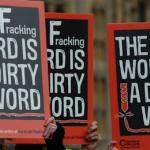 If a court does not uphold the people’s right to stop corporate activities threatening the well-being of the community, the ordinance codifies that, “any natural person may then enforce the rights and prohibitions of the charter through direct action.” Further, the ordinance states that any nonviolent direct action to enforce their Charter is protected, “prohibit[ing] any private or public actor from bringing criminal charges or filing any civil or other criminal action against those participating in nonviolent direct action.”

Grant Township Supervisor Stacy Long explained, “We’re tired of being told by corporations and our so-called environmental regulatory agencies that we can’t stop this injection well! This isn’t a game. We’re being threatened by a corporation with a history of permit violations, and that corporation wants to dump toxic frack wastewater into our Township.”

Long continued, “I live here, and I was also elected to protect the health and safety of this Township. I will do whatever it takes to provide our residents with the tools and protections they need to nonviolently resist aggressions like those being proposed by PGE.”

In 2013, residents in Grant Township learned that PGE was applying for permits that would legalize the injection well. Despite hearings, public comments, and permit appeals demonstrating the residents’ opposition to the project, the federal Environmental Protection Agency issued a permit to PGE.

Finding themselves with no other options, residents requested the help of the Community Environmental Legal Defense Fund (CELDF). Grant Township Supervisors, with broad community support, passed a CELDF-drafted Community Bill of Rights ordinance in June 2014. The ordinance established rights to clean air and water, the right to local community self-government, and the rights of nature. The proposed injection well is prohibited as a violation of those rights.

PGE promptly sued the Township, claiming that it had a “right” to inject within the Township.

The case is ongoing. Last year, in October 2015, the judge invalidated parts of the ordinance, stating that the Township lacked authority to ban injection wells. Three weeks later, in November 2015, residents voted in a new Home Rule Charter. The rights-based Charter reinstated the ban on injection wells by a 2-to-1 vote, overriding the judge’s decision.

CELDF assisted the community with the drafting of the Charter and is representing the Township in the ongoing litigation with PGE.

Grant Township Supervisor and Chairman Jon Perry summed up the situation by saying, “Sides need to be picked. Should a polluting corporation have the right to inject toxic waste, or should a community have the right to protect itself?”

Perry continued, “I was elected to serve this community, and to protect the rights in our Charter voted in by the people I represent. If we have to physically and nonviolently stop the trucks from coming in because the courts fail us, we will do so. And we invite others to stand with us.”

Those others are showing up. Tim DeChristopher, co-founder of the Climate Disobedience Center, stated, “I’m encouraged to see an entire community and its elected officials asserting their rights to defend their community from the assaults of the fossil fuel industry, and I know there are plenty of folks in the climate movement ready to stand with Grant Township.”

CELDF community organizer Chad Nicholson has been working with the community since 2014. He added, “In our country’s history, we celebrate people standing up to challenge unjust laws. The American Revolution, abolition, women’s suffrage, the labor and civil rights movements, marriage equality – all required people to take action resisting illegitimate laws. All required creating new and more just laws in their place. We applaud the people of Grant Township for taking action as their community is threatened, and asserting their rights. It is an honor to stand with them.”