Preparing for the Next Memorial Day 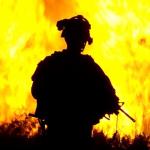 Memorial Day weekend was replete with parades, American flags, and tributes to our war dead, but little reflection on war, particularly the tragic fact that the United States has fallen into the death trap that President Eisenhower warned us about: the military-industrial complex.

Instead of defending our nation as the Constitution stipulates, since the 9/11 attacks the U.S. military, CIA, and military contractors have been waging aggressive wars or interfering by proxy in other nations’ internal affairs.

Looking at our national budget, you can see the overwhelming power of the military. The $600 billion price tag, way over $1 billion a day, eats up 54 percent of all federal discretionary funds. That’s almost as much money as the military budgets of the rest of the world combined. It’s no wonder we don’t have money to address the crisis of global warming, build a decent public transportation system, institute a medicare-for-all health system, or provide the free college education that all our youth deserve.

There have been a few great wins for diplomacy under President Obama, particularly the historic Iran nuclear deal and opening to Cuba. For the most part, however, President Obama has carried over many of the Bush policies. Fifteen years after 9/11, the U.S. military is still in Afghanistan (the longest U.S. war in history) and the Taliban remain strong. U.S. soldiers are still in Iraq, where our invasion opened up the floodgates of sectarian violence that gave birth to the Islamic State. President Obama, a Nobel Peace Prize winner, has bombed seven countries: Afghanistan, Iraq, Pakistan, Yemen, Libya, Somalia, Syria. He never made good on his promise to close the prison in Guantanamo. But he did do something unique: Instead of capturing prisoners and locking them up in Gitmo, he decided instead to kill “suspected terrorists” through drone warfare.

The barbarism of targeting “suspects” by remote control from the comfort of an air-conditioned base in the United States, including in countries where we are not at war, should enrage all Americans who cherish the rule of law. As Army Chaplain and Unitarian Minister Christopher John Anton said last month when he resigned from the military: “The executive branch continues to claim the right to kill anyone, anywhere on Earth, at any time, for secret reasons, based on secret evidence, in a secret process, undertaken by unidentified officials. I refuse to support this policy of unaccountable killing.”

A practical reason for focusing on nonviolent approaches is that violence rarely works. A Rand study examining the 40-year history of groups once designated as terrorists found that out of 268 groups, 43 percent came to their demise through their participation in the political process, 40 percent through effective policing, and only 7 percent through military force.

Add to this scientific evidence the wisdom of the Great Chinese philosopher Lao-Tseu, who said, “It is only when you see a mosquito landing on your testicles that you realize that there is always a way to solve problems without using violence.”

The problem is not just our frequent military interventions, but also the massive amounts of weapons sold by our merchants of war. The United States has become addicted to the lucrative business of war, with U.S. companies now accounting for 31 percent of global arms exports. While the manufacturing base of our nation has been gutted by globalization, the weapons industry is alive and thriving.

The country that is the number one purchaser of U.S. weapons is Saudi Arabia. U.S. arms dealers have sold the Saudis a record $97 billion in weapons in the past 10 years, most of those deals made under President Obama. These transactions represent the largest weapons deals in the history of humankind, and they have been made to one of the most repressive regimes in the world. How tragic that U.S. businesses are arming a country where nonviolent protesters are beheaded in public squares; where bloggers are sentenced to ten years in prison and 1000 lashes; where it is prohibited to set up a church or synagogue; where women are not even allowed to drive; and where the government exports the intolerant form of Sunni Islam, Wahhabism, that forms the ideological basis of Al Qaeda and the Islamic State.

For the past year, the Saudis have been using U.S. weapons, including internationally banned cluster bombs, to decimate neighboring Yemen, creating a severe humanitarian crisis. (One bit of good news is that just this month, the campaign to stop the sale of cluster munitions to Saudi Arabia was successful, with the administration placing a hold on these sales.)

When Pope Francis spoke  to Congress in September 2015, he said this: "Why are deadly weapons being sold to those who plan to inflict untold suffering on individuals and society? Sadly, the answer, as we all know, is simply for money: money that is drenched in blood, often innocent blood. In the face of this shameful and culpable silence, it is our duty to confront the problem and to stop the arms trade."

Congress applauded enthusiastically but then turned around to “dial for dollars,” collecting millions of dollars in campaign contributions from the weapons makers and Pentagon contractors, and in turn awarding them billions in contracts, often no-bid contracts.

Just prior to the Memorial Day commemorations, President Obama made a trip to Vietnam. How did he seal our friendship with that nation, after slaughtering two million of their people? By agreeing to sell them weapons.

From there, Obama went on to Japan, thankfully visiting Hiroshima and giving a very moving speech. Left unsaid, however, was that the Obama administration has agreed to spend $1 trillion in the next 30 years to modernize U.S. nuclear weapons instead of eliminating them.

The anti-war movement was strong and vibrant under George Bush, inspiring hundreds of thousands of people to take to the streets in protest. When Obama became president, the movement fell apart, mainly because many people thought Obama would end U.S. military adventurism.

There can be no illusion, however, about the next resident in the White House. Imagine the conflicts Donald Trump will stir up if he has the chance to insult all the world’s heads of state. And let’s remember that the Democratic presidential option, Hillary Clinton, supported the invasion of Iraq, the surge in Afghanistan, the overthrow of Qaddafi in Libya, the drone wars, and the military coups in Egypt and Honduras. She even talked about obliterating Iran.

In the aftermath of the Memorial Day military parades and with a new administration looming on the horizon, a critical task for the coming year is to build a renewed, more vibrant, interracial, and multi-generational peace movement that will pressure the next administration to:

1. Stop obligating our young men and women to fight unwinnable wars of choice that only make more enemies, and fatten the bank accounts of the military contractors and weapons manufacturers.

2. Cut the military budget so that we have funds for the critical needs here at home, from universal healthcare to free college education to green jobs.

3.Take much better care of our veterans, including the homeless vets, jobless vets, and vets suffering from mental wounds that lead them to commit suicide at a heartbreaking rate of 22 a day.

As Vietnam vet Dan Shea said when he reflected on the names etched and not etched on the Vietnam Memorial, including the missing names of the Vietnamese and all the victims of Agent Orange, including his own son: “Why Vietnam? Why Afghanistan? Why Iraq? Why any war? .…May the mighty roar of the victims of this violence silence the drums that beat for war.”

Medea Benjamin (medea@globalexchange.org), co-founder of Global Exchange and CODEPINK: Women for Peace,and author of a forthcoming book on Saudi Arabia, Kingdom of the Unjust. Her previous books include: Drone Warfare: Killing by Remote Control; Don’t Be Afraid Gringo: A Honduran Woman Speaks from the Heart, and (with Jodie Evans) Stop the Next War Now (Inner Ocean Action Guide). Follow her on Twitter: @medeabenjamin