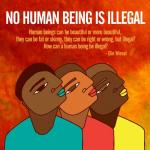 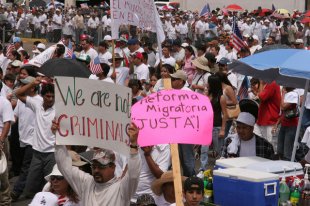 On June 15, coordinated actions were held across the world including in Atlanta, seeking justice for Berta Caceres, an indigenous human rights and environmental justice activist who was assassinated in Honduras on March 3. Several of those charged with her murder have ties to the Honduran military, including at least one high-ranking officer who reportedly was trained by U.S. Rangers.

At the Atlanta action, we also drew attention to the recent ICE raids that have targeted women and children fleeing horrific persecution, rape, murder, and torture in Central American countries such as Honduras, who were seeking a safe haven in this country. Caceres' assassination was only the latest example of this systematic, patriarchal violence, in part facilitated by U.S. government policies and decades of intervention in the region.

The actions of the Obama administration and Immigration and Customs Enforcement combined with the racist rhetoric coming from Republican Party candidates are responsible for generating fear and anxiety in our immigrant and refugee communities. This is only gearing up in the wake of the horrific Orlando attack with attempts to scapegoat Muslim communities.

In order to end government policies of raids, detention and deportation which are tearing apart families in the Latino community in particular, a coalition of local community organizations in metro Atlanta led by the Georgia Latino Alliance for Human Rights, Southerners on New Ground and the Georgia Not1More Coalition has launched an ICE Free Zones campaign.

As part of the campaign, we aim to make our state, cities and neighborhoods welcoming spaces for our immigrant, refugee, Muslim, and queer and trans communities. We demand that ICE put an immediate stop to the deportation raids. We demand that the Georgia legislature stop pushing through bills targeting our communities and instead repeal the xenophobic and discriminatory legislation they passed in previous years. We demand an end to policies of mass incarceration that target and imprison communities of color, immigrants, queer and trans people, and poor people. We demand an end to violence against our communities in whatever form it takes, initiated by the state or individual actors.

We are also cognizant of the role of U.S. foreign policy in creating conditions of colonization, extreme poverty, terror, and hypermilitarization, forcing people to flee their homes. The Cáceres family has publicly stated it believes U.S. military aid has fueled repression and violence in the country which now has the highest murder rate in the world. Political violence and militarization have intensified since a military coup in 2009 overthrew the elected government of Manuel Zelaya. The Obama administration and then-Secretary of State Hillary Clinton provided tacit support for the coup.

But 2009 is not the first year the United States has interfered in the internal affairs of Honduras. U.S. Marines landed in Honduras to protect the economic interests of U.S. banana plantations, banks and railroads in the early and mid-1900s. In the '80s, Honduras was also used by the United States as a staging area for contras, a right-wing armed group heavily supported by the U.S. which attempted to sabotage and topple the leftist Nicaraguan government.

In addition to military intervention in the internal affairs of Central and South American countries, economic trade policies such as the 1994 North American Free Trade Agreement, signed by President Bill Clinton, are responsible for causing havoc and creating economic refugees forced to come here to seek a livelihood for their families.

In the Middle East and Africa, decades of militarized violence by the U.S. and governments it supports are responsible for hundreds of thousands of deaths resulting from the destruction of Iraq, the invasion of Afghanistan, drone bombings in Pakistan and Yemen, and the occupation of Palestine. This led to more than a million migrants and refugees fleeing to Europe in 2015. Dislocation of individuals and their families due to economic, political, and military reasons is happening on a massive scale all over the world.

Whatever form it takes, this dislocation is traumatic and violent. If we want to address the root causes of this crisis, we must address the corporate and governmental policies responsible for it. The decades-long U.S. political and military intervention in the internal affairs of countries such as Honduras combined with exploitative trade deals benefiting U.S. multinational corporations have led to what we are facing today.

Demagogic politicians seize upon the economic anxieties of working-class people in an attempt to get them to misdirect their anger toward immigrants and refugees, Latinos and Muslims, in particular. It is a classic formula of finding scapegoats reminiscent of Germany in the 1930s. As a recent local example, Governor Deal illegally attempted to stop the resettlement of Syrian refugees in Georgia and deny them federal aid. A whole group of people was branded as suspects based on their country of origin and their faith.

This atmosphere of increasing xenophobia, racism, Islamophobia, and homophobia demands that we confront hate and any attempts to divide us. We must build solidarity, locally and internationally, with all those who are under attack. Only by standing together as one can we all be made free.

[Paul McLennan is a member of the Organization for Human Rights and Democracy. Azadeh Shahshahani is Legal & Advocacy Director with Project South and a past president of the National Lawyers Guild. Adelina Nicholls is Executive Director of the Georgia Latino Alliance for Human Rights.]
Thanks to the authors for sending this article to Portside.
This article was made possible by the readers and supporters of AlterNet.
Following Supreme Court Split, Immigrant Communities Vow to Keep Fighting for Families
June 23, 2016
National Immigration Law Center
For more information contact: Juan Gastelum, gastelum@nilc.org, 213-375-3149

WASHINGTON — Having reached an impasse, the U.S. Supreme Court has voted 4-4 in one of the most consequential immigration cases in recent history, United States v. Texas. The High Court’s failure to fall one way or another in the case leaves in place a lower court decision that blocks the Obama administration’s deferred action immigration initiatives known as DAPA and the expansion of DACA from being implemented.

“The stakes in United States v. Texas could not have been higher: Millions have watched, and waited, for the Supreme Court to affirm the president’s authority to inject some common sense into our immigration system. Today, the eight justices failed to act, and countless families will suffer as a consequence. U.S. citizen children like Sophie Cruz will continue to live in daily fear that their mom or dad won’t be there one day to kiss them goodnight. And immigrant entrepreneurs like Cris Mercado won’t be able to reach their full potential.

“Immigrants and allies fought for and won these significant policy victories, which would have brought much-needed emotional and economic stability to millions of our community members, and we will not sit back. We urge the Department of Justice to seek a rehearing for when a ninth justice is confirmed for the Supreme Court. We will continue to fight back against anti-immigrant politicians, their allies, and their attacks on our families and communities. And we will explore all options to prevent more families from being torn apart.

“This politically driven lawsuit should never have made it this far: Two of the four Fifth Circuit judges who have considered the case noted rightly that Texas and other states simply did not have standing to bring it. Other state-driven anti-immigrant lawsuits were thrown out on the same grounds.

“With this case, the Court had an opportunity to provide clarity and guidance on executive power and to free up programs that would have tremendous social and economic benefits. Instead, they followed a troubling trend this term of failing to do the job the American people and the Constitution entrusted to them, due in part to the politicized vacancy on the Court.

“The stakes are now even greater for the November elections as the next president will have the opportunity to appoint several Supreme Court justices in their first term, shaping our country’s future for decades to come.  Immigrant communities are committed to continuing our fight for our families.”

The Obama administration announced DAPA and the expansion of DACA in November 2014. The two initiatives would allow certain immigrant parents of U.S. citizens and lawful permanent residents, as well as other immigrants who came to the U.S. as children, to apply for temporary work authorization and protection from deportation.

Texas and 25 other states sued the federal government to block the administration’s initiatives in December 2014. In February 2015, a federal district court judge in Texas ruled in Texas’s favor and blocked both DAPA and the expansion of DACA. In a decision issued in November 2015, a divided panel of the Fifth Circuit Court of Appeals upheld the district court’s order. Today’s decision by a deadlocked High Court means the Fifth Circuit’s nationwide injunction of the programs remains in place by default and that the case will be sent back to the lower courts for consideration—a prospect that worries many immigrants, given a recent extreme order by the federal district court in this case. 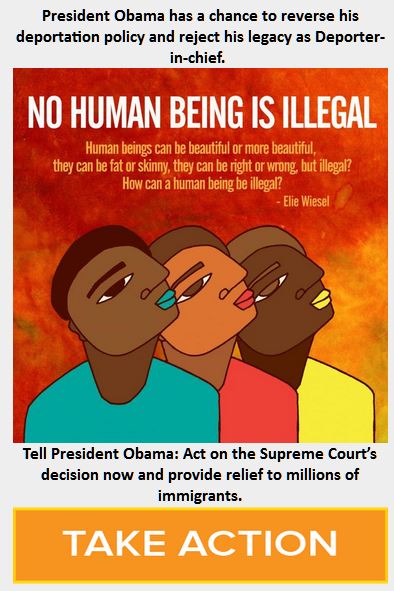 Presente.org
Now, more than ever, we need to renew our commitment to justice until all immigrants receive the dignity and fair treatment we deserve.
Tell President Obama: Act on the Supreme Court's decision now!
Unless the Obama Administration acts now, more than 4 million immigrants - our neighbors, friends, mothers, and children - will continue to be devastated by the deportation machine.2
No human being is illegal.
If enough of us raise our voices, the Obama administration won't have a choice. President Obama will have to stand with us. The Obama administration needs to use the Supreme Court's decision to implement administrative relief as quickly and as broadly as possible.
Sign this petition to tell the Obama administration to use his executive authority to help as many immigrant families as possible.
Thank you for all you do and ¡adelante!
Matt, Favianna, Oscar, Erick, and the Presente.org team.
Source URL: https://portside.org/2016-06-23/immigration-deportation-and-us-fore-gin-policy-following-supreme-court-split-immigrant