Penny Dreadful Is Proving that Misandry in Feminism Can Be Fun 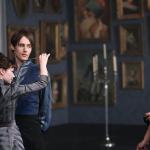 Feminism fueled by anger isn’t sexy or fun. These days, it’s all the rage to ask celebrities if they identify with the F-word. Regardless of whether they have any background in the subject, we treat their fame as though it gives them cultural authority and condemn them once they give the wrong answer. Many dance around it, because a wrong answer is all too easy: If you avoid it, you’re sexist, but if you embrace it too wholeheartedly, you’re an angry, shrill, unchill feminist.

Even when award-winning TV critics condemn popular shows for sexist bullshit, they feel the need to cloak their words in apologetic language and friendly bro-itudes. TV shows are aware of this, too: when shows dip into the topic, they either address the issue briefly before moving on (like the female-on-male rape scene in The Leftovers) or they surround it with other things to make it palatable (like Inside Amy Schumer — feminist sketches mixed with sex and fart jokes). Writers simplify the issue by making everyone who opposes female power a cartoonish psychopath (Game of Thrones) or they surround it with terrible people and make it altogether off-putting (Girls). But the gloriously gothic Penny Dreadful is throwing caution to the wind and embracing unabashedly angry feminism. In doing so, it’s accomplishing something strange and truly revolutionary: it’s making angry feminism, and even misandry, fun.

A brief primer, for those unfamiliar with Penny Dreadful: the show takes place in a fictional Victorian London where gothic creatures of the night exist, seances abound, and famous literary characters (Victor Frankenstein, Dorian Gray) mingle with original characters. Lily, played by Billie Piper, is a former prostitute who died and has been re-animated by the ambitious young Victor Frankenstein. At first, the newly alive Lily is a perfect Victorian lady: demure and docile. She doesn’t remember her former life and is so perfect that Victor falls in love with his own creation.

At the end of Season 2 — spoiler alert! — it’s revealed that her sweetness is an act. Not only does she remember her old life, but her experience as a prostitute has made her embrace misandry.

In Season 3, she uses her new immortality to recruit women who are in the same position she once was — whores — and incite them to rise up. Her methods are unconventional. They’re a mixture of her own seduction, as she invites them into bed with her male partner, and encouragements of brutality. “Go now to those dark streets you know so well,” she tells them. “Find me a bad man, a faithless husband, a cruel lover… Find him and bring me his right hand. Cut it off.”

This is not pleasant, easy-to-swallow feminism. It’s not politically correct. It’s everything other shows and celebrities reject when they shrink from the label of “feminism.” It’s bra-burning and violently rejecting the male presence and sticking it to The Man – and maybe even murdering him. It’s extreme. But it’s a form that so many shows avoid like the plague, convinced it can’t be fun for all viewers to watch. Lily and Penny Dreadful prove that notion is silly.

In one of her speeches to her army of whores at her murderous dinner parties, Lily says, “We are not women who crawl. We are not women who kneel. And for this we will be branded radicals; revolutionists. Women who are strong and refuse to be degraded and chose to protect themselves are called monsters. That is the world’s crime. Not ours.”

As a re-animated corpse, Lily, quite literally, is a monster — one of the show’s spins on Frankenstein’s monster — and yet Penny Dreadful is placing her biological nature as secondary to her politics. That gets the spotlight and the focus as her “monstrosity.”

And by mixing real rhetoric with its pulpy misandry, Penny Dreadful is cleverly making militant feminism compelling. Lily gives her speeches crawling across dinner tables while a pile of human hands sits in a bowl at the end. “Liberty is a bitch that must be bedded on a mattress of corpses” is an actual line she says, and it’s delightful. It’s hardly alienating to male viewers because it’s so damn fun to watch.

We root for Lily even though her plans are extreme, and we’re sad for her when her male lover betrays her. Dorian Gray — the same from Oscar Wilde’s novel — was all set to upend society by her side, but he grows upset when her plans for world domination seem to exclude him. Behind her back, he finds Victor Frankenstein, who has been developing a serum to make Lily docile again and “domesticate” her.

The show could easily skew this conflict in black-and-white, but it embraces the nuances. Rather than coming off like a cartoonish chauvinist, Victor is a heartbroken lover who is simply a product of his society: As innocuous women were part of his upbringing, he doesn’t understand why Lily wouldn’t want to take his serum.

“I can take all your anger and rage and make it go away,” he tells her. “Make you whole and human. Free from the burden of hate. Unblemished by sadness.” He doesn’t seem to understand when she responds, “My sadness is my own. I’ve suffered long and hard to be who I am. I want my scars to show.” Victor oppresses Lily, but his intentions are not malicious; his sexism not ill-intentioned — and therein lies Penny Dreadful’s brilliance.

Sexism doesn’t need to be pleasant and easy to swallow for a show to comment on it. Angry feminism doesn’t need to be a drag or a killjoy, either. The way Penny Dreadful navigates the issue is simultaneously serious and absurd. Most of all, though, it’s playful and fun to watch. The rest of television could learn a thing or two from Penny Dreadful’s approach. Samantha Bee might be making angry feminism cool again on talk shows, but Penny Dreadful stands alone in dramas.

At the end of the most recent episode, when Dorian and Victor have subdued Lily, she says, with the sting of betrayal, “You chained me.” Victor tells her it’s for her own protection and she says, “It’s for yours.” Lily is an angry feminist, but the show wouldn’t be nearly as captivating if she wasn’t. Her rage is what makes her scenes electric and what makes the show truly bold.