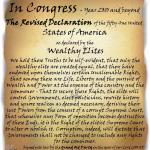 Later this summer, just a few weeks after this year's Fourth of July celebrations, Democrats will be gathering in Philadelphia to make some presidential nomination history.

Democrats - small-d variety - gathered in Philadelphia soon after the original Fourth of July, too. Those democrats, all Pennsylvanians, also had some history to make. In September 1776, they would go on to adopt their new nation's most egalitarian state constitution.

Before the Revolution, only men of property in Pennsylvania could vote and hold office. The new state constitution, notes historian Clement Fatovic in his recently published "America's Founding and the Struggle over Economic Inequality," totally removed property qualifications for voting and office-holding.

In the new and free Pennsylvania, declared teacher and mathematician James Cannon, "overgrown rich Men will be improper to be trusted."

Many citizens of the new Pennsylvanian "commonwealth" wanted this sort of egalitarian sensibility expressly written into their new constitution.

"An enormous Proportion of Property vested in a few Individuals is dangerous to the Rights, and destructive to the Common Happiness of Mankind," read one proposed passage for the new constitution, "and therefore every State hath a Right by its Laws to discourage the Possession of such Property."

The final constitution adopted didn't carry that exact language. But Pennsylvania's new state government did move quickly to discourage grand fortune. Before the end of 1776, the state had a progressive tax code that placed a new levy on the speculative holdings of rich Pennsylvanians.

A few years later, after the Revolution, lawmakers in the Pennsylvania Assembly carried that same spirit into the debate over a newly created state bank that many saw as concentrating the state's wealth in the hands of a few.

"The accumulation of enormous wealth," the official Assembly committee statement against the powerful bankers ran, "will necessarily produce a degree of influence and power, which cannot be intrusted in the hands of any set of men whatsoever, without endangering public safety."

A year later, the controversial state bank would see its charter revoked.

The Pennsylvania crackdown on concentrating wealth reflected a widespread agreement throughout the former 13 colonies that their new nation needed to become a much more equal place.

Large landowners, merchants, and affluent lawyers had dominated the political life of the British colonies. These powers-that-be expected farmers, artisans, and other laborers to know their place.

But the struggle for independence upset this "politics of deference." The colonial elites, explains historian Clement Fatovic, found it "more and more difficult" to reconcile "great disparities of wealth with the animating principles of the Revolution."

Basic rights like a free press and trial by jury, proclaimed Noah Webster of later dictionary fame, cannot contribute nearly as much to freedom as "a general distribution of real property among every class of people." To avoid the fate of failed ancient republics, the new American nation had to overcome a "vast inequality of fortunes."

Of course, not everyone in the new American republic shared that distaste for grand fortune. But even many of America's early rich tended to see extreme inequality as a danger to the new American project - and tended to support progressive taxation and other moves that would discourage great disparities in wealth.

"It is confessed on all hands," acknowledged the wealthy merchant Gouverneur Morris, "that taxes should be raised from individuals in proportion to their wealth."

Should any of this matter to us today? The generation of 1776, after all, did its thinking more than a couple of centuries ago. Outside the Fourth of July, how much attention should we pay to our Founders?

A great deal, contemporary defenders of privilege seem to think feel. Conservatives today claim to represent the spirit of 1776. The most in-your-face of them even call themselves the "Tea Party" to evoke that spirit.

Attacking grand fortune amounts to an attack on liberty, these Tea Party types - and their billionaire backers - pronounce. Only "limited government" can save us. And if limiting government means letting billionaires accumulate as many billions as they can grab, they assert, no harm done.

The actual leading figures in the generation of 1776 essentially believed just the opposite. They took, historian Clement Fatovic notes, "great pride in the relative economic equality they believed distinguished their country from those in Europe."

These attitudes should matter to us, his new book adds. The founders, Fatovic's "America's Founding and the Struggle over Economic Inequality" explains, were undertaking "an experiment in self-government."

"The recognition that this experiment could fail," the book notes, "made them highly sensitive to the conditions necessary for its success."

And no condition, many of those founders felt, would be more important than avoiding the staggering inequality so then common in Europe.

The developed world's most staggering inequality has now shifted over to the United States. That generation of 1776 would not be pleased.