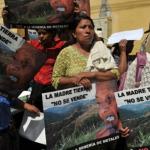 Recently, KWG Resources Incorporated, a Canadian mining company, posted a video online using women dressed in bikinis to promote the mining of chromite on Indigenous lands in northern Ontario, known as the Ring of Fire. KWG President Frank Smeenk defended his company’s actions saying “sex sells.” Perhaps this was the most honest statement of those in the industry.

Mining is about exploitation – not just of the minerals in the ground, but of women as well.

For decades, the primary focus of anti-mining, logging and oil and gas activists has been on the environmental destruction left behind by the extractive industry. It is also a fact that Indigenous peoples worldwide are disproportionately impacted by environmental destruction in their territories caused by these companies with the approval of state governments. Environmental racism has put all the profits in the hands of corporations at the expense of the health of peoples, plants and animals.

What is less known by the general public are the very unique traumas experienced by Indigenous women when corporations invade their lands and their bodies.

Indigenous women and little girls experience higher rates of sexualized violence from the frontline workers and security forces hired by national and transnational corporations seeking to exploit the natural resources on Indigenous lands. Many state governments have allowed these violent crimes against Indigenous women and girls to occur for decades without taking any substantive steps to hold these corporations accountable. This has resulted in massive human rights violations often ignored, denied, covered up by out of court settlements, or re-routed to confidential alternative dispute processes. The general public is kept in the dark about what these corporations are doing in the name of profit. What is happening is shocking, but gets very little media attention, and worse, very little action from law enforcement and public safety officials in state governments.

Hudbay Minerals Incorporated is a major transnational Canadian mining company that will face court proceedings in Canada for the reported murder of an Indigenous leader and gang rapes of Indigenous women from a Mayan Q’eqchi’ community located on lands near the mine. The rapes are said to have been committed by security forces hired by the Canadian mining company, Skye Resources – the previous owners of the mine before Hudbay purchased it in 2007.

Hudbay is also in legal troubles in Peru as protesters are calling them out for human rights violations attached to the Constancia mine – an open-pit copper mine. In Canada, Hudbay has used the courts and its own security forces to keep Indigenous peoples off their own lands to protect the Lalor mine in northern Manitoba.

Barrick Gold Corporation is a Canadian mining company and the largest gold mining company in the world. It has operated the Porgera Mine in Papua New Guinea since 2006 where it is reported by human rights activists that hundreds of Indigenous women and girls have been subjected to sexualized violence and gang rapes committed by the security forces hired by Barrick Gold. After much intervention by international human rights organizations, Barrick Gold finally admitted there was a problem, but not before hundreds of Indigenous women and girls were brutalized, some suffering permanent physical and mental injuries.

Acacia Mining, formerly known as African Barrick, is a subsidiary of Canadian mining giant Barrick Gold, operating primarily on the African continent. Human rights organizations have reported at least 50 cases of violence, beatings, rapes and gang rapes committed by security forces from the North Mara Gold mine on local villagers. Despite numerous interventions, it is reported that these human rights violations have not abated.

Anvil Mining Limited is a Canadian mining company located in the Democratic Republic of the Congo. They are being sued in a Canadian court by victims who claim that in order to protect its copper mine, the Anvil Mining provided logistical and other support to the Congolese military who are reported to have committed major human rights violations, on local Indigenous peoples, including tortures, mass graves and violent rapes.

Royal Dutch Shell is a multi-national oil and gas company and said to be the world’s second largest oil company. Shell has been criticized by the United Nations and numerous human rights organizations for the devastating environmental destruction and pollution its operations have caused, especially in the Niger Delta in Nigeria. Human rights watchdogs reported that Shell fueled violence and death in Nigeria by providing funds to rival violent gangs. The Ogoni people live in abject poverty, while billions of dollars of oil were pulled from their territories. During the conflict, Shell’s funding of violent gangs resulted in hundreds of destroyed homes, the alleged killing of 80 people and the gangs rapes of many Indigenous women.

Unocal, or Union Oil Company of California, is an American petroleum company that became a wholly-owned subsidiary of the Chevron Corporation. In the 1990s, Unocal was part of a consortium, in partnership with Myanmar’s (formerly Burma) military government to construct a gas pipeline. Court documents show that Unocal knew about the Myanmar military’s many human rights abuses, but hired them anyway to provide security for their pipeline project. As a result, Unocal’s hired hands are said to have committed grave acts of violence on Indigenous peoples including forced relocations, forced labour, tortures, murders and rapes. After many court proceedings, Unocal eventually settled the claims out of court.

Whiting Petroleum Co. is reported to be the largest producer of oil in the Bakken oil fields in North Dakota. Other top-producing companies in the Bakken oil fields include Continental Resources Inc., Hess Corp., EOG Resources Inc., and Statoil ASA. Some of these companies house their workers in large “man camps” which have led to a massive crime wave in North Dakota, especially directed at women. The increase in crime includes violent acts of assault, murder, rape and human trafficking. Indigenous women from the Three Affiliated Tribes (Mandan, Hidatsa and Arikara Nation) report increases in gang rapes and human trafficking of Indigenous women and girls as a result of these man camps. North Dakota has now soared to 8th highest incidents of rape in the country as a result.

Closer to home in Canada, the Alberta tar sands have been blamed for the dramatic increase in cancer rates in First Nations as well as increased violence against women. The tar sands are just one example of corporate violence against land, water and Indigenous peoples. Indigenous women and girls in Canada already experience disproportionately high rates of sexualized violence including high rates of murders and disappearances. This has led the federal government, under the leadership of Liberal Prime Minister Justin Trudeau to call for a national inquiry into the murders and disappearances of Indigenous women and girls. There were many critiques of the inquiries limited terms of reference, which focus generally on systemic discrimination patterns in governments, but little mention of the role of corporate colonization and sexualized violence in the crisis of murders and disappearances.

If this inquiry is to get at the heart of this crisis, it needs to shine a light on all the dark places, including the obvious link between the extractive industry and violence against Indigenous women and girls.

Dr. Pamela Palmater is an Associate Professor and Chair in Indigenous Governance at Ryerson University.