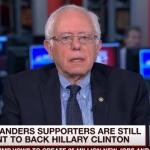 Reiterating why he thinks it is crucial for the future of the country, as well as the planet, that Republican nominee Donald Trump not be elected U.S. president, former Democratic candidate Sen. Bernie Sanders called on his supporters Friday to "think hard" before casting a protest vote.

"Let us elect Hillary Clinton as president and that day after let us mobilize millions of people around the progressive agenda which was passed in the Democratic platform."
—Sen. Bernie Sanders

"Look, I was a third-party candidate. I began my career running as a third party, getting 2 percent and then 1 percent," Sanders said on MSNBC's "Morning Joe." "I'm the longest serving independent in the history of the U.S. Congress, but I think that before you cast a protest vote, because [Hillary] Clinton or Trump will be president, think hard about it. This is not a governor's race. It's not a state legislative race. This is the presidency of the United States."

The remarks were made one day after new polling found that roughly a third of likely voters aged 18-29 are considering voting for a third party candidate. Sanders said that he understands that voters are "not enamored" with their choices, but emphasized the importance of looking "at the issues."

"If you are a working person, do you really think that billionaires need a large tax break? Which is what Trump is proposing. If you are an ordinary American who listens to science, do you think its a good idea that the President of the United States rejects science and says that climate change is a hoax?" he asked. "I think that if you look at the issues—raising minimum wage, building infrastructure, expanding healthcare—Clinton, by far, is the superior candidate."

Sanders said he hopes that, ultimately, a rejection of the bigotry that has been "the cornerstone of Trump's campaign" will deliver voters, particularly young voters, to Clinton.

"You can disagree with Clinton on this and Trump on that, but...this country has spent...hundreds of years fighting against racism and sexism," he said. "To have that debate again—young people do not want to see that, they are waaaay beyond that. They don't want to think we're blaming Muslims and Mexicans for our problems. I think that will bring a lot of those people around."

"And I would say to those people out there who are thinking of the protest vote, think about what the country looks like and whether you're comfortable with four years of a Trump presidency," he continued. "Stay focused on the issues that are relevant to your life."

"And I would suggest to those people, let us elect Hillary Clinton as president and that day after let us mobilize millions of people around the progressive agenda which was passed in the Democratic platform."

Earlier, he appeared on CNN's "New Day" and similarly emphasized that "the only way that we ever make real change in this country is when people come together at the grassroots level."

And, he noted, the only way that the progressive agenda has a shot at being implemented is with Clinton at the helm and that grassroots force as her guide.

"The day after Hillary Clinton, as I hope, is elected president," he vowed, "I will do everything I can to sit down with her and say, President-elect Clinton, this is what the Democratic platform is about. We worked together. Let's start implementing. Raising the minimum wage. Public colleges and universities tuition free. Transforming our energy, creating millions of jobs rebuilding our infrastructure. Taking on Wall Street. Let's get to work representing working families."

Lauren McCauley is a staff writer for Common Dreams.