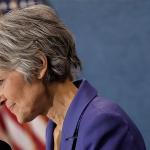 [In These Times is dedicated to providing an accessible forum for strategic debate on the Left. In this Up for Debate series, we host a range of views on what has become a divisive question: how to approach voting in the November presidential election.]

Like Sanders, the Green Party's Jill Stein has become a symbol. Progressives and radicals are rightfully tired of having to hold their noses and choose between two bad options. Stein’s campaign seems to offer an alternative. Outside the twin evils of hawkish neoliberalism and thinly veiled white nationalism sits a party that can sincerely claim to be united behind solidly progressive demands: transitioning to 100 percent renewable energy by 2030, rejecting the Trans-Pacific Partnership and implementing a $15 minimum wage, among others. These are changes that could make a real difference in the lives of America’s worst-off, and potentially save the planet we all live on from ecological collapse.

Unfortunately, those changes won’t come from Stein or the Green Party.

While liberals love to harp on Stein for her views on Wi-Fi signals and vaccines, the Left should have more serious concerns. The problem isn’t that Stein holds a few fringe views, or even that she’d serve as a spoiler.

It’s that the Green Party’s stumble toward the presidency falls into the same traps that plague conventional Democratic Party politics: putting too much emphasis on the presidency and the electoral process itself, while declining to undertake the kind of deep organizing necessary to alter the state of play in these arenas. The result, for the Greens, is a politics too interested in being right, and not enough in actually taking state power.

“It is necessary,” the Italian Marxist Antonio Gramsci wrote, “to direct one’s attention violently toward the conditions of the present as it is, if one wishes to transform it.” Today, those conditions are as follows: Sanders, an avowed socialist, has just won 22 states, some 12 million votes nationwide and 46 percent of pledged Democratic Party delegates. According to an Economist/YouGov poll released in April, he also happens to be our most popular politician. Social movements from Occupy Wall Street to the DREAMers are changing this country’s political weather and racking up landmark victories. The political revolution the Sanders campaign sparked promises to carry on—both by Sanders (see “Whose Revolution?”, page 32) and the movement leaders who increasingly see the Democratic Party and electoral fights as winnable terrain.

Stein, however, won’t win. In 2012, she garnered just 0.4 percent of the vote. Perhaps more troubling is the state of the party itself. A November 2015 official Green Party fundraising plan lamented the poor state of party finances. Donors, apparently, have fled in droves, citing “ineffectiveness” and “infighting.” The plan’s authors wrote:
In our view, you need at least two things to get donors to give: A good reason to give now [and a] belief that giving to this organization will have concrete results, or make a real difference. The Green Party finds it difficult to impossible to deliver on these items.

They go on to admit that the party also features “little unity around any purpose or plan at all, much less one that would attract and retain lots of new people.”

To paraphrase its own document: The Green Party does not have a plan to build power. To paraphrase every semi-conscious leftist I’ve talked to in 2016: The Left needs a plan, electorally and otherwise.

While the above document was released 10 months ago, there’s little evidence anything has changed. The Green Party’s website still links to a strategy from 2013 that calls for developing a plan for winning electorally.

For the Stein campaign, though, politics is a battle of ideology, not power—no concrete plans required. “If you have to lose an election to establish your power, you have to do that,” Stein argued in a recent interview. The Left has never needed to be more interested in winning than it does in 2016, using every tool available—the Democratic Party included—as a means to that end.

“It’s hard to have a revolutionary campaign inside of a counterrevolutionary party,” Stein has stated again and again. Yet that’s exactly what far-right insurgents have spent the last six years building, morphing the Republican Party into one more radical and reactionary than ever.

To be fair, the party has also invested some of its meager resources into local elections. There are 137 Green Party officeholders across 16 states, including city councilors and school board members.

But that’s not where the party’s heart is. Rather than lifting up these local Green Party runs and wins, Stein’s strategy as party spokesperson is to collapse the differences between Donald Trump and Hillary Clinton, and cast Republicans and Democrats as two sides of the same rancid coin, with Greens as the gold standard. Stein told Democracy Now’s Juan González in July, “If we want to defeat Donald Trump, it’s very important that we really rally and unify ... around a truly progressive campaign. Hillary Clinton represents the opposite of that.” Vote your conscience, Stein says, and Trump will—somehow—crumble.

If the history of transformative change in this country offers any lessons, from the New Deal to the Civil Rights Movement, it’s that electoral campaigns will never be the be-all and end-all of politics—just one field of struggle among many.

Demonstrations, strikes and civil disobedience have always been effective outlets for working-class political power, staking out key victories on everything from women’s suffrage to immigration reform—in some cases by putting the issues themselves on the ballot. Where Sanders framed his campaign as an extension of movement fights onto an electoral platform that the Left could win, Stein sees righteous struggle by a marginal party as synonymous with success. “The struggle is a win in itself,” Stein told Jacobin’s Bhaskar Sunkara in August, “to be standing up and refusing to be silenced in the face of a predatory corporate, capitalist political system.” Refusing to be silenced is a noble goal, but calling out the mainstream media is no substitute for building a movement and electoral force too big for major outlets to ignore.

Perhaps Stein’s greatest fault, then, is in mistaking a Sisyphean campaign and a few minutes in the voting booth every four years for revolution—the Left’s own twisted version of “I’m With Her.” Her candidacy distracts from the slow and hardly glamorous work that organizers and progressive electoral challengers alike are doing to change the rules of the game, day in and day out. In fetishizing the party’s position as outsiders, Stein also feeds into a dangerously limited view of what the Left is now capable of achieving.

Fifty-three percent of Americans want to raise the minimum wage, and nearly as many want to see it set at $15 an hour. Forty-three percent support the Black Lives Matter movement. Concern over global warming is at an eight-year high. Faced with daily police shootings and looming climate catastrophe, the Left desperately needs to win. Doing so involves infiltrating every level of government and playing every card in the deck.

As Sanders’ campaign has helped to clarify, the Left is more popular and powerful than it has been in decades. There is now a real chance to elect hundreds of progressive and even radical leaders to office, and pose a serious challenge to statehouses, city councils and even Senate seats long held by the status quo. Coupled with militant, disruptive grassroots movements, these drives can shift the political weather where it’s already turning: against the Democrats’ business as usual, and toward a fairer society. There is an alternative to Trump and Clinton, but it won’t come from Jill Stein, or by this November.

[Kate Aronoff is a writing fellow at In These Times covering the 2016 election and the politics of climate change. Follow her on Twitter @katearonoff.]